An Equal Pay Day lemonade stand in 2016 in Washington, D.C. President Joe Biden's agenda emphasizes his commitment to ending race and gender pay gaps, and many believe the tiny but powerful Office of Federal Contract Compliance Programs will help that push.
MOLLY RILEY/AFP via Getty Images

The Biden administration already has started to revamp a small but mighty U.S. Labor Department office that the Trump administration wanted to eliminate in 2017 and became the Trump White House’s enforcer of controversial policies on religious rights and diversity training.

The Labor Department’s Office of Federal Contract Compliance Programs enforces federal anti-discrimination laws and affirmative action obligations among federal contractors, who employ about 25% of the U.S. workforce. The agency’s diminutive budget and staff, clocking in at just over $106 million and just under 500 full-time employees, contrasts with its substantive enforcement authority.

The agency went through several evolutions under former President ; from teetering on the verge of absorption into the Equal Employment Opportunity Commission, to executing major policy priorities, like limiting “white privilege” training for employees of federal contractors. Under President, and the leadership of Jenny Yang, a veteran in the area of workplace civil rights, the agency is expected to pivot back to the aggressive hiring and pay discrimination enforcement that it was known for during the Obama era.

The agency has the authority to audit the hiring and pay practices of private companies to eliminate discrimination, as long as those companies hold government contracts. Other civil rights entities in the government don’t have that power. 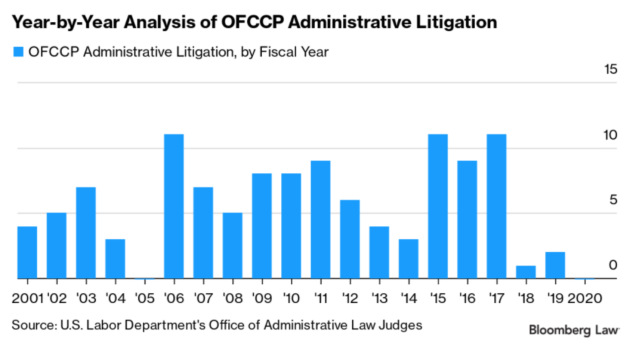 The Trump administration saw the agency as a valuable conduit for some of its trademark policies, including religious liberty. The OFCCP proposed a rule in August 2019 codifying and expanding liability shields religious federal contractors can raise against bias allegations. The Trump rule now faces challenges in court.

That rule was finalized last month, enraging civil rights groups that advocate on behalf of lesbian, gay, bisexual, and transgender workers, who view it as weaponizing religious liberty against these employees and more. But some religious groups welcomed the clarity the rule provided.

The Trump administration again turned to the OFCCP to carry out a now-rescinded executive order on limiting “divisive” diversity training federal contractors can provide for their employees. The controversial order was issued after companies vowed to boost workforce diversity in the wake of the killing of George Floyd.

“Towards the end, you really saw some of the more extreme perspectives of this administration really coming to the fore for this agency,” said Pamela Coukos, a former Obama-era OFCCP senior program adviser. She now works with employers to strategize ways to support stronger workplace diversity and inclusion.

“It’s wild to me that corporate diversity training is suddenly sort of the most radical thing someone can be doing,” she said.

The OFCCP under Trump also inquired about and diversity commitments in the context of laws limiting race as an employment consideration, an unusual move from the agency meant to enforce anti-discrimination and affirmative action requirements.

Under Trump, the agency shifted to collaborating with contractors to prioritize contractor compliance with its policies—a change from the Obama administration’s emphasis on enforcement and lawsuits.

“The focus was contractor education and we become much more collaborative with industry liaison groups which, in my opinion, is a good thing,” said Samuel Maiden, who served as the southeast regional director for the agency dating back to 2014, and recently retired.

Leen and other agency observers expect a return to more enforcement litigation.

“I would anticipate a very robust enforcement program, and I think federal contractors need to be ready for that,” Leen said. “Ultimately, the goal of enforcement is of course to correct the problem in that given case—but it’s also to serve as a deterrent, and as an incentive, for companies to comply who are not in litigation.”

Trump-era agency director Leen also said that the OFCCP may even look to collect pay data from federal contractors in some form. The agency collected data during the Clinton administration, and sought to do so again during the Obama administration, though that venture never came to pass.

However, the Biden’s OFCCP director Yang spearheaded a collection during her time at the EEOC, indicating that the Labor Department could do the same.

“It’s going to be a reset, and I think it will be a positive reset,” Obama-era OFCCP director Shiu said. “To that extent, I think OFCCP is going to play an important role,” because federal contractors employ a large portion of the American workforce.

The Labor Department declined several requests for an immediate interview with Yang.

Many are watching how the agency, and Biden, will approach pay bias enforcement after the agency’s loss in a high-profile lawsuit against . The litigation lasted for the entirety of the Trump administration before an administrative law judge shot down the Labor Department’s claims that Oracle owed $400 million in lost pay to women and minorities.

How the agency actually goes about enforcing persistent pay disparities moving forward will likely be a top item for the agency, according to Jaime Ramon, a former OFCCP director under the George H.W. Bush administration.

“The agency has always struggled with finding the right equation to measure compliance,” Ramon said, and they particularly grappled with finding the acceptable factors to consider when rooting out pay disparities. “One of the factors that needs to go into the equation is comparing apples to apples and oranges to oranges.”

Leen said the agency is in good hands with Yang.

“That’s going to bring a lot of attention and focus to the agency, so I think it’s really well-situated to make a big impact in the equal employment opportunity world, for the good,” he said.