The U.S. Court of Appeals for the Fifth Circuit trashed the rule in its opinion issued Nov. 12. The all-Republican, three-judge circuit panel deemed the regulation illegal and probably unconstitutional, suggested it was conceived in bad faith, and focused on its economic costs while underplaying its potential benefits and the pandemic’s toll.

The Fifth Circuit is one of 12 federal appeals courts that could end up hearing a consolidated case against the Occupational Safety and Health Administration’s temporary for large employers. Republican attorneys general, business groups, unions, and others that sued in individual courts—more than 30 petitions have been filed—must follow multi-circuit procedure for their challenges to be included. The court to handle the consolidated case initially will be selected via a lottery scheduled for Tuesday.

“President Biden’s Covid-19 vaccine strategy will turn on the luck of the draw in the multi-circuit lottery,” said Lawrence Gostin, a law professor and director of Georgetown University’s O’Neill Institute for National and Global Health Law. “If conservative judges hear the OSHA case, it is looking increasingly likely that President Biden’s agenda would be in great jeopardy.”

While the U.S. Supreme Court likely will have the final say on whether the rule survives judicial review, the appeals court’s decision could set the table for the justices by framing the debate and raising which legal—and potentially constitutional—questions will determine the vaccinate-or-test regulation’s fate.

The three Fifth Circuit judges who halted the rule—although unlikely to sit on the panel to hear the case if that court wins the lottery— signaled the hostility to the OSHA rule among some federal appellate jurists.

Partisanship is a rough proxy for how judges might react to OSHA’s vaccine mandate rule. Republican-appointed judges are expected to be more skeptical than their Democratic-appointed colleagues, legal observers said.

Seven of the 12 circuits courts that have received petitions have Republican majorities. Four of those circuit courts have more than twice as many Republican-appointed judges than jurists selected by Democratic presidents. 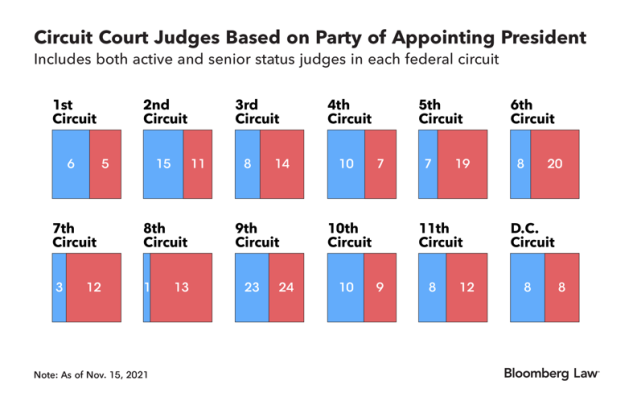 The case eventually will be assigned to a three-judge panel of the circuit that wins the lottery. That means a partisan majority circuit-wide doesn’t guarantee the panel will have the same majority, unless it’s the Eighth Circuit, which has only one Democratic-appointed judge. The lottery might not settle the issue, since parties can petition circuit courts to transfer the case elsewhere.

The Fifth Circuit’s opinion that extended its earlier administrative stay—which can be lifted by the court that wins the multi-circuit lottery—shows just how bad it could be for the Biden administration if it’s unlucky.

Legal scholars slammed that ruling, written by Trump-appointed Judge Kurt Engelhardt and joined by Judge Kyle Duncan—also a Trump appointee—and Judge , who was tapped for the bench by the Reagan administration.

“This is judicial activism of the worst kind, judges imposing their will against the government’s attempt to safeguard the health and lives of millions of workers,” said Jack Beermann, an administrative law professor at Boston University. “The government is attempting to save lives. The court seems more concerned with fighting the culture war over the vaccine.”

The Fifth Circuit opinion called the pandemic a “purported ‘emergency,’” characterized the rule as an effort to increase “vaccine uptake” as if that doesn’t increase worker safety, and pronounced that it failed its cost-benefit analysis without weighing its costs and benefits, Beerman noted.

The ruling gets some details of the regulation wrong, such as the fact that remote workers and employees that labor in isolation are exempt from the regulation, said Dorit Reiss, a law professor at the University of California Hastings College of the Law who specializes in vaccine policy.

The opinion also leaves out relevant details, including the number of people who’ve died from Covid-19 and OSHA’s estimate that its emergency temporary standard will prevent 6,500 worker deaths and 250,000 worker hospitalizations over the next six months, Reiss said.

The Fifth Circuit panel incorrectly stated that the rule requires workers to choose “between their job(s) and their jab(s)” because it has an option for testing, said Glenn Cohen, director of Harvard University’s Petrie-Flom Center for Health Law Policy, Biotechnology, and Bioethics.

The Biden administration faces a real challenge to show the emergency rule is necessary to address a “grave danger,” but the opinion eschewed even-tempered analysis in favor of scorched-earth polemics, Cohen said.

The Fifth Circuit ruling also goes beyond the issue of OSHA’s statutory authority and raises the type of constitutional issues that could limit administrative agency power beyond emergency temporary rules for the workplace, legal observers said.

While not deciding on constitutional grounds, the circuit panel said the rule likely exceeds the federal government’s power under the Commerce Clause because it regulates non-economic activity.

But the Covid-19 pandemic has decimated the economy broadly and has had profound effects on individual workers, which are the types of economic effects that clearly give the federal government authority to regulate, said Robert Field, a professor of law and public health at Drexel University.

“I don’t see how you could make the argument with a straight face that preventing Covid doesn’t have a significant economic effect,” he said.