Women and workers of color in the private sector are more disadvantaged in pay because they often aren’t privy to the wages of their colleagues like government employees. They fare better in federal agencies because of the government’s more rigid and transparent pay structures, though that rigidity at times can cause problems for women, particularly those who’ve been out of the workforce for long periods of time.

President-elect has made clear that closing racial and gender wage gaps is a priority, and said in his agenda for women that collecting pay data from private employers is a strategy for doing so. The U.S. Equal Employment Opportunity Commission approved this sort of a collection during the Obama administration, but the action was halted during the Trump administration.

A Government Accountability Office report published last month shows that while gender pay gaps for public employees have narrowed, there’s a need for more data on the disparities.

The EEOC annually collects workforce data from government agencies, “but GAO found these data were not sufficiently complete,” particularly when it came to “identifying potential barriers to career advancement.” Comparing pay for White men with that of different groups of women, the report found that the largest unexplained pay gap was between White men and Black women, followed by American Indian women, Latinas, White women, and women of Asian, Hawaiian, or Pacific Island origin.

“You can’t figure out how to solve the problem without fully understanding the problem,” said Jasmine Tucker, director of research at the National Women’s Law Center. 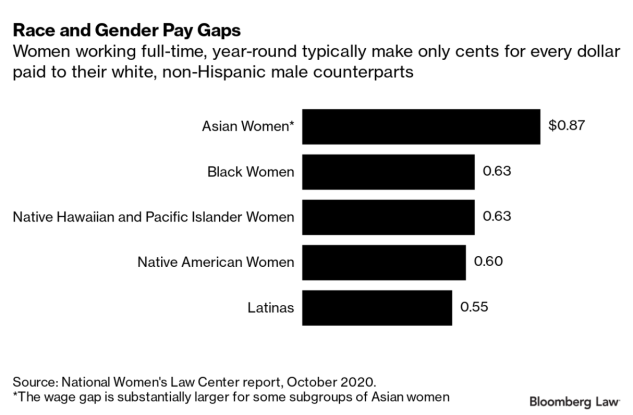 Based on U.S. Census Bureau data, women make 82 cents for every dollar earned by their male coworkers, according to a NWLC report published in October. The group, which advocates for equal pay, sued the Trump administration and the EEOC after the initiative to collect workforce pay data was halted in 2017. Under a court order, the EEOC initiated a one-time pay data collection from private employers.

The EEOC is studying how to proceed with some form of a data collection, but that report won’t be complete until the end of the year.

“The world doesn’t fall apart by a little bit of regulating, and trying to put a little fairness into the world,” said Fordham University School of Law professor Tanya Hernández.

The EEOC has “no enforcement mechanism” for getting federal agencies to comply with its data requests, or for forcing agencies to provide the best data possible, said Cheri Cannon, a partner at Tully Rinckey PLLC in Washington, who represents agencies, employees, and contractors in labor and employment disputes.

“There’s so many mandates to comply with data calls. There’s not enough manpower to do all of them,” Cannon said.

The EEOC declined to comment on its collection methods and Biden’s pledge to prioritize private-sector pay data collection. The Biden transition team didn’t respond to a request for comment.

Funding may be easier to come by for federal agencies after Biden is sworn in, particularly if Democrats wind up in control of the Senate after a runoff election in Georgia, Cannon said. If Democrats win both seats, they would create a 50-50 split in the Senate, with Vice President ‘s deciding vote giving the Democrats control of the chamber.

But to really make a dent in the problem, Congress must get involved and ensure that agencies make gender equity a top priority by giving the EEOC more enforcement power, perhaps by holding up agency funding if they don’t comply with EEOC data requests, she said. That likely would involve changing laws and regulations to make agencies more accountable—a tough task if Republicans keep control of the Senate, Cannon said.

After the EEOC’s Obama-era attempt to initiate the collection of pay data from private employers and the contentious litigation that ensued, fair pay advocates still believe that the only way to greater transparency for workers in the private sector is more information.

“If the EEOC treated the private sector like the federal sector, we might see more progress,” said professor Donald Tomaskovic-Devey of the University of Massachusetts Amherst. He studies the processes that generate workplace inequality.

Federal agencies generally do a better job than the private sector when it comes to ensuring pay equity, particularly at the hiring stage, Cannon said. “If you meet the qualifications, it’s pretty blind,” meaning that personal considerations that could allow bias are largely kept out of the equation by the rigidity of the federal hiring process, she said.

“The government is doing reasonably well in getting women into higher graded positions,” said Jeff Neal, the top human resources official at the Department of Homeland Security during the Obama administration.

Among the agencies that still face issues are those with law enforcement missions, he said.

“That’s a part of our society that hasn’t adapted as well,” both among federal agencies and at state and local law enforcement departments. Some federal agencies, such as the Secret Service and the U.S. Marshals Service, expect law enforcement officers to be away from home for long periods of time, which also can make it harder to recruit women in the first place, Neal said.

Managers in the government also sometimes ignore the data that’s available to them, Neal added.

“Agencies aren’t poring over the data to see what’s going on. They are making a lot of decisions based on what they believe to be true,” he said.

The National Women’s Law Center found in its most recent report that Latina workers make 55 cents for every dollar paid to male, White colleagues. Hernández, who has worked in both the public and private sectors, said a “squeamishness” exists among private-sector workers, making pay a taboo subject for discussion.

“Information is power,” she said.