The Biden labor transition team has been weighing feedback from business groups as the incoming administration prepares to issue a nationwide rule to protect workers from Covid-19, foreshadowing prompt action after Inauguration Day.

President-elect ‘s agency review team for the Labor Department has been holding calls with industry associations for at least a month to solicit input on a range of economic and safety issues related to the pandemic, business lobbyists from four trade groups told Bloomberg Law.

The listening sessions have allowed business advocates to make a case about the burdens employers would face in complying with an overly stringent or vaguely worded emergency regulation requiring businesses to take steps to prevent workplace coronavirus infection, the sources said. All spoke on condition of anonymity because they weren’t authorized to share private conversations, and declined to have their organizations be identified.

Labor unions and other worker advocates also have been in touch with the transition to advocate for a strong regulation, several sources said. They’re encouraging the incoming administration to take other steps to move away from the Trump Labor Department’s preference to engage in compliance assistance with employers while reserving punitive enforcement for the most egregious actors.

The conversations will inform briefings the review team plans to submit to Biden’s political personnel at DOL’s Occupational Safety and Health Administration, who will likely begin crafting the rule once they’re installed after the transfer of power. Gauging business-community opinion can help smooth the incoming administration’s effort to issue an emergency workplace regulation, and boost OSHA’s prospects of developing a standard that can survive potential legal challenges.

Biden has pledged to reverse what he’s described as the Trump administration’s failure to leverage OSHA’s enforcement powers to protect workers from contracting Covid-19. Labor Secretary has maintained during the pandemic that an emergency workplace rule isn’t necessary to protect workers, preferring instead to issue voluntary guidance. Worker advocates have filed a series of legal challenges to force an emergency rule.

Biden said in a statement last month that his administration will direct OSHA to “determine whether to establish an emergency temporary standard to keep workers safe from COVID-19.” The stimulus proposal his team debuted Thursday asked Congress to give OSHA authority to write an emergency rule that covers workers who are normally excluded from the Occupational Safety and Health Act, such as railroad employees and miners.

OSHA’s traditional rulemaking process can take years to complete and involves several attempts to seek public input. But Biden’s team is under pressure to quickly advance an emergency rule, as the virus continues to spread at workplaces, adding to the number of workers claiming jobless benefits. 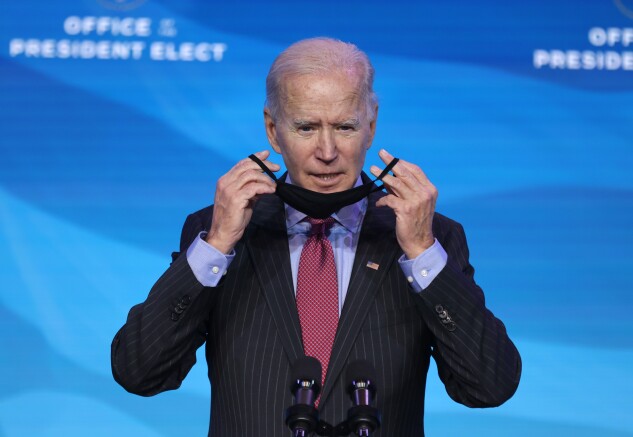 By communicating with business groups as part of its preparation, the transition shows that it understands “they’re facing the greatest occupational health crisis since OSHA was created 50 years ago,” said Debbie Berkowitz, an OSHA official during the Obama administration.

“They don’t have the luxury of spending a couple of months and trying to figure things out,” said Berkowitz, who is now worker safety and health program director at the National Employment Law Project.

The business lobby recognizes that an emergency rule is inevitable in some form, and is trying to share employer-specific concerns in hopes that Biden’s OSHA leaders will craft a measure capable of safeguarding employees without hampering economic recovery, according to one source who participated in a listening session.

During calls with business groups, transition officials have been told about problems employers have had in complying with the emergency rule California’s occupational safety agency issued last year. The state requires employers to develop and implement a coronavirus infection prevention program, including mandatory mask policies, using physical barriers to protect workers, and maintaining social distancing. It also established requirements for testing and notifying workers of infections.

The National Retail Federation and National Federation of Independent Business filed a lawsuit last month asking a state judge to vacate the California standard due to what the groups predicted would be “ruinous” costs on employers.

Businesses objected, in particular, to a provision mandating paid leave for workers suspected of being exposed to the virus.

The way employer groups reacted to the California regulation in relation to emergency rules other states have adopted underscores how litigation risks are linked to the decisions Biden’s OSHA leaders will make.

“I hope, if in fact the Biden administration does go forward with an emergency temporary standard, that they take a close look at what Michigan and Virginia have done, which our members did not deem to be unworkable, versus what California did, which was deemed to be overly burdensome and totally unworkable for even the best-intentioned employer,” said Edwin Egee, the National Retail Federation’s vice president for government relations and workforce development.

The Occupational Safety and Health Act says the agency may write the standard without any notice or opportunity for public comment. OSHA must show as part of the rulemaking that employees are exposed to a new, “grave danger,” and that an emergency standard is necessary.

The transition’s informal talks won’t necessarily be a substitute for continued dialogue with the business lobby after Biden takes office.

“I think it’s a great thing that all stakeholders are providing input,” said Bradford Hammock, who co-chairs the workplace safety and health practice at management-side law firm Littler Mendelson. “But I would suspect as part of any process that if there’s going to be a push to do an [emergency temporary standard], hopefully the agency does everything it possibly can to formally get some comment and opinions from stakeholders once the president-elect is sworn in.”