A mural of Rosie the Riveter at the Knight School of Welding in Louisville, Ky., in December 2020.
Photographer: Luke Sharrett/Bloomberg

President Joe Biden is aiming to boost popular support for his infrastructure plan by including proposals to help workers and protect unions.

Biden’s $2.25 trillion plan calls for $100 billion for workforce training programs, including services for dislocated workers—the first proposal that spends serious money on such programs since the pandemic-linked economic downturn. The White House is also seeking to double the number of registered apprenticeships.

The plan released Wednesday — dubbed the American Jobs Plan — would also require businesses benefiting from an infusion of infrastructure funds to pay prevailing wages and stay neutral in union organizing efforts. And it called on lawmakers to incorporate a bill (H.R. 842) that would strengthen workers’ ability to form unions and win contracts.

“I support unions,” Biden said Wednesday at an appearance in Pittsburgh, the same city where he kicked off his presidential run at a union hall in 2019. “They built the middle class and it’s about time they got a piece of the action.”

Biden Pitches $2.25 Trillion Plan to ‘Bring Everybody Along’ 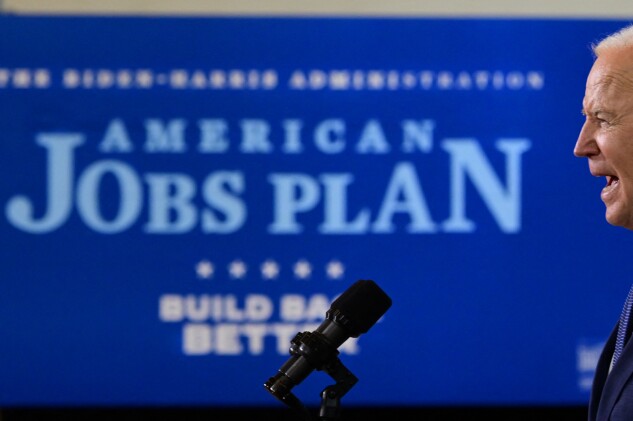 Unions will play a central role in ensuring government-funded projects are done efficiently, said Diane Swonk, chief economist at accounting firm . The plan could also increase demand for high-skilled construction workers, giving organized labor a chance to retrain workers who were laid off during the pandemic-fueled recession.

“It’s something we desperately need. One of the hardest things we have to do is train construction workers for this kind of work,” Swonk said.

Worker training in earlier pandemic relief legislation was “not even a rounding error,” said Andy Van Kleunen, CEO of the National Skills Coalition, which advocates for expanded job training.

The Biden proposal would fulfill investments sought by the Skills Coalition and other groups. Van Kleunen said the proposed investment in training along with new physical infrastructure was a major strength.

“We’re finally getting to the point of a real workforce investment that rises to the level of challenges we have with folks permanently displaced by this recession,” he said.

About 700,000 workers a year took part in registered apprenticeships before the pandemic. The proposal calls for adding one to two million apprenticeship slots as part of $48 billion total spending on worker training. It would also direct $40 billion to help jobless workers through the Department of Labor’s Dislocated Workers Program, and $12 billion to include women and people of color in workforce development.

Another $12 billion would go to construction and technology for community colleges, which play a central role in training workers for many skilled trade jobs.

Georgetown University’s Center on Education and the Workforce estimated this week the Biden plan would create more than 15 million jobs, including 8 million for workers with a high school diploma or less. The White House said the plan “will create millions of good-paying jobs,” but didn’t include specific projections.

The national median pay for construction workers was about $37,000 a year in 2019, according to the Bureau of Labor Statistics, below median pay for all U.S. workers of about $40,000.

Training may be an especially important function for unions given the Biden administration’s focus on green energy jobs that would require a new army of skilled workers, Grant Thornton’s Swonk said.

Businesses groups are likely to be wary of any pro-union bill rolled into the infrastructure package. The House passed the Protecting the Right to Organize Act, or PRO Act (), in March, but it’s unlikely to advance in the Senate, where it’s opposed by Republicans. The measure would bar employers from retaliating against unionization efforts, protect workers’ right to strike, and override state “right to work” laws that allow employees to opt out of paying dues in unionized workplaces.

The Chamber opposes the proposed expansion of organizing rights but hasn’t taken a position on Biden’s infrastructure plan. A press aide didn’t respond to a request for comment.

Democrats are considering advancing Biden’s infrastructure agenda using budget reconciliation, a procedure that allows them to bypass the need for Republican votes in the Senate. Reconciliation can only be used for provisions with budget effects, so it isn’t clear it can be used to advance the PRO Act with the rest of Biden’s plan.

Rep. (D-Va.), chair of the House Education and Labor Committee, said the proposal reflected many of his panel’s priorities.

“I applaud President Biden for his leadership in proposing a plan that ensures all Americans can share in this recovery, and I look forward to working with my colleagues to translate this vision into legislation that we can put on the president’s desk,” he said in a statement.