’s immigration overhaul seeks to allow more skilled foreign workers into the U.S. without stirring widespread protest from labor groups, whose opposition would all but ruin prospects for what is already one of the president’s most precarious priorities.

The sweeping proposal Biden sent to Congress on his first day in office drew quick Republican opposition over its centerpiece: a faster path to citizenship for 11 million undocumented immigrants in the U.S. Another provision would allow more foreign students and workers to enter the U.S. by increasing the number of employment-based green cards.

Business groups view the proposal as a way to increase the supply of coders and other skilled tech workers for U.S. companies without raising caps on programs such as the H-1B visa for high-skilled workers.

Companies like ’s Google, and . have for years pressed to increase the number of tech workers allowed into the U.S., saying they need engineers from countries like India because there aren’t enough skilled Americans. But efforts to expand the workforce through H-1B visas have drawn a backlash from unions and immigration opponents, who argue that the companies overlook U.S. talent to hire foreigners at lower salaries.

The Biden proposal seeks to sidestep a conflict with organized labor by leaving the annual H-1B quota untouched. The measure instead clears a path for more foreign workers to eventually enter the country by eliminating a decades-long backlog of people waiting for employment-based green cards, which grant permanent legal residence and are capped at 140,000 per year under current law.

“This bill, signed into law, would be a tremendous improvement for legal immigration in this country,” said , president of FWD.us, an immigration advocacy group founded by tech industry leaders. 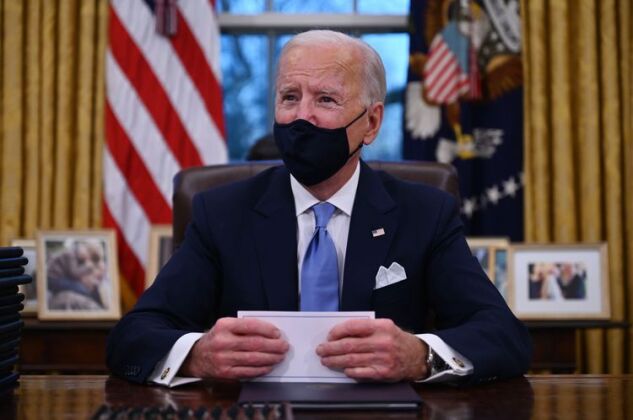 President Joe Biden in the Oval Office on the first day of his Presidency, on Jan. 20.
Photographer: Jim Watson/AFP/Getty Images

Business group leaders have discussed an immigration overhaul with Democratic and Republican staff in the House and Senate, according to industry officials working on the issue. The talks have focused on finding areas of bipartisan consensus that can help advance an overall package, including keeping science-technology-engineering-math graduates in the U.S.; providing legal status for so-called Dreamers, undocumented immigrants brought to the country as children; and streamlining the employment-based visa system.

AFL-CIO President praised Biden’s framework as “bold” and said its path to citizenship “will help to raise standards for all workers.” The labor group declined to comment on the proposed changes to the employment-based visa system.

“You’re dealing with the individuals who are already here in the U.S. versus this narrative that foreign workers are coming to the U.S. and taking jobs,” Nair said.

Even so, unions’ views on the measure could change dramatically as lawmakers hash out details of the legislation.

Biden’s proposes to recapture unused visas from prior years and eliminate per-country caps for employment-based green cards, which could benefit Indian information technology professionals who sometimes wait decades to gain permanent U.S. residence. The plan would also exempt spouses and children of green-card holders from the annual quota, which some advocates estimate could double the number of employment-based cards.

“There are tensions there that are real,” said , a law professor at Florida International University who focuses on immigration. “In terms of skilled labor, I could see some potential impact there.”

There’s debate over whether tech companies in the U.S. need to import workers. Engineers and IT personnel are among the hardest positions to fill, according to the Manpower Group, and businesses say that as a consequence, they’re forced to look for foreign workers. But immigration opponents say the U.S. labor pool is sufficient, pointing to the number of Americans who receive degrees in computer science or related fields.

The Biden administration is “espousing the tired talking points of the U.S. Chamber of Commerce and others who benefit from a wellspring of inexpensive sources of labor,” said Kevin Lynn, executive director of the group U.S. Tech Workers, which supports lower levels of U.S. immigration and opposes outsourcing jobs.

Lynn said that the coronavirus pandemic’s devastating effect on the U.S. job market is even more reason to hold off on proposals to open the door to more foreign workers.

“I’m befuddled why they would push expansionist immigration policies at a time of so much job insecurity,” Lynn said.

Biden’s immigration proposal stands little chance of passage in its current form because of a longstanding partisan divide over granting undocumented migrants access to citizenship -- a policy derided as “amnesty” by many Republicans. But the president’s plan likely will be an outline for Democrats in Congress as they write a comprehensive immigration bill.

White House Press Secretary said Wednesday she wouldn’t comment on the measure’s prospects because it hasn’t been formally introduced in Congress.

The White House will have to pull off a balancing act to unite forces on the left -- labor groups and immigrant-rights advocates -- if it hopes to pass the overhaul into law and fulfill one of Biden’s core campaign promises. Key Republican senators have already denounced Biden’s plan meaning that Biden will need strong support from Democrats.

And a path to citizenship -- not increasing the number of foreign workers -- remains the dominant issue for immigrant-rights advocates, said Lorella Praeli, co-president of Community Change, one of the groups leading the campaign to promote Biden’s plan.

“We have to continue to build momentum toward winning freedom for all 11 million and reforming and transforming our whole system,” Praeli said.

Biden’s proposal attempts to keep overseas students who earn advanced science and technology degrees in the U.S. by giving them a faster track to permanent residence. It would help guest workers who already hold H-1B visas by making work authorization for their dependents permanent, and preventing their children from aging out of the system.

Biden’s plan also acknowledges concerns of labor groups. It grants the Department of Homeland Security the power to raise or lower the number of green cards available based on economic conditions and enact rules to encourage “higher wages for non-immigrant, high-skilled visas to prevent unfair competition with American worker.”

Companies that employ foreign workers are anxious to see changes to the legal immigration system, especially after Biden’s early slate of executive actions stopped short of immediately repealing former President ’s pandemic-related visa curbs. Biden’s orders directed a review of many Trump migration policies with the aim of eventually rolling them back.

While immigration advocate Schulte praised the bill, he urged the Biden administration to follow through on its commitment to use executive power to repeal Trump’s visa bans that the business community has said are hurting the economic recovery from Covid-19.

“Patience is running out,” he said.

Business groups, including the U.S. Chamber of Commerce, Business Roundtable and FWD.us, have sought to build support for a broad immigration overhaul that includes a path to citizenship -- especially for Dreamers.

Allowing more skilled foreign workers into the U.S. once enjoyed strong support in the Republican Party, but it may be a less powerful enticement for GOP lawmakers following Trump’s presidency. He sought to restrict both legal and illegal migration to the country, hardening the party’s stance, and routinely demonized immigrants as threats to both U.S. security and American jobs.

Senator , who co-sponsored a bipartisan immigration overhaul in 2013 that included a citizenship path for undocumented migrants, denounced Biden’s bill as a “non-starter” that will give “blanket amnesty” to people living in the country without authorization.