The U.S. Department of Labor proposed rescinding a Trump-era rule that subjected union funds to stricter transparency requirements, a decision that the agency argued won’t hinder the federal government’s ability to deter corruption in organized labor.

The department’s Office of Labor-Management Standards published a proposal Wednesday to scrap the 2020 rule, which had required unions with at least $250,000 in annual receipts to disclose information about their credit unions, strike funds, apprenticeship programs, and any other trust they maintain.

Under Director Jeffrey Freund, one of the Biden administration’s earliest labor appointees, the agency halted enforcement of the rule in March, before unions faced a deadline to start submitting the new “Form T-1" disclosures the regulation had mandated.

The 2020 rule is “quite duplicative” of unions’ existing disclosure mandates, Freund said in an interview. He added that there’s “a serious question about” whether the agency has statutory authority to demand these new forms. The agency will now consider that issue as it solicits public comment for the next 60 days to inform a final decision on withdrawing the rule.

The agency will continue to enforce unions’ longstanding annual obligations to file detailed financial information—including receipts on funds diverted to trusts—in so-called LM-2 reports, which are required for all unions with annual receipts exceeding $250,000, Freund said.

The move to erase the Trump rule, though it had been expected since March, provides fresh ammunition to critics of organized labor to blast the Biden administration and, specifically, its steadfast support of unions.

Union watchdog groups and business lobbyists contend the Trump regulation was needed to curb the type of corruption that fueled the embezzlement scandal plaguing the United Auto Workers, which resulted in multiple convictions and guilty pleas and a federal monitor being appointed to oversee the union for six years.

The sweeping federal probe of UAW and Fiat Chrysler Automobiles NV found that union leaders and company executives raided union funds for personal use—including money that was filtered through the union’s job training center—among a host of other crooked actions. 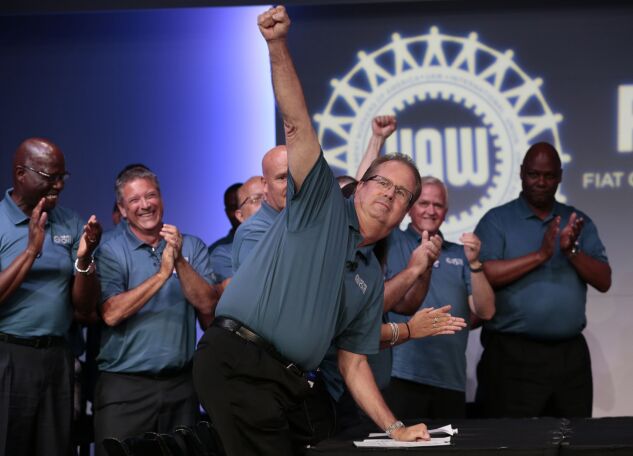 “As we have seen from the recent UAW scandal, strike funds and similar entities can be a source of malfeasance, and the lack of disclosure definitely contributes to that possibility,” said Sean Redmond, executive director of labor policy at the U.S. Chamber of Commerce.

The T-1 form the Trump rule created would have required UAW and other unions to file more detailed, publicly available disclosures about their job-training funds and other trusts. Had the rule been in place, critics of organized labor say, the UAW scandal could’ve been averted.

“Union members should be able to see how their leaders are managing all aspects of their union to reduce the risk of such corruption, and the T-1 would have helped them do that,” Redmond added. “One has to wonder what the motivation is for this decision.”

Government agencies, including OLMS, uncovered the UAW-Chrysler scheme, investigated it, and won multiple convictions—all before the T-1 rule was issued, Freund said.

“There’s a whole regime of reporting requirements that are there that capture much, if not all, of the data that T-1 was intended to capture,” Freund said. He pointed to Form 5500s, which DOL’s Employee Benefits Security Administration collects from union benefit trusts, and the 990 forms that some union subsidiary organizations must file with the Internal Revenue Service.

“Why anyone would think that folks who fraudulently filed 990s and 5500s would then in turn honestly file T-1s is a head-scratcher to me,” he added.

The UAW, in a prepared statement issued through spokesman Brian Rothenberg, said the union’s current collective bargaining agreements, reached with Detroit automakers in 2019, provide members with more financial information about the union’s trusts than would’ve been disclosed under the T-1 rule.

The T-1 rule was part of a trio of late-term measures the Trump administration pursued in the area of union oversight. The other two were never finalized, likely meaning they were dead on arrival once Biden took office.

One proposal had sought to make public-sector mid-level union chapters subject to the same level of financial oversight as private-sector unions.

The other was meant to increase the amount of financial information the wealthiest unions are required to submit to the DOL, with a particular focus on ones that take in $8 million or more a year. That rule had called for more detailed reporting of separate strike funds, investment and asset sales, lobbying disclosures, and payments made to a single officer from more than one union.

(Updated with additional reporting, starting in the sixth paragraph.)