As the clock ticked down toward a crippling US rail shutdown, the Labor Secretary switched tactics -- a breakthrough would need Italian food, patience and a big-name closer.

, a former Boston mayor and veteran of labor disputes, hosted a marathon 20-hour session that stretched into the evening Wednesday and the early morning that followed. If he failed, supply chains would face a fresh crisis and the fallout would ripple coast to coast.

Hopes were slim for an agreement, so they ordered dinner -- a spread of baked ziti, salad and cannolis -- and brought up a special guest on Zoom: President , who implored the rail giants and labor leaders to redouble efforts.

Failure was not an option, Biden said, building on a long pressure campaign waged by his senior aides, one that included a warning that Congress would not step in to avert a crisis.

Five hours later, a tentative deal was reached -- it was Walsh who called the White House with the news, announced a few hours later. Biden, a staunch union advocate, took a victory lap Thursday morning but questions remain about whether rank and file members will share his praise of the deal. 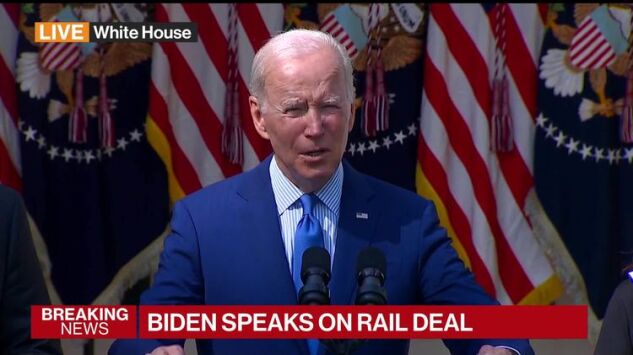 President Joe Biden hailed a tentative agreement railroads and unions reached to avert a work stoppage that threatened the US economy. “This agreement is a big win for America,” Biden said in a speech from the White House Rose Garden on Thursday.
Source: Bloomberg

When he called in to the talks at about 9 p.m., the president repeatedly said that failing to reach a deal was not an option, according to people familiar with the call who requested anonymity to discuss what was said. But he didn’t put his thumb on the scale.

“We had a long way to go yet,” said Jeremy Ferguson, president of the SMART Transportation Division. “He wanted to hear from us, what we needed to get to where we were and how he could answer our questions.”

Biden urged both sides to make compromises, underscoring the widespread damage to the economy that Americans would grapple with if freight trains stopped moving, the people said. Union advocates and officials familiar with the call said that Biden’s involvement was pivotal in getting both sides to agree, with one saying it was unclear how negotiations would go at the time Biden called.

A work stoppage would have snarled supply chains and fueled red-hot inflation, while putting Democrats at greater risk of losing control of Congress in the November midterms. Instead, the president is coming away with a deal that could prove to be a validation of his negotiating skills.

Biden joked during an Oval Office meeting Thursday with negotiators, top aides and Cabinet officials, ahead of his formal remarks, that he could not believe the participants were “still standing.”

Unions still must vote to ratify the preliminary deal, while the White House said a “cooling off” period will be extended past the votes to ensure that a rejection won’t immediately trigger a work stoppage. It’s not a guarantee that union members -- who have been furious with employers for years over working conditions -- will ratify, according to one person familiar with the negotiations.

The railways will continue to run during that period and key freight from corn to cars will reach its destination. A rail stoppage could have cost the economy roughly $2 billion per day.

Companies began curtailing shipments of hazardous materials and new automobiles this week in anticipation of a shutdown, a preview of the economic damage that could have been wrought by a strike.

A work stoppage also could have had calamitous effects on passenger railroads. Outside the Northeast Corridor, Amtrak and commuter rail lines run trains on rails owned by freight companies. preemptively canceled all long-distance trains starting Thursday, but said after the agreement was reached it was working to “quickly restore” train service to normal.

The cancellations didn’t affect travel in major eastern cities such as New York and Washington, where Amtrak operates its own lines.

Freight carrier announced Thursday it was resuming normal operations, including lifting an embargo on hazardous materials and other sensitive shipments. also said it would immediately restore typical operations including those that had been curtailed.

“They’re really the backbone of the economy,” Biden said of the railroads.

Senator said he’d heard concerns from railroad officials about a possible strike and was pleased to see a deal come together.

“I hope it works out and is ratified today,” the West Virginia Democrat told reporters.

The tentative freight-rail agreements include a 24% wage increase over five years, 2020 through 2024, including 14.1% effective immediately, as well as five annual $1,000 payments, the National Carriers’ Conference Committee representing railroads said.

The deal also includes new medical leave policies, according to two unions, a key concession to labor groups that had held out for the ability to miss work for health emergencies without being fired or reprimanded. Rail workers will receive one additional paid off day per year plus the ability to take unpaid leave for medical procedures or doctor’s appointments.

“This is a win for tens of thousands of rail workers, and for their dignity -- and the dignity of their work,” Biden said, adding that it also showed unions and management can work together “for the benefit of everyone.”

Shares of major freight railroads rose in early trading Thursday after the deal was announced before paring those gains during the regular session. CSX declined 3.4% by the close while and Norfolk Southern eked out gains of less than 1% each.

The administration’s involvement dated back months but ramped up this week as talks approached a breaking point. Biden sought a full briefing on Sunday, after attending a Sept. 11 memorial, and became personally engaged in the talks Monday after a weekend negotiating session between Walsh and the two sides failed to yield a deal.

As union leaders arrived at the Department of Labor Wednesday morning, they didn’t believe they would come to a deal. “We didn’t expect an agreement to come out of this,” said Ferguson.

When no deal was reached by lunch, the group believed they were headed toward a strike, according to a union official involved in the talks.

Biden received updates throughout Wednesday, including during a visit to the Detroit auto show, where he espoused the virtues of union labor. Biden convened a meeting of senior staff Wednesday evening after returning to the White House, getting the latest on talks before calling in.

Biden’s advisers made clear to negotiators during the final stretch that congressional action was not a viable way to avert a strike and that they had to make a deal themselves. Federal law gives Congress the power to intervene to stop a rail strike, but officials said there were not enough votes in the Senate on a single way to do that.

After Independent Senator blocked a resolution from Republican to force the two sides to accept the recommendations of a presidential emergency board, union leaders said it became clear only their negotiations could avert a shutdown.

“The fact that Congress stayed out of it was very pivotal,” said Dennis Pierce, president of the Brotherhood of Locomotive Engineers and Trainmen.

Biden called in to a video chat around 9 p.m.

Hours later, Walsh phoned the White House around 2 a.m. on Thursday morning to inform officials a deal was coming together, triggering a frenzy of calls and preparation. White House officials began to wake up people in advance of an agreement. One union had to stir awake board members to get sign-off on the deal.

At 5 a.m., Biden announced the deal in a paper statement.

“For the American people, the hard work done to reach this tentative agreement means that our economy can avert the significant damage any shutdown would have brought,” he said.