At his first presidential campaign rally in 2019, then-candidate told workers at a Pittsburgh union hall he needed their support to win. Now, Biden is running out of time to return the favor.

The self-described “most pro-union president” faces an ever-narrowing window to persuade Congress to pass a stalled measure to revamp federal labor law—legislation unions believe is essential for future organizing and membership growth.

With Biden’s poll numbers in poor shape and Democrats in danger of losing the House and maybe the Senate in November’s midterm elections, the next nine months could be Biden’s last chance to pay back a constituency that will be crucial to the Democratic Party’s prospects in 2024.

Biden did plenty to help organized labor during his first year in office, highlighted by $1 trillion infrastructure package that promises to create union jobs in construction. He’s publicly supported workers seeking to unionize, appointed union advocates to key positions, sought ways to use executive power to advance organizing, and begun to reorient federal labor agencies in workers’ direction. On Friday, he’s expected to sign an executive order that will help unions get work for members on federal construction projects.

But union leaders are keenly aware that most of those executive actions could easily be undone by the White House’s next occupant, leaving them saddled with federal labor laws that benefit employers and make organizing a far greater challenge.

Congressional gridlock hasn’t helped, but unions watch in frustration as Republicans and a few Democrats, backed by the Senate filibuster, deny Biden the kind of legislative victory that former President Franklin Delano Roosevelt won in his first term, when the National Labor Relations Act, which guarantees every private-sector worker the right to collectively bargain, was signed into law.

Biden still has abundant support from unions and their allies, who say he’s already shown them more support than former Democratic presidents Barack Obama and Bill Clinton ever did. But Biden’s record with unions may rest on whether he can win over a handful of Democratic senators who are blocking changes to the 60-vote requirement to advance legislation in the Senate, thereby preventing the Protecting the Right to Organize Act (H.R. 842), the biggest piece of pro-union legislation in a century, from becoming law.

“We want to unpack everything that’s been accomplished so that people do see what a difference this administration has made, and then also hold folks accountable,” AFL-CIO President said in an interview. “We want to see things like the Pro Act passed, but the outdated rules in the Senate are what’s holding everything up.” 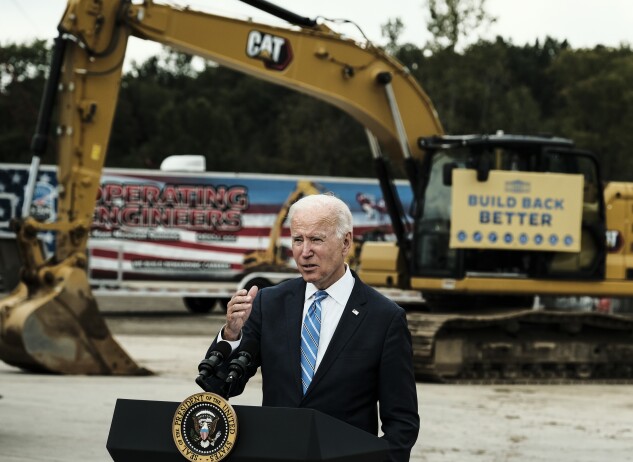 President Biden stumps for his Build Back Better tax and social spending legislation during a visit to the International Union of Operating Engineers Local 324 training facility in Howell, Mich., in October.
Photographer: Matthew Hatcher/Bloomberg via Getty Images

Unions are hoping that a major part of the bill—allowing the National Labor Relations Board for the first time to assess monetary penalties against labor law violators—could become law through Biden’s tax and social spending package, which is also stalled. Under current labor law, employers who violate its terms can only be held responsible for back pay, which worker advocates say isn’t much of a deterrent.

“To me, that is the centerpiece of why it has been so challenging for working people, especially in the private sector, to form unions,” Shuler said.

Despite a wave of strikes that garnered public attention in 2021, the share of private-sector workers who belong to a union fell to 6.1%. Union density, overall, has been cut in half over the last four decades.

The AFL-CIO, the country’s largest labor federation, has waged a steady pressure campaign against the handful of Democratic senators standing in the way of filibuster reform and passage of the Pro Act, especially (D-Ariz.) and (D-Va.).

Sen. (D-W.Va.), who supports the Pro Act but not changes to the filibuster, this week called Biden’s social spending bill “dead,” raising more doubts about monetary penalties ever becoming law.

Conceding congressional dysfunction, unions over the last year have tried to force changes by mobilizing activists to pressure companies and lawmakers.

After weeks of pressure from labor leaders, Biden released a video in Feb 2021 expressing support for Amazon workers trying to unionize a warehouse in Bessemer, Ala., and warning employers about the consequences of interfering with workers’ rights.

For unions, it was proof that Biden—unlike his Democratic predecessors—was willing to use his bully pulpit to support their cause. He also showed support for striking workers, criticizing management for hiring permanent replacements.

“The administration, I think, went out of their way to be pro-worker in every way, from actually saying words like ‘union’ and ‘labor'—which we haven’t always had, even with Democratic presidents,” said House Labor Caucus Chairman (D-Wis.).

Unions hope that a groundswell of activism will break the logjam in Congress, eventually.

“If you look at U.S. history, we’ve rarely passed any laws that make it easier for workers to form unions, to bargain collectively; and when we did, it was not just the result of a genteel discussion,” said Rep. (D-Mich.), a former union organizer. “It was because of social forces and pressures out in American workplaces.”

On the agency level, Biden’s appointees have been taking incremental steps.

National Labor Relations Board General Counsel Jennifer Abruzzo, who took over after Biden fired the agency’s Trump-era top lawyer on Inauguration Day, has been especially active for workers. This week, she directed the agency’s regional offices to pursue court orders against employers who have threatened workers during organizing drives. She’s also sought to increase compensation for workers who suffer reputational damage and loss of professional standing as a result of unfair labor practices.

Labor Secretary , the first union member to lead the department in nearly half a century, has consistently championed organized labor, meeting Kellogg’s workers on the picket line and brokering a deal that ended a nine-month strike for nurses in Massachusetts. The department has increased its focus on workplace safety and now faces an important test in implementing the infrastructure law, a measure that is a boon for the building trades unions, though not necessarily for organized labor as a whole.

It remains to be seen whether that will be enough to mobilize unions to turn out for Democrats in November.

Biden won 57% of union households nationwide in 2020 compared to 40% for former President Donald Trump, helping him carry Michigan and Wisconsin. But a majority of union households backed Trump in Ohio and Pennsylvania, showing that support for Biden from that group of voters is far from guaranteed.

For union voters, the state of the Covid-19 pandemic and inflation could make all the difference.

“The states that matter in 2022 will also determine 2024, and they’re the states that decided 2016,” said Steve Rosenthal, a political consultant working to turn out union voters in Pennsylvania.

“You’ve essentially got the future of the free world and democracy in the balance in Michigan, Wisconsin, and Pennsylvania—three states where the labor movement has historically and recently played a significant role,” he said.