Worker advocates are discreetly making a case for President-elect to fire the National Labor Relations Board’s top attorney, fed up by what they view as his attacks against organized labor.

Current and former union officials began discussing before the election how to pressure Biden to oust NLRB General Counsel a Trump appointee whose term expires in November 2021, seven current or former Democratic NLRB officials and union attorneys said. Most requested anonymity to divulge discussions that haven’t been made public.

The legality of such a move is untested, and there’s no indication the Biden transition team is considering it—but the effort continues. A spokesman for Biden’s transition didn’t respond to emails and a phone call seeking comment.

Organized labor and its allies want the Biden administration to undo the NLRB’s many pro-management moves under , and they see removing Robb as a necessary first step.

Biden’s pledge to build strong ties with organized labor will put pressure on him to consider unions’ plea, especially if it picks up momentum as the transition progresses. But the possibility of Republicans maintaining Senate control increases the political risk of taking such an action.

Supporters of ousting Robb point to his record of siding with employers in many major cases and seeking to rein in NLRB regional offices. They say a U.S. Supreme Court decision earlier this year could give Biden greater legal cover to take action.

“He’s basically been a vehicle for the National Right to Work Committee in any and all ways that they sought,” said Michael Anderson, a partner at pro-union firm Murphy Anderson PLLC, referring to a conservative legal group that opposes mandatory union fees.

“If we’re ever going to get back to the National Labor Relations Act as it existed under the Obama Administration, Robb’s got to go,” he added.

Bloomberg Law asked the NLRB for an interview with Robb. In an email statement, spokesman Kevin Petroccione said, “Such a move by the incoming Administration would be without precedent, justification, or legal rationale.”

‘Sky Has Not Fallen’

Robb, speaking Wednesday during a Federalist Society conference held via Zoom, touted efforts during his term to reduce case backlogs, upgrade the agency’s outdated technology, and protect workers—including from unions that might not be representing them properly.

He acknowledged his polarizing reputation, but suggested unions’ claims about him are overblown—twice noting he still has a year left in his term.

“The sky has not fallen as some had predicted, but the case law has changed,” he said.

Some union advocates are weighing whether removing Robb could hurt Democrats. The NLRB, once known for its collegiality, has had partisan fights during Trump’s term. Removing Robb could deepen partisanship on the board and alienate the business lobby.

“I’ve heard discussion about it by some people who have stronger views than I do,” said a Democrat who served as NLRB chairman from 2011 to 2017.

Since taking office in November 2017, Robb has antagonized Democrats and union leaders with pro-employer moves while exerting more control over the board’s network of regional offices.

Union officials are quick to note that the NLRB general counsel, as the board’s chief prosecutor, is supposed to defend union rights.

Craig Becker, general counsel for the AFL-CIO and a former Democratic NLRB member, previously accused Robb and the Republican-controlled NLRB of trying to “silence and oppress” workers through what he views as distorted interpretations of labor law. Becker declined to comment for this article.

Robb, formerly a management-side attorney, was an enemy of organized labor well before he joined the Trump administration. He played a key role in a landmark 1981 case that dissolved the Professional Air Traffic Controllers Organization, which critics consider a watershed defeat marking the beginning of a decline in union membership nationwide.

Robb raised the ire of career agency officials shortly after his 2017 confirmation with a short-lived plan to centralize control over field operations and reduce the lifespan of investigations. The NLRB general counsel has broad control over personnel and operating procedure in 26 regional offices.

The following year, he brokered a settlement in a massive unfair labor practice case involving McDonald’s that questioned whether the fast-food giant was responsible for violations committed by franchisees and contractors. An administrative law judge rejected it as inadequate, but the board ultimately approved its terms: McDonald’s paid $170,000 and was absolved of any direct responsibility as a joint employer. 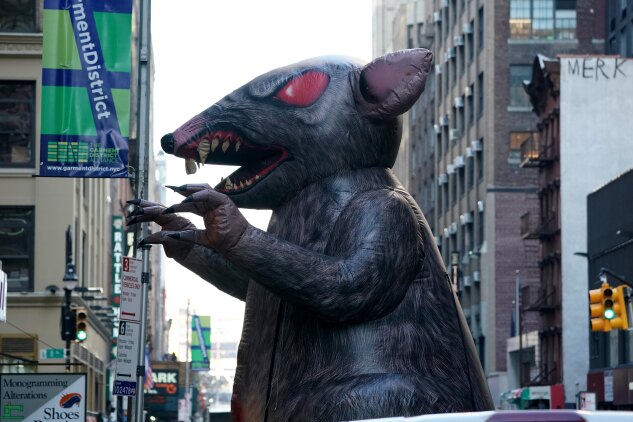 Robb also has changed procedures for evidence, requiring staffers to inform potential whistleblowers that they may face federal charges or discipline from their employer if they hand over video or audio evidence that wasn’t obtained legally.

More recently, Robb has waged a personal war against “Scabby the Rat,” an inflatable rodent often deployed at union demonstrations of businesses. Robb has argued that use of the anti-union symbol is unlawfully coercive despite First Amendment speech protections.

Worker advocates say that if Robb serves out his term, it will guarantee that management interests prevail in matters handled by the general counsel’s office for most of 2021.

“I don’t know that anyone has the inclination, the courage, the guts to want to test this, but it’s an interesting proposition,” said Wilma Liebman, a Democrat who served as board chair during the Obama administration. “It’s being discussed.”

Current and former union officials pointed to the U.S. Supreme Court’s Seila Law v. Consumer Financial Protection Bureau June 2020 decision that the president has authority to fire the CFPB director. The CFPB and the NLRB are both independent agencies not under direct White House control, meaning the same precedent could apply to Robb.

The high court’s opinion limited but didn’t overturn its 1935 ruling in Humphrey’s Executor, which protected members of quasi-legislative or -judicial regulatory panels from being fired without cause. By contrast, the president may fire independent agency heads that wield significant executive power—a description that could apply to the NLRB general counsel, union advocates say, though it’s unclear whether federal courts would agree.

The National Labor Relations Act appears to make a distinction between firing board members versus a general counsel.

The law says that board members can be fired by the president “for neglect of duty and malfeasance in office, but for no other cause.” But it makes no stipulation for the general counsel, leading some scholars to conclude that the president can fire a general counsel for any reason, or none at all.

Firing Robb may prove unwise, some say, given that Republicans would still hold a 3-1 majority on the board until August 2021, when GOP member William Emanuel’s term expires. If Republicans retain the upper hand in the Senate, Democrats will have a hard time getting nominees confirmed, including a permanent replacement for Robb.

Firing the general counsel could scuttle chances of brokering a package deal with a possible GOP-controlled Senate to keep the board from losing a quorum in 2022, when GOP Chairman John Ring’s term expires.

Biden would create a political firestorm if he took such a step, but wouldn’t gain much from it, said a former Republican NLRB official, requesting anonymity to speak freely.

Robb, speaking to the Federalist Society from a location in Florida, warned the audience that Tropical Storm Eta could sever his internet connection. But he just as well could have been talking about a political storm in Washington.

“If I disappear entirely, then you may be able to say that you were present at the last speech given by the general counsel,” Robb said. “But I hope none of that interference happens.”

—With assistance from Robert Iafolla and Josh Eidelson.