Members of the United We Dream organization participate in a demonstration outside the U.S. District Courthouse on July 19, 2021, in Houston, Texas in response to Judge Andrew Hanen ordering the U.S. government to block new Deferred Action for Childhood Arrivals applicants.
Photo: Brandon Bell/Getty Images

The Biden administration has little room to maneuver on protections for young immigrants after a federal judge determined a key program was unlawful.

Government officials must address both procedural questions and core legal issues in the Deferred Action for Childhood Arrivals policy after the U.S. District Court for the Southern District of Texas remanded it to the Department of Homeland Security for “further consideration” on Friday.

The program, established by former president Barack Obama, has provided legal status and work authorization to hundreds of thousands of immigrants brought without authorization to the U.S. as children. The court ordered the government to stop granting new applications, but didn’t revoke status from those who’ve already received it. 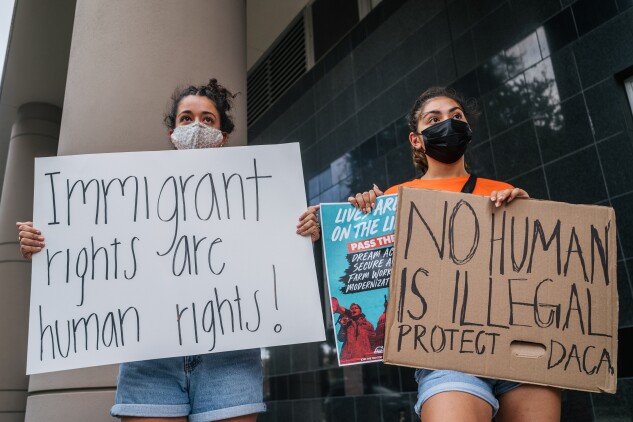 The ruling intensifies pressure for a legislative fix in the Senate, where a path forward remains uncertain. DHS is continuing work that was already underway on a regulation to shore up the program, but the effort may come up short unless Justice Department lawyers win their planned appeal of Friday’s ruling.

In his 77-page ruling, U.S. District Judge Andrew Hanen concluded that DACA—created in a series of memos in 2012 and 2014 —not only short-circuited required rulemaking procedures, but also violated federal immigration law.

“If Judge Hanen’s ruling stands in full force, it would be difficult for the Biden administration to save the program even with full notice-and-comment rulemaking,” George Mason University law professor Ilya Somin said.

Hanen rejected DHS’s defense of the program as within the bounds of its prosecutorial discretion—traditional agency authority to decide how to spend limited resources by prioritizing some types of enforcement over others.

DHS’s discretionary authority “does not extend to include the power to institute a program that gives deferred action and lawful presence, and in turn, work authorization and multiple other benefits to 1.5 million individuals who are in the country illegally,” Hanen wrote.

Hanen sided with Texas and other states that argued that DACA should have been authorized by Congress.

“The judge essentially made the decision saying you didn’t do this through the correct administrative procedure, and if you do this down the road, I’m probably still going to strike it down,” said Jose Magaña-Salgado, director of policy and communications for the Presidents’ Alliance on Higher Education and Immigration, a nonprofit group of U.S. college and university leaders.

The court’s interpretation leaves little room for DHS to put DACA on solid legal ground, said Lora Ries, a senior fellow at the right-leaning Heritage Foundation think tank who worked at DHS during the Trump and Bush administrations.

“Even if the administration does go through the rulemaking and public comment process, which it blatantly ignored under the Obama administration, it’s still Congress’s job to authorize such immigration,” she said. “To say, ‘OK, OK, we’ll go back now’ and do it in a rule addresses one half of their violations.”

DACA represents a key test for Sunstein and other DHS officials, who are likely “poring over” Friday’s ruling for guidance on how to craft a regulation that will pass muster—if not with the district court judge, than with the U.S. Court of Appeals for the Fifth Circuit and the U.S. Supreme Court, said Theresa Cardinal Brown, managing director of immigration and cross-border policy for the Bipartisan Policy Center.

“That’s exactly what Cass Sunstein and the lawyers at DHS and DOJ are going to want to go through with a fine-toothed comb,” she said.

Somin of George Mason said the Biden administration could make DACA more durable in court by trying to preserve the non-deportation commitment and work permits available under the policy—while removing an element of the policy that gives recipients “lawful presence” status in the U.S.

DHS expects to release its proposed rule “in the near future,” Biden said in a statement Saturday.

Charging ahead on the regulatory process, notwithstanding Hanen’s narrow interpretation of DHS’s authority, seems like a wise choice for DHS, said immigration lawyer Greg Siskind, a founding partner of the firm Siskind Susser PC.

“A regulation will give it a much better chance,” he said. “They’re going to be given a lot more leeway, the administration, if they’ve gone through the rulemaking process.”

Rulemaking would also give the administration a chance to fix certain aspects of DACA, said Jeremy McKinney, president-elect of the American Immigration Lawyers Association, a national group of attorneys and law professors.

“Our clients are having to demonstrate continuous physical presence in the United States since June 2007,” he said. “Rulemaking itself would provide an opportunity to refresh that.”

To some agency watchers, it all comes back to Congress. Even if lawmakers can’t advance legislation to protect Dreamers, they should at least swiftly confirm Biden’s nominees to top positions that oversee immigration issues, said Tom Warrick, a senior fellow at the Atlantic Council, a nonpartisan international affairs group.

“This instance highlights again the importance of Senate-confirmed leadership to make sure that politically accountable senior officials are making the decisions,” Warrick, a former DHS official, said.

Ur Jaddou, the president’s pick to lead U.S. Citizenship and Immigration Services, which processes DACA applications, is one of several DHS nominations awaiting final votes in the Senate. Sen. (R-Okla.) last week announced he was using a procedural maneuver to slow the confirmation process for DHS nominees.