Five months into the Biden administration, changes are beginning to emerge in how the federal government’s occupational safety agency is enforcing its Covid-19 worker-protection mandates.

The Occupational Safety and Health Administration has issued more than three times as many violations of the general duty clause, a provision of federal law, than it did during the Trump administration, according to a Bloomberg Law review of OSHA enforcement data. OSHA also has increased the number of inspections of workplaces where Covid-19 could be a hazard, even if an employer or workers haven’t reported complaints to the agency.

The trends mean that employers with no recent Covid-19 worker hospitalizations or deaths could still be inspected if they’re in an industry where infections pose a problem. At the same time, rising vaccine rates also could allow the agency to focus more on other types of workplace hazards.

Under the Biden administration, OSHA has issued 11 general duty clause citations, compared with three during the Trump administration, which was roundly criticized by union leaders and worker-safety advocates for its business-friendly approach to virus enforcement.

The general duty clause, part of the Occupational Safety and Health Act, requires employers to provide a workplace free of known deadly hazards that can be feasibly mitigated. The Trump administration pointed to the clause to justify not issuing an emergency rule specific to Covid-19.

The three employers the Trump administration cited were all meatpacking plants, and in each case it proposed a $13,494 fine, the maximum penalty for an alleged serious violation.

President ‘s OSHA, which June 10 released an emergency rule limited to health-care employers, has used the general duty clause against several types of workplaces, from a mobile phone repair shop to a medical clinic. It twice has alleged willful violations, which carry a maximum fine of $136,532.

While use of the general duty clause provides the clearest difference between the Trump and Biden administrations’ approaches to workplace safety enforcement during the pandemic, some aspects didn’t change. Under Trump, the average proposed fine from a Covid-19 inspection was $13,046, while under Biden it has averaged $13,232. 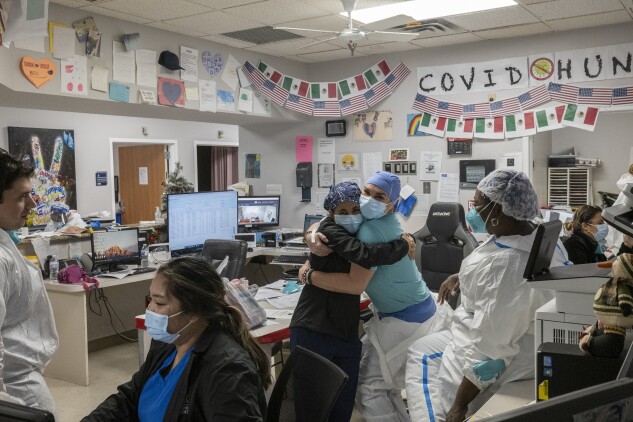 OSHA conducted 2,370 Covid-19 inspections between the start of the pandemic and June 13, agency data showed. Of those, 1,531 began while Trump was president and 839 were under Biden.

As of June 3, the latest date for which citation records were available, OSHA had issued citations following 485 virus-related inspections. Of those, 279 were brought during the Trump presidency, and 206 since the Biden administration’s first full day, Jan 21.

Most of the citations issued under Biden stemmed from inspections that began during the Trump administration. Following the start of an inspection, OSHA has up to six months to issue a citation.

John Ho, co-chair of Cozen O’Connor’s workplace safety practice in New York City, said that once OSHA’s Covid-19 emergency temporary standard for health care takes effect it will lead to a new set of citations, because hospitals and other providers will be expected to comply with the standard’s specific requirements rather than follow OSHA guidance.

“Now you have a specific emergency standard. Sometimes there are gray areas, but for the most part, now you have a standard and it’s easier for OSHA to say, ‘You did not do X, Y, and Z,’” Ho said.

The agency declined a request to discuss enforcement trends. Its Covid-19 health-care standard is slated to publish Monday in the Federal Register and take effect immediately.

Richard Fairfax, who was OSHA’s career-service deputy assistant secretary until retiring in 2013, said he expects the agency’s Covid-19 national emphasis program will result in a growing number of inspections based on the initiative’s goal of targeting workplaces where workers could be at greatest risk of infection.

OSHA had conducted 541 inspections under the emphasis program since it took effect March 12 through June 13. The program’s directive calls for about 5% of OSHA’s annual inspections to cover Covid-19 hazards. That would amount to about 1,550 inspections out of the 31,013 total OSHA projected for fiscal 2021.

As vaccination rates continue to rise, it’s likely there will be fewer inspections prompted by worker deaths or hospitalizations, according to Fairfax, now a consultant with the National Safety Council, and Ho.

“I don’t really expect you’re going to see much more aggressive enforcement of Covid here, because I don’t think there is as much of a concern,” Ho said. “The CDC is relaxing requirements. OSHA guidance recognizes the benefits of vaccines.”

The cases where OSHA alleged willful violations of the general duty clause involved a Massachusetts tax preparation business, where employees were reportedly not allowed to wear masks, and a Rhode Island medical clinic, where a doctor allegedly infected with Covid-19 continued to practice, passing the virus to co-workers.

Melissa Bailey, a partner with Ogletree Deakins in Washington, D.C., said two factors could have led to the increase in general duty clause citations under Biden.

OSHA issued revised Covid-19 compliance guidance on Jan. 29, which the Biden administration considered to be stronger than prior guidance, Bailey said. Not following the new directions could have meant an employer was more likely to get a general duty clause citation, Bailey said.

The agency also limited in-person inspections for several months last year to protect inspectors, and it would have had a hard time proving a general duty clause case when inspections were conducted remotely, Bailey said.

A Department of Labor spokesperson said OSHA under Biden hadn’t issued new guidance to inspectors on what qualifies as a Covid-19 general duty clause violation.

The violation cited most often in virus-related inspections under both administrations was for not following requirements for respiratory protection—1,067 alleged violations as of June 3.

Failing to adhere to rules for recording Covid-19 cases and for not notifying OSHA of deaths and hospitalizations by a specified time led to 249 alleged violations.

Since the start of the pandemic, businesses in New York and New Jersey have had the most OSHA citations, accounting for 194 cases—or 40% of all OSHA virus inspections where violations were alleged. Other states with high citation numbers were Ohio, 49; Illinois, 37; and Massachusetts, 34.

Ho said that as Covid-19 cases decline, OSHA will turn its attention back to looking for construction- and manufacturing-related violations.

If Congress backs recommendations in the administration’s fiscal 2022 budget request—which is far from certain—OSHA’s enforcement staff would grow to 1,545 positions in 2022, a 15% increase.

“Once the funding comes through, you’re going to see a much more likelihood of OSHA being aggressive,” Ho said, referring to OSHA shifting its focus away from Covid-19.