David Weil, the Obama administration’s top wage regulator who has supported government crackdowns on the workforce models of and other gig-economy companies, is in line to become the White House’s nominee for his former post at the U.S. Labor Department, according to multiple sources familiar with the process.

U.S. Labor Secretary wants Weil to return to the role of Wage and Hour Division administrator, and the planned nomination depends on him clearing the administration’s check of his background and supporting paperwork, said the sources, who spoke on condition of anonymity. It wasn’t clear when the White House would announce President ‘s intent to nominate Weil.

If Weil is nominated and confirmed by the Senate, he would assume a central role in one of the most legally complex and pressing employment questions facing the Biden administration: How to approach the gig economy’s booming workforce? Digital platform companies, including Instacart and DoorDash Inc. as well as Uber and , consider their workers as independent contractors rather than employees. The classification means that as non-employees, the workers are exempt from wage, safety, and other workplace protection laws.

Media representatives for the White House didn’t comment, and a spokesperson for the DOL didn’t immediately respond to a request for comment. Weil didn’t comment when asked about his planned nomination.

Biden has supported legislation that would require many gig companies to convert their contractors to employees under federal labor law, though it faces long odds of winning Senate approval. Walsh has expressed interest in the gig-worker classification question since taking office in late March, but he hasn’t taken a public stance on an issue that has economic ramifications far beyond digital platform businesses.

As Obama’s WHD administrator from 2014-2017, Weil was the nation’s chief enforcer of federal minimum wage and overtime pay laws. He interpreted those statutes to extend broadly applicable employment protections, a philosophy that would ensure concerted opposition from the business lobby if he is nominated.

A hallmark of his tenure was spearheading investigations of companies’ use of independent contractors. The probes often led the department to accuse businesses in low-wage sectors, such as trucking and janitorial services, of improperly classifying their workers. The department would argue in litigation that the workers were employees under the Fair Labor Standards Act and the employer therefore owed them back pay.

Weil entered the Obama administration with a background as a leading labor economics professor and researcher. He also had significant influence during his tenure by focusing on improving conditions for vulnerable workers employed in “fissured” workplaces, a term he popularized. Critics say that in these arrangements—common in hospitality, fast food, and retail—corporations suppress wages by shifting responsibilities to affiliated companies, such as franchisees, lower down the chain.

Weil’s approach as Obama’s wage-hour leader drew acclaim from unions and the plaintiff’s bar, but spurred clashes with businesses groups over what they viewed as his aggressive, punitive enforcement actions.

Weil is now dean and professor at Brandeis University’s Heller School for Social Policy and Management. He’s spent the past four-plus years as an increasingly vocal critic of two of the gig economy’s most well known brands: Uber and Lyft.

In 2017, in his final days in the Obama administration, he told Bloomerg News that he personally didn’t ride with Uber because of the company’s refusal to classify its drivers as employees.

In 2019, as gig companies were pushing to be exempted from a new California law that made it harder to consider workers as independent contractors, Weil authored an op-ed in the Los Angeles Times arguing that Uber’s and Lyft’s “status as employers is really quite clear.”

“Through algorithmic systems, Uber and Lyft produce a highly valued brand experience for consumers and investors based on their ability to control and direct drivers who are central to the service they provide,” he wrote.

When the Massachusetts attorney general’s office sued Uber and Lyft last July for allegedly misclassifying drivers, Weil appeared at the state’s virtual press conference in support of the litigation. The companies’ business model, he said that day, “allows businesses really to have their cake and eat it, too.”

“They get all the benefits of the control of a workforce and management of a workforce, but they sidestep their responsibility to those workers under our state law here in Massachusetts, as well as federal law,” Weil added.

Under Biden, the WHD has already moved to revoke a Trump-era rule that would’ve made it easier for gig companies to continue tagging workers as independent contractors. But the administration’s policy on whether to replace that regulation with a new interpretation of employee-versus-contractor questions would be determined in large part by the division’s next leader. 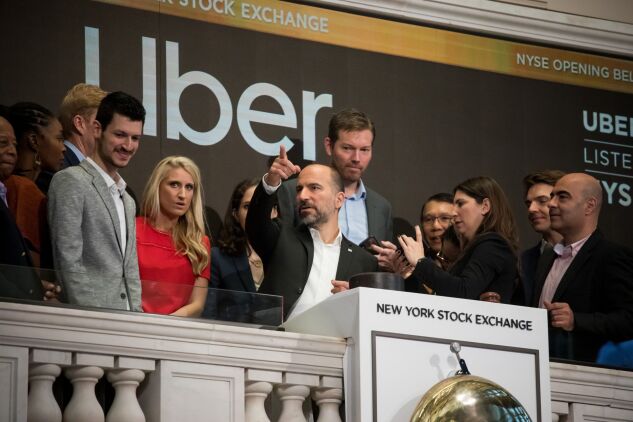 Dara Khosrowshahi, CEO of Uber Technologies Inc. (center), rings the opening bell during the company’s initial public offering on the floor of the New York Stock Exchange in May 2019.
Photographer: Michael Nagle/Bloomberg

Uber and Lyft, which deploy an aggressive, well-financed lobbying attack to preserve their independent contractor model, have potential allies in the White House. Tony West, the brother-in-law of Vice President , is Uber’s chief legal officer.

Biden’s National Security Adviser, Jake Sullivan, once consulted for Uber in the company’s bid to strike a deal with California unions that would’ve prevented drivers from being classified as employees.

And Seth Harris, Biden’s deputy assistant for labor and the economy, co-authored a 2015 paper that proposed the creation of a new intermediate category of workplace protections for gig workers. In that concept, workers would receive some employment protections, such as anti-discrimination rights, but not others, such as the guarantee of a minimum wage.

Lyft cited that paper in a November press release celebrating passage of California’s Proposition 22, a ballot measure bankrolled by gig-economy powers that designated workers at app-based rideshare and delivery companies as contractors, while providing them with a limited set of alternative benefits.

Since the 2020 election, Weil has continued to criticize gig companies’ efforts to secure deals that would provide workers with some form of representation and benefits without making them employees.

“I find it a troubling way to set public policies, by allowing powerful companies to decide what part of our historic protections they will adopt and which ones they will decide are not in their interest,” Weil said in an interview earlier this year.