Barstool Sports founder David Portnoy looks on prior to a National Football League game in Foxboro, Mass., in 2017. An unfair labor practice charge was filed against Barstool Sports after Portnoy tweeted that he would fire any employees who contacted a union attorney.
Photographer: Adam Glanzman/Getty Images

The founder of bombastic sports website Barstool Sports is the latest boss to potentially face an unfair labor practice complaint for an anti-union tweetstorm threatening workers who talk to union attorneys.

In a series of Aug. 13 tweets, Barstool’s Dave Portnoy threatened to fire and sue employees that reached out to union lawyers. The tweets followed an Aug. 12 blogpost where he dared his employees to attempt to form a union, so that he can “smash their little union to smithereens.”

Within roughly three hours, the AFL-CIO tweeted that it had filed an unfair labor practice charge with the National Labor Relations Board, alleging Portnoy’s tweets violated federal law’s prohibitions against threatening workers’ concerted activity to seek labor rights. That tweet was later deleted. The union said it hasn’t filed a complaint yet but would assist Barstool employees looking to file a complaint.

From there the issue took off, trending on Twitter and landing Portnoy a chastising from the social media-adept Rep. (D-NY). “If you’re a boss tweeting firing threats to employees trying to unionize, you are likely breaking the law &can be sued,in your words, ‘on the spot,’” she tweeted to Portnoy.

“I’ve seen this before, but not in this stupid of a manner,” said David Rosenfeld, an attorney with Weinberg Roger & Rosenfeld. “I think he’s following in Elon Musk’s stride.”

Musk got in hot water in 2018 when he tweeted that Tesla employees could lose their stock options if they unionized. 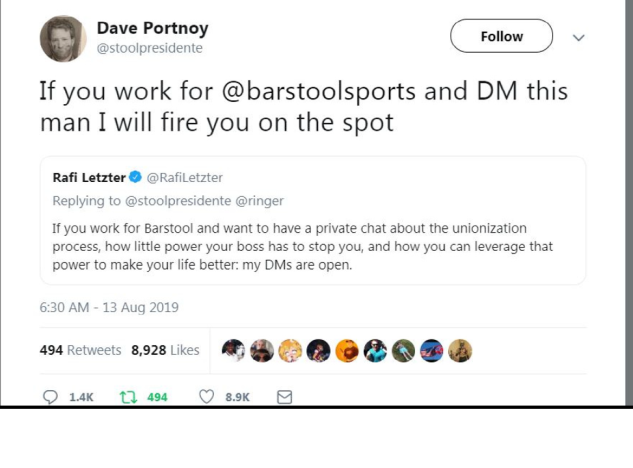 The Barstool tiff comes during turbulent times for online media company unionization efforts. Employees at Barstool competitor The Ringer announced Aug. 12 that they were seeking to unionize. That follows high-profile unionizing efforts at Vox and Buzzfeed in recent years.

If found in violation of the law, Portnoy could receive a cease and desist order and would have to post a notice to all employees, including where the original comment went out, Rosenfeld said.

Barstool is based in New York City. The New York State Department of Labor added to the Barstool tweetstorm Aug. 13.

“It is illegal to take any unfavorable action – including termination – against employees for union-related activities under the National Labor Relations Act. New York is a proud union state. We say no way, no how to intimidation, threats and union busting,” the agency tweeted.

Instead of apologizing, Portnoy doubled down, tweeting, “If all the people in my mentions would spend more time working and less time tweeting you would be rich and powerful like me and wouldn’t need your blogging unions to protect you.”

Portnoy’s statements could be considered “explicit threats” that are “clearly illegal under the labor law,” said Wilma Liebman, who chaired the National Labor Relations Board under President Barack Obama.

Barstool Sports readers and listeners came to Portnoy’s defense on Twitter, saying that Portnoy was merely trying to be a “troll” and wasn’t responding to a serious effort to unionize the Barstool employees.

Federal law allows managers and other agents of a company to criticize unions, but restricts them from threatening to punish employees who organize. “As an employer, you can hate unions, denigrate unions, oppose unions,” said University of Wyoming law professor Michael Duff, a former NLRB attorney. “But you may not, in reaction to real or imagined concerted employee activity, make statements containing threats of reprisal” like Portnoy’s.

“Under any reading of the federal labor law, telling workers that they’re going to be fired if they seek advice or help about a unionization campaign is flatly illegal,” said Harvard law professor Ben Sachs. “In my estimation, even the Trump NLRB would consider that illegal.”