Federal contractors no longer can inquire about an applicant’s criminal history before extending a conditional job offer to work on a government contract, a new prohibition that stems from a Trump-era defense policy law.

The restriction, tucked into the National Defense Authorization Act for Fiscal 2020, took effect Dec. 20, and a proposed rule that could guide compliance is expected to be released in coming days.

Attorneys who represent companies that do business with the federal government said the “ban the box” law won’t require major changes for many contractors because they already navigate a patchwork of similar state laws across the U.S.

“It’s just a lot easier, from an administrative standpoint, to go ahead and make that standard practice,” said Olaoluwaposi Oshinowo, special counsel with Wiley Rein LLP. “There shouldn’t be a heavy lift for most federal contractors to comply here.”

At least 16 states bar most employers from requiring job applicants to disclose a criminal record before a job offer has been extended, with some carveouts, according to a review of Bloomberg Law data. Many localities do the same. Several other states have similar laws on the books, and others prohibit inquiries about sealed or expunged criminal records.

Yet in the absence of a regulation covering compliance questions, federal contractors still face uncertainty about how and when the law will be enforced and exactly which kinds of job openings could be exempt.

A draft report reflecting a proposed rule to amend the Federal Acquisition Regulation is slated for release by Jan. 5, according to an online listing and a spokesperson for the U.S. General Services Administration. The proposal will be subject to public comment and followed by a final rule, the spokesperson said.

Federal contractors employ about 25% of the country’s workforce, though many are likely already subject to some form of a “ban the box” law on the state or local level and won’t view the federal statute as a new development, said Lisa Lupion, a partner with Orrick Herrington & Sutcliffe LLP. 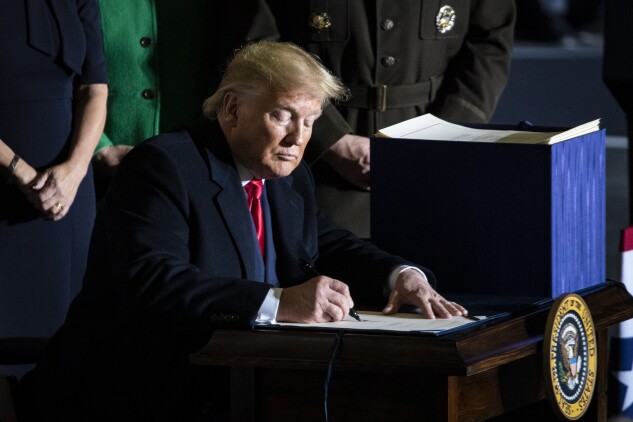 Banning employers from making pre-offer inquiries about an applicant’s criminal record—sometimes referred to as including “a box” on an employment questionnaire—protects formerly incarcerated individuals from being weeded out early in the pre-employment process, before they’ve had a chance to prove themselves, Lupion said.

“‘Ban the box’ laws certainly have the effect of making a path for people who otherwise wouldn’t have thought they had access to a certain classification of jobs,” Oshinowo said. They give workers with criminal histories the opportunity to “at least get into the room so they can show you who they are and what they’re about.”

The new federal restriction for government contractors doesn’t preclude criminal history inquiries during all stages of the hiring process. For example, an employer could ask the question after a conditional offer has been extended to the worker, according to the legislative language.

If an applicant reveals an arrest or conviction, guidance issued by the U.S. Equal Employment Opportunity Commission in 2012 advises employers on how to proceed, keeping in mind the potential that excluding an applicant because of past criminal conduct could result in a claim of unintentional bias.

While state and local “ban the box” laws are common for contractors, many companies that bid for federal projects may not be aware that the new law took effect in December, said Craig Leen, a partner with K&L Gates LLP.

“It’s just a provision that’s been included in a bigger act that was focused on something else,” said Leen, the Trump-era head of the U.S. Department of Labor’s Office of Federal Contract Compliance Programs, which enforces anti-bias laws and affirmative action obligations for federal contractors.

The myriad state laws that apply to companies bidding on government work could be simplified for contractors if a federal standard applies to all employers, Leen said, though it would have to preempt state and local guidance to provide additional clarity.

The only other federal direction contractors have in this area, aside from the EEOC guidance, are recommendations from the Labor Department’s contractor compliance agency. That document advised that, due to racial and ethnic disparities reflected in incarceration rates, “contractors should be mindful of federal antidiscrimination laws if they choose to rely on job applicants’ criminal history records for purposes of employment decisions.”

“Hiring policies and practices that exclude workers with criminal records may run afoul of such laws, which prohibit intentional discrimination on the basis of race, national origin, or other protected bases, and policies or practices that have a disparate impact on these protected groups and cannot be justified as job related and consistent with business necessity,” the agency’s 2013 directive stated.

Leen said he advises companies to avoid inquiring about criminal histories as a general best practice, “no matter the law.”

Lupion, however, said contractors’ familiarity with these laws makes the patchwork manageable.

“It’s not as miserable for a multi-state employer to navigate this one,” she said.