US President Joe Biden speaks during a tour of the Ford Rouge Electric Vehicle Center, in Dearborn, Michigan on May 18, 2021.
Photographer: Nicholas Kamm/AFP via Getty Images

The shift to electric vehicles is threatening labor unions’ ironclad grip on the U.S. auto industry, thanks in part to an obscure portion of federal labor law that gives car manufacturers authority to swap union workers for non-union workers.

President last week hailed the arrival of Ford’s electric F-150, saying at an appearance in Michigan he would create jobs by moving key elements of production to U.S. soil. But even if his administration succeeds, there’s no guarantee those jobs will be the same high-paying union jobs he seeks—a potential threat to the United Auto Workers, already battling the outsourcing of manufacturing jobs overseas and a long-running corruption scandal.

One-quarter of auto assembly workers could be displaced if U.S. consumers embrace electric cars, according to the Congressional Research Service, given that electric models are simpler to put together than their gas-guzzling predecessors. Federal precedent surrounding union “successorship,” or when a new employer is required to bargain with an existing union, makes it legal—and easy—for companies to replace portions of their old union workforces with cheaper non-union labor to manufacture new electric vehicle components such as batteries and charging stations.

Typically, if an employer buys a company that’s already unionized, they’re legally required to recognize and bargain with that union. The obligation depends on whether the employer substantially retains the identity of the original business—the more it does, the more it’s required to recognize the union, the Supreme Court said in its 1972 decision NLRB v. Burns International Security Services. The National Labor Relations Board has addressed narrower questions surrounding successorship in the years since.

Successorship doesn’t apply in cases where the employer reorganizes as an entirely new entity—precisely what and are doing to make electric vehicle batteries through partnerships with other companies. So far, neither company has said they’ll recognize the UAW in the new battery plants, which will be operated through joint agreements with different Korean companies.

“That’s why it’s really uncertain at this time—that it’s not a given that they’ll be automatically union jobs,” said Marick Masters, a business professor at Wayne State University in Detroit who studies collective bargaining in the auto industry. “The union is going to have to fight for those jobs and make certain they can work out the best deal possible with the company, that at least the company will remain neutral during an organizing campaign.” 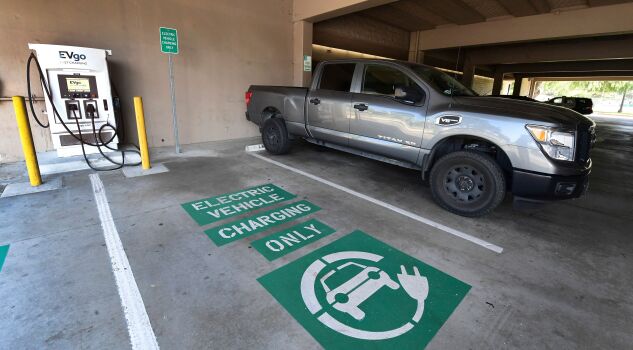 A space remains open for an electric vehicle at a EV charging station in Monterey Park, Calif.
Photo by FREDERIC J. BROWN/AFP via Getty Images

The UAW could try to convince auto companies to agree, through collective bargaining, to recognize unions at jointly owned battery plants through “card check” recognition, said Wilma Liebman, a former Democratic chair of the NLRB.

In the informal card-check process, a union is recognized if a majority of workers sign cards indicating their support. It’s seen as more advantageous to organized labor than a formal election overseen by the NLRB, which can be a drawn-out process requiring the union to counter the company’s public relations power.

“There’s a way that the UAW, in negotiations with the Big Three, can try to negotiate protections for these people,” Liebman said, referring to Ford, GM, and .

Automakers could remain neutral in potential organizing campaigns. While beneficial to the union, this would still require the UAW to take on the expensive and time-consuming task of organizing new workplaces. The companies also could support the unionization efforts if they decide they have more to lose by damaging their relationship with the UAW.

“How this is done and the role the company plays is going to be critical, and there’s a lot of contention about that,” said Harley Shaiken, a professor at the University of California-Berkeley who studies manufacturing unions.

In statements to Bloomberg Law, Ford and GM wouldn’t comment on the possibility of card-check elections at new battery plants.

Ford last week announced it would open two battery plants in a joint venture with the Korean company , prompting the UAW to call for the preservation of union jobs. Senior UAW workers can make upwards of $30 an hour, significantly more than workers at most battery plants.

“UAW members believe that Ford has a moral obligation, regardless of any joint venture arrangement, to ensure that the battery jobs that replace gas engine and transmission jobs are the same good paying union jobs that have fueled this American economy for generations,” Gerald Kariem, the UAW’s Ford liaison, said in a statement.

Ford has remained vague about its position on unions in electric vehicle operations.

“While it’s too early to discuss specific job details, our plan is to work with our labor partners and government leaders to ensure we can deliver both good paying jobs and the competitiveness necessary to continue to invest in this growing space,” Ford spokeswoman Kelli Felker said in an email.

GM is building two battery plants, one in Springhill, Tenn., that’s set to open in 2023, and one in Lordstown, Ohio, scheduled to open next year.

The Lordstown site, operated jointly with , will be watched closely, given that GM shuttered an assembly plant there in 2019 due to declining demand for the small sedans the facility had manufactured.

All of the Lordstown workers were offered transfers to other GM plants, gutting a UAW local chapter once considered one of the most militant in the country. The plant is now home to Lordstown Motors, an electric vehicle company unaffiliated with GM that uses non-union labor. Lordstown Motors this week walked back production goals for its electric pickup truck, citing financial complications.

There’s no indication that a union will return to the Lordstown site in the near term. GM spokesman Daniel Flores in an email declined to say whether management would accept an informal “card check” election to re-organize the facility, saying only that the company “respect[s] workers’ right to unionize and the efforts of the UAW to organize battery cell manufacturing workers in Ohio and Tennessee at our joint venture sites.”

“When fully operational, these American battery facilities will employ more than 2,300 workers,” Flores added. “We believe the UAW, given their historic and constructive relationship in the automotive industry, would be well positioned to represent the workforce.”

“I don’t think GM really wants it to be a union plant, to be honest with you,” Tim O’Hara, former president of UAW Local 1112 in Lordstown, said in an interview. “They’re going to have to go through the traditional organizing and then the vote. And I guess the question is, like, how hard is Lordstown Motors or GM going to fight?”