States and some cities are passing laws requiring employers to automatically enroll workers in retirement savings plans due to the lack of a federal mandate.
Photo by Ron Antonelli/Bloomberg

New York City has become the latest jurisdiction to pass a law requiring employers to automatically enroll workers in retirement savings accounts, part of a growing number of states and municipalities to enact the rules in lieu of a federal mandate despite criticism from business groups.

The city’s automatic-individual retirement account program passed last week was modeled after systems operating in California, Illinois, and Oregon. Now, five other states and two cities are in the process of setting up nearly identical mandatory programs that automatically enroll all private-sector workers into government-managed long-term savings accounts.

Nearly half of the American workforce lacks access to employer-sponsored retirement savings, according to the Center for Retirement Initiatives at Georgetown University.

But industry groups such as the U.S. Chamber of Commerce have warned the proliferation of auto-IRA mandates will lead to an “administrative quagmire” for large, cross-state employers facing varying state rules on eligibility and compliance.

The auto-IRA programs are a piecemeal approach to closing that U.S. retirement savings gap, said Angela Antonelli, executive director of the center at Georgetown.

New York City’s law affirms an emerging auto-IRA model rooted in standardization rather than a disjointed patchwork of unlike plans, and jurisdictions are building that uniform network in the absence of a federal mandate for universal retirement coverage, Antonelli said.

“We’re seeing more states taking action and we’re seeing the programs looking similar over time,” she said. “Why is that happening? It’s because what we have seen so far with Oregon, Illinois, and California is success, and success breeds more success.” 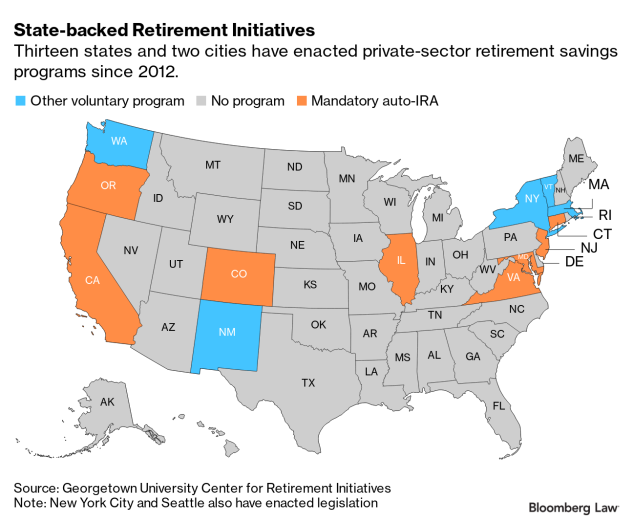 Where there is discord between plans, states are actively joining ranks.

The Illinois General Assembly is considering a bipartisan amendment to its Secure Choice Retirement Savings Program that would activate automatic escalation in line with similar provisions in California and Oregon. The amendment would also apply the law to all businesses in the state, striking a carve out that exempted those with fewer than 25 employees. The state house OK’d the bill 106-2 last week, and it now awaits a third reading in the senate.

State auto-IRAs mirror each other partially because they’re designed to fill a void left by the absence of a federally mandated program promising universal coverage, said Laura Quinby, a senior research economist at the Center for Retirement Research at Boston College.

The Obama administration invested its political capital into health care instead of retirement coverage, and President is tackling expanded access among workers who already have the opportunity to save through universal automatic enrollment instead.

“The parameters were set with a set of objectives in mind,” Quinby said. “They’re achieving that. Plus, I think they did want to make it so that employers across state boundaries wouldn’t have to comply with enormously different program rules.”

The center’s research is confirming what policy experts had predicted about the programs’ success, she added. An additional $225.8 million in long-term assets has been added to the investment market covering an additional 330,000 workers. Opt-out rates hover relatively low around 30%, and short-term withdrawals average $1,000.

Not all auto-IRA programs are alike. Differences persist even among the three programs that are already in operation.

While Oregon and Illinois may soon cover all employees, CalSavers in California exempts businesses with fewer than five employees. Fee caps range from 0.75% of total assets in Illinois to 1.05% under the OregonSaves program.

Auto-IRAs set to take effect as early as this year in Colorado, Connecticut, and Maryland also vary according to the number of employees affected, default contribution rates, and fees. Although AARP research has shown that employees are 15 times more likely to save when they’re automatically enrolled, New Mexico, New York, and Washington have all passed voluntary or hybrid plans.

Even advocates say state-backed programs may not be ideal for all employers. Anecdotal evidence has shown that, when faced with a state mandate, many once leery employers are biting the bullet and opting for traditional 401(k)s that come with tax advantages and allow businesses to incentivize worker savings.

“If the private sector is able to innovate and offer products that are attractive to small businesses, then that’s great, because the goal is getting people covered—not a debate about who’s doing it,” Antonelli said.

Barry Mione, CEO of SaveDay Inc., is doing just that. He co-founded an online brokerage firm called DLJDirect in the late ‘90s that went on to become E-Trade Financial Corp., part of the largest stock brokerage in the world. Moving trades online and eliminating costly brokerage fees democratized trading and prepared it for the 21st century, he said.

“The retirement industry is stuck in the 1980s, too,” he said. “Plans are too expensive, too complex and now sponsors are being called to the carpet for excessive fees. I wanted to change that.”

State-backed programs aren’t for everyone, Mione said, and neither are low-cost 401(k)s. But he said he sees an opportunity for growth as the industry continues to change.