Nearly a third of employers who previously required Covid shots have dropped or plan to drop the requirement, according to a forthcoming survey.

Yet as virus rates appear to ebb and companies loosen rules, often in an effort to attract new hires in a tight labor market, they could be alienating employees who dutifully got their shots. Covid-cautious workers and customers as well may take umbrage at the idea of sharing space with the unvaccinated, complicating the return-to-office push.

Companies and municipalities already are facing an angry backlash from workers who were fired or placed on leave for refusing to get vaccinated. New exemptions for athletes and performers from New York City’s job-or-jab mandate have come under fire from workers and private-sector employees who still must comply with the requirements announced late last year.

“So you have athletes, entertainers, you have crowded, sold-out concerts, people vaccinated, not vaccinated, all together. And then little old me in a patrol car, I’m a threat to everybody?” said Cely Decolongon, a New York Police Department sergeant who remains unvaccinated and is seeking religious and medical exemptions. “I don’t get it. That makes no sense.”

Virginia Alleyne, a longtime waitress at Yankee Stadium’s Legends Club who was fired last fall for refusing the shots, described New York City’s exemptions as “hypocritical” in a recent lawsuit against the city and Mayor .

Alarmed health experts also fret that hiring the unvaccinated could lead to outbreaks in the workplace -- not to mention trigger another virus wave.

“Rolling back mandates seems to imply that the pandemic threat is somehow over when it’s not,” said , a former Obama administration health official who’s now a Harvard professor. “And it sends the message that the pandemic is behind us, when the next wave could be right around the corner.”

Only about 38% of employers currently require Covid-19 shots. Of those, 5% said they expect to rescind the policy this year, a forthcoming Willis Towers Watson survey found.

Another 10% of those surveyed said they previously required the shots but have since discontinued the policy. The survey reached about 600 employers representing about 10 million workers. 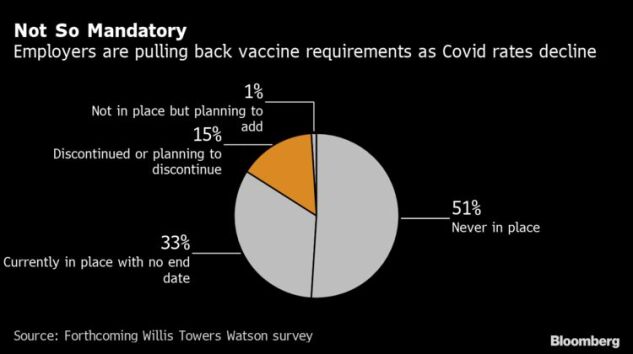 Like New York City, some companies are keeping mandates in place while relaxing certain terms. , for example, is now about 2,000 workers with exemptions to return to customer-facing roles.

The Centers for Disease Control and Prevention Wednesday that it would extend to May 3 a rule requiring masks on planes and trains while it evaluates the latest uptick in infections. Airlines have been pushing the administration to end the mask rule, which they argue puts their staff in an uncomfortable enforcement role, even as experts say it has helped keep workers safe.

The pullback on virus measures comes as Covid-related risks appear low and Americans are increasingly fed up with pandemic restrictions.

New Covid cases in the month to April 10 are about 95% lower than in January, when the omicron wave peaked. On average, about 31,000 new virus cases were diagnosed each day this month, according to data compiled by Bloomberg. Covid patients have also emptied out of hospitals since early this year.

About 27% of U.S. adults now report essentially having returned to normal activities, while 42% reported a partial return and only 17% said they were still doing few pre-pandemic activities, a recent survey found. (The remaining 14% said that Covid hadn’t changed their activities.)

“Many people, maybe even most people, are absolutely done with Covid and feel that it’s over,” said Jeff Levin-Scherz, a managing director at Willis Towers Watson.

Whether Covid is actually over remains to be seen. Another serious virus outbreak could still occur, public-health experts warn, especially as economic activity is rebounding with only about 66% of the U.S. population fully vaccinated and potential for further virus variants to emerge.

On Wednesday, New York’s health department said two new omicron subvariants that appear even more transmissible than the highly contagious BA.2 are driving an uptick in Covid cases in the state.

And even when rates appear relatively low, risks still exist, especially for elderly and immunocompromised individuals.

“Everyone wants to put the pandemic behind us,” said Harvard’s Koh. “But the only way we’re going to do this with any certainty is to have the highest vaccination rates possible.”

At the same time, employers are anxious for a return to business as usual. They’re also hiring at a time of “extraordinary flux in the labor market,” said , a senior economics adviser at Cornell University’s Industrial and Labor Relations School and former commissioner of the U.S. Bureau of Labor Statistics.

Unemployment, labor force participation and immigration are all at low levels, while Americans are leaving their jobs at the in 20 years.

These factors all add up to a competitive market for new employees, and particularly for entry-level, lower-wage positions, Groshen said. Vaccination rates are also lower among younger, less educated Americans, survey data shows-- exactly the types of workers likely to be in the running for these jobs.

That might help explain why some employers -- likely those with high turnover or big new hiring needs -- are pulling back on vaccine mandates.

Fewer new job postings required vaccination in March than in February, according to data provided by LinkedIn. Job listings requiring shots had increased from August of last year through February. 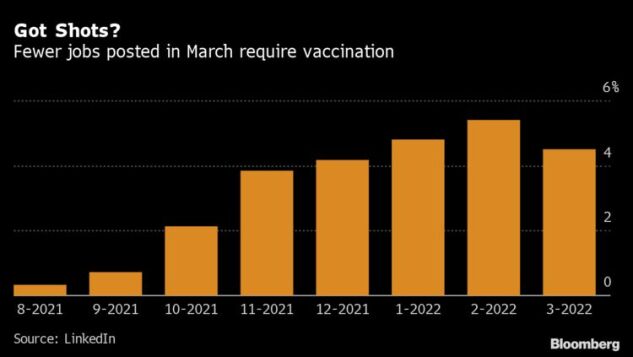 Lifting vaccine requirements could result in higher rates of absenteeism and transmission of the virus, with both health and economic implications, Groshen said. Those dangers may be lower now but are not entirely gone.

Employers could also lose at-risk workers “who felt safe when they knew all their coworkers would be vaccinated, and might feel less safe if they’re not,” she said.

Nowhere has the creation of new vaccine exemptions been quite as high profile -- and polarizing -- as in New York City. When Mayor Adams exempted athletes and performers late last month, he cited low Covid cases and the importance of tourism to the city’s economic recovery.

“Being healthy is not only physically healthy -- it’s economically healthy,” Adams said. He noted that previous rules allowed players from out of town who were unvaccinated to compete, but not local players.

But the move has prompted accusations of unfairness, as city and private employees still must be vaccinated.

Carin Rosado, who worked as a paramedic for the New York City Fire Department for a decade, was fired in February after refusing to get vaccinated. In an interview, she said the new exemptions were the result of “discrimination” and “bias.” She said she was particularly stung after working on the frontlines of the pandemic without adequate protective gear.

“You feel dispensable,” she said. “I had to be there to help the city. And then it turned around and I lost my job.”

U.S. Representative , a Republican who represents Staten Island and part of Brooklyn, echoed the critique in an interview. “It’s a double standard that people are becoming very frustrated about,” Malliotakis said.

More than 1,400 municipal employees who refused to get vaccinated lost their jobs earlier this year, and more are awaiting medical and religious appeals, said , a Republican city councilman who represents a district in Staten Island.

Borelli said he soon planned to offer a resolution with bipartisan backing that will call on the mayor to rehire municipal workers who were fired.

“This wasn’t an issue of equity until the administration decided to make exemptions,” he said. “When it was one rule for everyone, it was easier for folks to digest.”

Borelli also said health officials have yet to explain why an exempt basketball player presents less risk of contagion “than the hot dog salesman in the Barclays Center.” The city’s health department didn’t respond to a request for comment.