An American flag flies with the California State flag next to the Lone Sailor statue on Oct. 24, 2022, in Sausalito, Calif.
Photo by Justin Sullivan/Getty Images

California state courts have handed down worker-friendly rulings far more frequently than federal trial courts on employer bids to arbitrate lawsuits brought under a state law that deputizes workers to sue over employment law violations as a proxy for the state.

The divide is a product of the different ways judges are applying the US Supreme Court’s June decision in Viking River Cruises, Inc. v. Moriana, which said employers can force arbitration of workers’ individual claims under California’s Private Attorneys General Act. The ruling left open whether class-like claims brought on behalf of other aggrieved workers can stay in court.

The justices dismissed Angie Moriana’s representative claims, saying PAGA doesn’t have a mechanism for litigating such claims when the individual who sued must arbitrate their own claim. Yet California courts will have the final say on what happens to representative claims in that situation, as Justice Sonia Sotomayor pointed out in her concurring opinion.

Many courts in the state have refused to follow the Supreme Court majority’s view that they should be dismissed.

“State courts haven’t been subtle about it,” said Karina Sterman, a management-side lawyer at Greenberg Glusker Fields Claman & Machtinger LLP. “They’re thumbing their noses at the Supreme Court quite openly.”

PAGA allows individual workers to sue on behalf of similarly situated people who work for the same employer. Aggrieved workers keep 25% of any penalties collected, with the state collecting the other 75%.

A pending California Supreme Court case, Adolph v. Uber Technologies Inc., could decide once and for all what happens to representative PAGA claims when individual claims are moved to arbitration. And in an unusual move that underscores state court primacy over the issue, a California appeals court is considering whether to revive Moriana’s representative claims against Viking River Cruises.

Moriana alleged that the company violated the California Labor Code’s requirement for timely pay of final wages. She also included a wide array of other code violations allegedly suffered by other workers, including provisions on minimum wage, overtime, meal and rest breaks, and pay statements.

The California Supreme Court could hear oral argument in Adolph before the summer, though the timing is difficult to determine, said Michael Rubin of Altshuler Berzon LLP, who represents the workers in both the Adolph and Viking River cases. The court must rule within 90 days of the argument under a California law restricting how long judges can sit on cases, he said.

In the meantime, workers and companies involved in PAGA litigation must navigate the fractured legal landscape on motions to compel arbitration.

Federal courts mirrored Viking River by sending individual claims to arbitration and dismissing representative claims in eight of 15 decisions, according to a review of cases on Bloomberg Law. 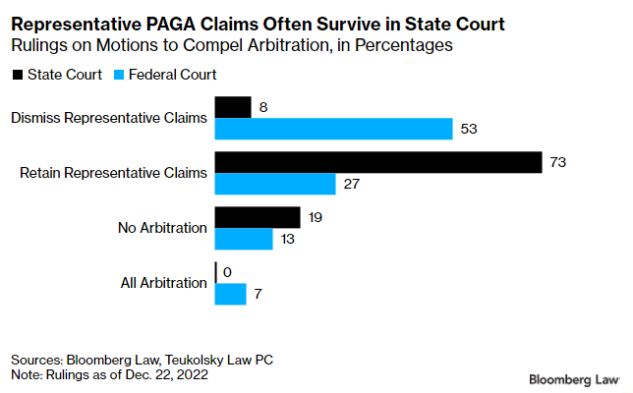 “The trend of state courts not dismissing non-individual PAGA claims is a huge victory for workers in the state of California,” Teukolsky said.

Language from those rulings, such as the October decision in Johnson v. Lowe’s Home Centers, and from Viking River itself could give the California Supreme Court reasons to rule that representative PAGA claims should be dismissed when individual claims go into arbitration, Sager said.

Still, the California high court’s 2020 decision in Kim v. Reins International California, Inc. that allows the litigation of representative claims after the settlement of individual claims seems to set the stage for a similar holding in Adolph, she said.

The disparity in state and federal rulings on motions to compel arbitration of PAGA claims is partly driven by federal judges’ greater deference to the Supreme Court and to the Federal Arbitration Act, the law that calls for enforcement of arbitration agreements, legal observers said.

Federal courts—but not state courts—mandate that plaintiffs have standing under Article III of the US Constitution, which established the judiciary. Federal courts have interpreted that to mean a plaintiff must have suffered an injury caused by the defendant’s action, and that the injury can be redressed by a favorable ruling.

“Even if Article III standing is not being expressly discussed in the federal court opinions, these concerns may be driving some federal judges to dismiss the representative claims,” Szalai said.

The divide in how state and federal courts have handled motions to compel arbitration of PAGA claims adds to the list of reasons that companies generally want to transfer lawsuits from state to federal court, said Amy Schmitz, a law professor at Ohio State University who’s written extensively on arbitration.

Businesses headquartered outside of California can transfer PAGA lawsuits to federal court, as can those facing hybrid complaints that include claims brought under federal law. But California-based companies sued only under state law appear to be out of luck.

Although the penalties associated with PAGA’s class-like representative claims can add up, that doesn’t help employers move them to federal court. The Class Action Fairness Act, which allows defendants to transfer class actions worth more than $5 million in potential damages to federal court, doesn’t apply to PAGA lawsuits, the US Court of Appeals for the Ninth Circuit ruled in 2014.

To contact the editor responsible for this story: at lfrancis@bloomberglaw.com; Rebekah Mintzer at rmintzer@bloombergindustry.com