Customers shop at The Apple Store at the Towson Town Center mall, the first of the company's retail locations in the U.S. where workers voted over the weekend to unionize, on June 20, 2022 in Towson, Maryland.
Photographer: Chip Somodevilla/Getty Images

didn’t use the most potent weapon in the management-side playbook—requiring workers to attend anti-union meetings—in recent organizing efforts in Maryland and Georgia, signaling a shift in strategy as the Biden administration seeks to crack down on the practice.

The results at the two stores couldn’t have been more different. In Atlanta, Apple exerted enough pressure that workers withdrew their election petition. In Towson, Md., the union prevailed by a wide margin in an election June 18.

The efforts unfolded as one of the government’s top labor lawyers, National Labor Relations Board General Counsel Jennifer Abruzzo, seeks to ban anti-union “captive audience” meetings where workers aren’t allowed to leave. Unions have long said these meetings give an unfair advantage to management and are lobbying Congress for legislation to outlaw them.

In both Towson and Atlanta, Apple devoted a portion of its all-staff morning meetings, called “daily downloads,” to make its case against a union. Workers at both stores said in interviews that the topics varied but often centered on claims that workers could lose benefits and pay they already were receiving. Apple hired the management-side law firm Littler Mendelson to thwart the union efforts, but most of the direct communicating was done by Apple managers.

“The devil is in the details,” said a Democrat who served as NLRB chair during the Obama administration. “How voluntary was it? Did they have to go? And if they didn’t have to go, was there something implicit that would indicate a degree of discomfort if they didn’t go?” 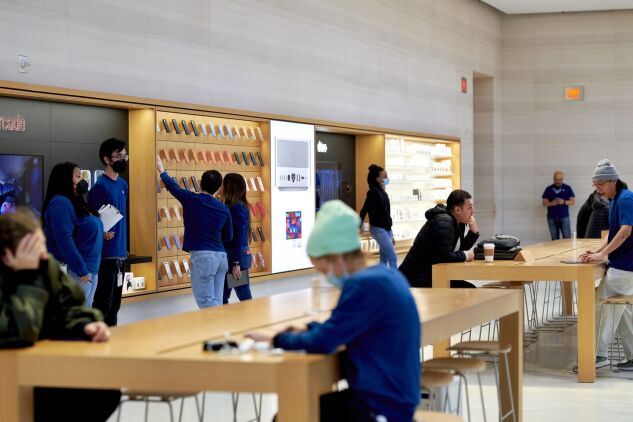 ‘Heads Up’ on Meetings

After pulling their petition, workers at the Atlanta store communicated with their counterparts in Towson to let them know what was coming.

“The things they were talking about in download, it seemed to be coming from a script,” said Eric Brown, a member of the Towson organizing committee. “They would give us kind of some of those things before it started being said in our store, so we kind of had a heads up on some of the directions that they would try to go.”

In both locations, Apple held off-site roundtable discussions for workers to discuss an array of issues, though it became clear they were focused on persuading employees to vote against the union, workers said.

Workers in Atlanta had the option to sign up voluntarily. But some—particularly those seen as being on the fence—would have a block of time appear automatically on their schedule and be told to go to a nearby hotel for a meeting, said Sydney Rhodes, a worker involved in the union effort.

Those workers, many young and impressionable, were never explicitly told that it was optional, she said.

“Nobody was told that this was voluntary,” Rhodes said. “They made it seem as if, you know, if you were scheduled for this and this was booked into your schedule, this was a part of your work, because this is what you’re getting paid for.”

The meetings in Towson were also held in a nearby hotel and later shifted to an empty space in the mall where the Apple store is located. At first, managers highlighted existing benefits to build rapport with workers. The meetings were stocked with cheese plates and Gatorade. But they took on a more aggressive tone as the election neared, Brown said, insinuating that various benefits could vanish under a union contract.

Workers at the Atlanta store ultimately filed unfair labor practice charges with the NLRB over the meetings, giving Abruzzo a potential vehicle to outlaw them. The general counsel told NLRB regional directors in an April memo that captive audience meetings, which have been considered legal under board law since the 1940s, “inherently involve an unlawful threat that employees will be disciplined or suffer other reprisals if the exercise their protected right not to listen to such speech.”

It’s unclear whether Apple’s conduct falls under that definition. The meetings were considered voluntary on paper, and many workers did choose to come. Apple seemed to moderate its approach at the Towson store, making it “absolutely clear” at the start of each meeting that workers didn’t have to stay, Brown said.

But managers at both stores also held one-on-one meetings with workers that blurred the line between voluntary and mandatory. And there’s the question of the daily downloads, which are standard Apple practice but became more and more focused on union issues.

“What would change things is if the employer, in its suggestion, was coercive,” said Pearce, the former NLRB chairman. “I would argue it was still in the nature of the traditional captive audience meeting.”