Millions more Americans filed for unemployment benefits last week, sending the six-week total above 30 million since the coronavirus pandemic began to shutter businesses across the country.

Initial totaled 3.84 million in the week ended April 25 following 4.44 million in the prior week, according to Labor Department figures Thursday. Economists had projected 3.5 million claims. 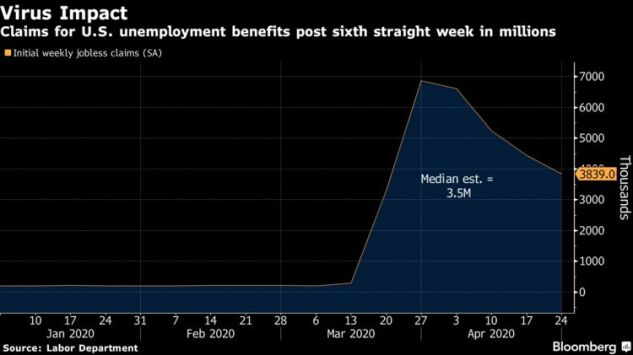 While filings remain at levels unseen before the crisis, it’s the fourth week that the pace has decelerated, suggesting that the worst of the labor-market hit may have already occurred. At the same time, job losses remain far from over and employment is expected to take years to eventually recover. Plus, more layoffs could be in store as states and municipalities face severe budget crunches.

The number of claims, assuming each person is counted as unemployed, could imply a jobless rate of around 22%, which would be the highest since the Great Depression in the 1930s. That’s also far above the peak of 10% reached in 2009 in the wake of the last recession.

Florida -- whose governor plans to the state on Monday -- had the most claims last week, with an estimated 432,500 on an unadjusted basis. That was followed by California at 328,000 and Georgia at 264,800. Most states reported declines.

The latest figures offer a sobering preview of the government’s April jobs report, due next Friday, which is expected to show a 22 million decline in and of 16.3%. Those figures will reflect the period from mid-March through mid-April, when efforts to contain the spread of the virus went into full swing, causing countless layoffs in restaurants, retailers and other businesses.

, or the total number of Americans receiving unemployment benefits, rose by 2.17 million to a record 18 million in the week ended April 18. That sent the insured unemployment rate -- which measures the unemployed receiving benefits as a share of the labor market -- to a record 12.4%, compared with 1.2% before the crisis.

The ongoing demand for unemployment benefits signals that the recession will be difficult to bounce back from. Figures Wednesday gross domestic product contracted in the first quarter by the most since 2008, and the second quarter is widely forecast as a historic decline. Less employment means less consumer spending -- the largest part of the economy -- and more weakness ahead as the drop in demand spreads to other industries. 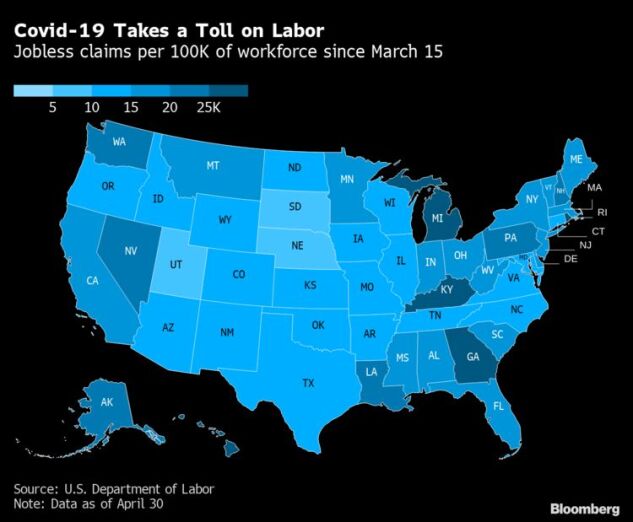 Federal Reserve Chairman Jerome Powell the government to provide more stimulus to support the economy in remarks Wednesday. He also highlighted that the “burdens are falling most heavily on those least able to carry them.” The downturn’s depth and duration are extremely uncertain and will depend on control of the virus as well as government aid, he said.

State unemployment agencies have struggled to cope with the unprecedented surge in applicants since March, and there have been many delays in processing and accounting for the magnitude of the job loss. Some states have staggered applications by name on different days, while others have been working through a backlog.

Separate data Thursday showed , which accounts for about two-thirds of the economy, plunged 7.5% in March from the prior month, the sharpest drop in Commerce Department records back to 1959.