With so many workers idled by health and economic crises, it’s no wonder that stopping work the old-fashioned way—through union walkouts—proved to be an uncommon labor practice in 2020. Still, it’s surprising to see just how drastically strikes went out of style as the pandemic proceeded.

The number of work stoppages didn’t just drop in 2020; it plunged. Only 86 strikes and lockouts were called last year in unionized workplaces, according to Bloomberg Law’s database of work stoppages. That’s almost half the number that was reported in 2019 (159), and the lowest yearly total since Bloomberg Law started tracking such actions in 1990. 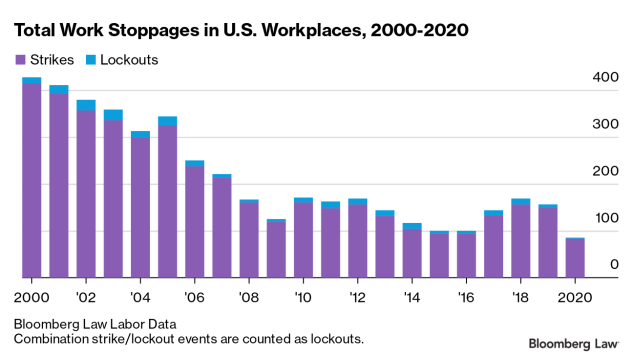 2020 was a quieter year for labor unrest in every industry sector but one: manufacturing. This outlier makes sense, as factories were often among the few types of workplaces that stayed open and operational through the early months of the pandemic—sometimes to the concern of their employees. All in all, last year saw 23 stoppages in manufacturing and 23 in health care, together comprising more than half of all stoppages called in 2020. 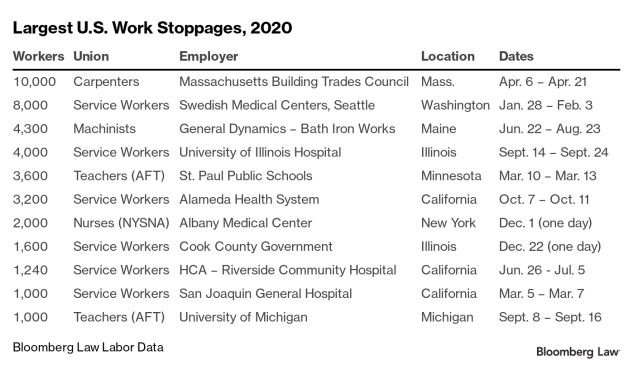 More than ever, if workers were idled in 2020, it was a result of a union’s action rather than an employer’s. Only one of the 86 stoppages that started in 2020 was an employer-initiated lockout, far below the annual average of 8.4 over the past decade. (Two others were combination strike/lockouts.)

As I mentioned previously in assessing the lack of lockouts, there’s no point in barring union workers from the premises when the premises are already closed. The same logic holds true for the low strike count as well: Workers cannot walk off jobs that they no longer have.

For these reasons, 2020’s decline in strikes should be seen more as a statistical anomaly than as a sign of waning labor power.