As of the Oct. 1 effective date of Tennessee’s Pregnant Workers Fairness Act, more than half of the states will require private employers to provide accommodations to pregnant workers. That number could go even higher if states like New Hampshire and Iowa enact accommodation laws already in the works.

But that growing list of states is still just a patchwork of protections, albeit one that’s likely to remain intact even if a recent federal proposal becomes law.

Even though pregnant worker accommodations, like offering light-duty work or providing a chair for a normally standing role, may seem uncontroversial, the Pregnancy Discrimination Act doesn’t explicitly require accommodation, and the 2015 Supreme Court’s decision on the matter stopped short of that mandate.

A bill passed through the U.S. House last week faces an uphill battle to enactment, and relatively broad bipartisan support for such a requirement may have to make way for other priorities in the final weeks before Election Day. 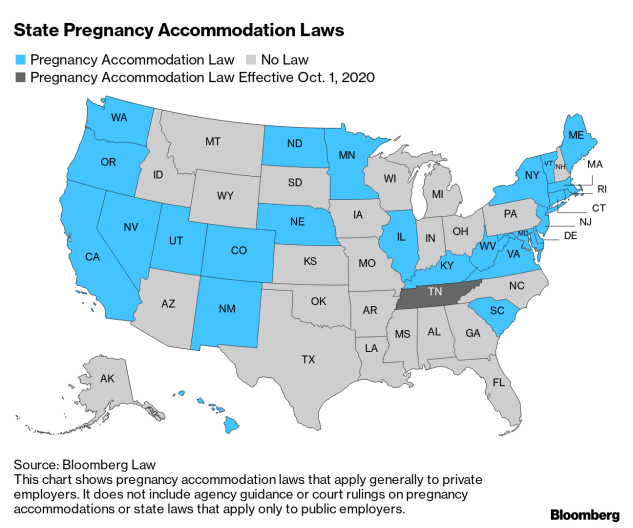 Notably, many state laws cover more employers, include more generous filing periods for workers’ claims, and offer different remedies than the current federal proposal. The broad range of protections means that, even if the bill passes Congress as it is now, these state statutes aren’t going anywhere. Any resulting federal law would not preempt state laws that offer more generous protections to pregnant workers.