The unions representing passenger service and reservation workers at American Airlines have an unenviable distinction: They’re the first to renegotiate an airline contract since federal Covid-19-related aid for the industry ran out. As such, they’re likely bargaining for their jobs more than for pay raises or benefit improvements.

U.S. air carriers have announced the furlough of at least 38,000 workers since Sept. 30, when the first payroll support program expired without a new stimulus plan in place to help airlines and some other hard-hit industries continue paying their workers. About half of that total — some 19,000 workers — have come from American Airlines.

The existing AA contract, expiring Nov. 30, covered about 14,500 members of the Communication Workers of America and the International Brotherhood of Teamsters when it was ratified in 2015. It’s hard to assess the size of the bargaining unit now.

The last major airline to negotiate a union contract was United Airlines, which obtained late-September pay concessions from pilots to avoid layoffs when it became clear that a second stimulus package would not be imminent. 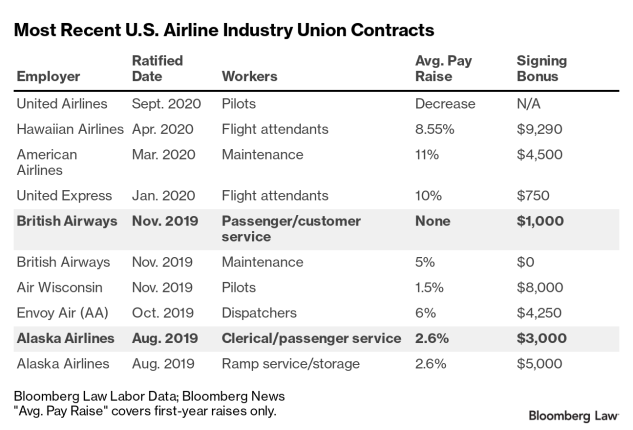 That’s a bad omen for the CWA and Teamsters. Airline customer service workers typically negotiate the lowest pay hikes and bonus packages in the industry, as the above list of recent settlements illustrates. Seeing pilots leave their bargaining table with pay cuts can’t be giving passenger service reps a good feeling.

Even worse, the expiring contract is itself an anomaly that cannot be duplicated. A product of the 2014 merger between nonunion AA and unionized US Airways, the deal right-sized the various worker groups with an eye-opening average first-year wage increase of 30%.

Given that background, any contract negotiated in 2020 was going to be a step down. The question in the midst of the current economic crisis is: How far down?