On Mar. 18, a laid-off customer-service representative for one of the airline companies attended an employee orientation in Dallas. He found himself packed into a room with about 70 other applicants, sitting shoulder-to-shoulder to watch a PowerPoint presentation about what it’s like to work for the online retailer.

The man, who provided a smartphone photo to document his experience, said the event was exactly like one he attended last year for a seasonal holiday job with Amazon. In other words, there were no special precautions to keep attendees safe from the coronavirus. When the man raised concerns about the crowded conditions, he said an Amazon manager mocked him and a fellow recruit sneered. 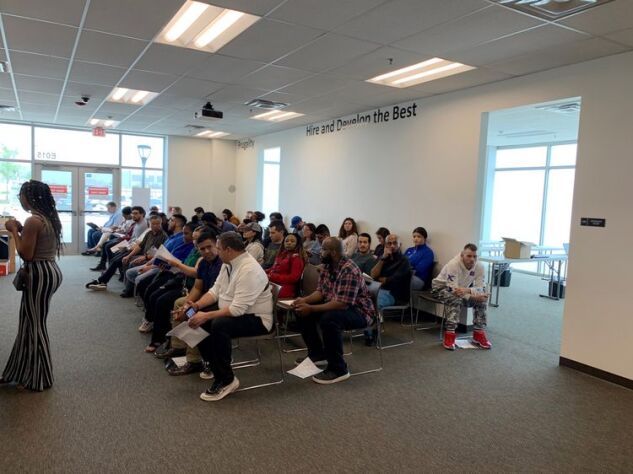 Attendees sit next to each other at an Amazon employee orientation in Dallas on March 18.
Source: Bloomberg

“They made jokes and told me to leave if I was unhappy,” he said, adding that one manager said Amazon’s operations were exempt from the rules because the company is considered an essential service. “They didn’t care one tiny bit.” The former customer rep took the job but still worries about getting sick.

Amazon also ignored official social-distancing guidelines at mid-March events near Portland, Oregon, and in Kenosha, Wisconsin, according to two applicants. A fourth person who attended an Amazon job fair in West Jefferson, Ohio, said she was sent home and asked to return another day because the gathering was too crowded, suggesting precautionary measures are in place at least at some events or Amazon is changing its practices. 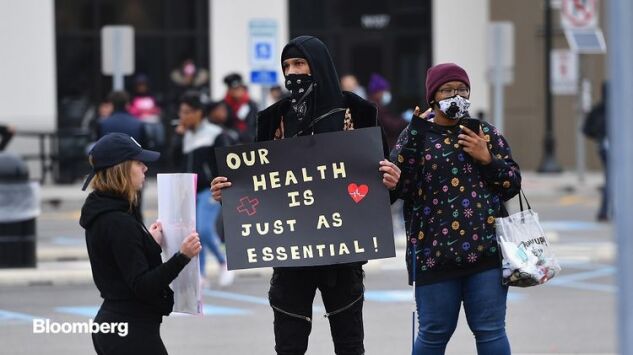 Fired Amazon Employee Says Workers Are ‘Scared for Their Lives’

The absence of social distancing at Amazon hiring events recently made the rounds on social media. One user tweeted photos he said were taken at recent recruiting event in Los Angeles. Another complained on Twitter that the event she attended, where people were in close proximity on a line, wasn’t safe. She didn’t disclose the location. Bloomberg was unable to reach those people.

In an emailed statement, Amazon said it has updated its recruiting practices to avoid large crowds and keep applicants safe, but it declined to say precisely when it made the change.

In its initial rush to hire 100,000 people to meet surging demand from customers fearful of visiting physical stores, Amazon dusted off its holiday season recruiting playbook: holding events with lines snaking through hallways and crowds packed into meeting rooms to watch videos, submit identification and fill out paperwork. The practices violate official Covid-19 safety guidelines, which include avoiding large gatherings and maintaining at least six feet of distance from others.

Amazon is widely seen as an indispensable service amid the pandemic, providing such essentials as food, cleaning supplies and medicine. That hasn’t stopped critics from accusing the company of putting customers ahead of its warehouse workers. These employees aren’t simply handling essential goods but also returns and packing toys, clothes and cosmetics. As the outbreak spreads and more cases are confirmed among Amazon’s warehouse workforce, demonstrations and walkouts have erupted in the U.S. and Europe along with from lawmakers and regulators for the company to improve working conditions.

On Monday, workers staged a walkout at Amazon’s Staten Island warehouse, where three more cases were reported Tuesday evening; they called for the facility to be shut down for cleaning. Hours later, workers at a Chicago depot picketed outside their facility. And in Romulus, outside Detroit, on Wednesday, a group of Amazon employees lined the sidewalk of their warehouse, complaining about a lack of transparency from management and beseeching Chief Executive Officer Jeff Bezos to shut it down.

Amazon has lauded the bravery of its workers delivering essentials during the crisis and said it’s protecting them through social distancing requirements and stepped-up cleaning.

With the economy imploding, many Americans are willing to toil at an Amazon warehouse. Almost 4 in 10 would have difficulty covering a sudden $400 emergency expense, according to a survey on economic health released in May by the Federal Reserve, highlighting the precarious financial condition of many hourly workers living paycheck to paycheck. A record-breaking 3.3 million people filed jobless claims in the week ending March 21, and experts say unemployment could , five points higher than the Great Depression’s jobless peak.

Amazon’s March 16 announcement that it would be hiring and boosting pay represents a lifeline to thousands of people who have lost their livelihoods in the travel, leisure and hospitality industries. “There are very few jobs right now, and millions of people are going to want them,” said Fred Goff, who runs Jobcase, a job search and networking site for hourly workers. “Amazon was ahead of the curve with $15 an hour and announced temporary raises. They’re not going to have a problem hiring people.”

Vancouver, Washington, resident Robin Guyton, 62, is among them. She had part-time jobs bringing developmentally disabled people on outings to shopping malls and bowling alleys, but her hours were sharply reduced since everyone has to stay home. Amazon beckoned with warehouse work that pays up to $20 an hour and health benefits. She attended a hiring event near Portland in March and accepted a job offer that day.

“It’s a big company and in times like this, their services are more in demand, so there’s some job security,” she said. “This whole thing took the wind out of my sails, and I just need a job to pay the bills.”

Good pay, benefits and job security outweighed her alarm about the crowded job event, where she said people were packed side-by-side at tables to fill out online applications on shared computers that weren’t cleaned between uses.

“I was so stunned, but I was so desperate to get the job I just did what I could by staying as far away from people as I could,” she said.

Walmart Inc., Costco Wholesale Corp., Kroger Co. and CVS Health Corp. are all also ramping up recruitment to meet surging demand for essential supplies. Some have sped up hiring practices by offering virtual interviews and forgoing drug and background checks, reducing the need to pack people into big job fairs.

Walmart, which is hiring 150,000 people, compressed its hiring process from approximately two weeks to just 24 hours and is giving verbal offers by phone following online assessments. Other companies like Kroger use online platforms to check the identification of applicants so a bunch of new workers don’t have to attend big events to go through government-required ID verification, said Julie Pearl, co-founder of Tracker Corp., one of several companies that provide a remote ID checking service.

One speed bump for the companies hiring is a new stimulus package that includes enhanced unemployment benefits that could give some workers pause about taking grocery clerk, warehouse or delivery jobs that they think are too risky during the outbreak, said Gary Burtless, a senior fellow in economic studies at the Brookings Institution.

“There are a lot of people with low or average pay who will find that their income when they are laid off will rise, not fall, as a result of the special unemployment benefits,” he said.

Amazon could be taking steps to make some hiring events safer for applicants. One woman, who previously worked with people with disabilities, applied for an Amazon warehouse job and said she and about 20 other applicants were sent home from a hiring event in West Jefferson, Ohio, on March 21 because it was too crowded and asked to return another day.

She returned three days later to find a much smaller group of about 25 people and some seats were roped off. The orientation was shortened by two hours to limit time people spent near each other, said the woman, who was between jobs when she heard an advertisement that Amazon was hiring.

The warehouse manager where she works has been sending daily emails reminding employees of the importance of their jobs in keeping essential goods moving during the pandemic, she said, and hand sanitizer was available throughout the facility during her first week on the job.