There are many reasons Tonya Ramsay might have just kept working. The 29-year-old, who works in the shipping department of an warehouse outside Detroit, pays the mortgage at the house where she lives with her boyfriend and 11-year-old son. But she was scared. Managers at the 855,000-square-foot facility where Ramsay works said two of her co-workers had been diagnosed with Covid-19. Ramsay suspected—correctly, it turns out—there were more cases to be identified.

Worried about their safety, Ramsay and a few dozen colleagues walked off the job on April 1. With some carrying signs, they stood—6 feet apart—on a sidewalk outside the warehouse and appealed to Amazon Chief Executive Officer to shut down the facility and authorize paid leave for workers so they wouldn’t risk exposure to the respiratory virus. Drivers in passing cars honked in support.

Historically, Michigan is union territory. Amazon isn’t. The walkout at Ramsay’s warehouse capped a remarkable 72 hours in the online retailer’s occasionally tense relationship with its workforce. Employees at depots in three states staged , and workers at Amazon-owned Whole Foods Market called a .

The retail giant has fended off organized labor in its U.S. warehouses over the years through a mix of well-worn, corporate anti-union tactics and perks aimed at reassuring the workforce—and the shopping public—that Amazon is a generous employer. But the new coronavirus threatens to do what unions have failed to do for years: . Still, observers say Bezos & Co. are betting that even in a national emergency, occasional hardball tactics in dealing with their own employees won’t do lasting damage to the goodwill the company has amassed with shoppers, especially when they need Amazon more than ever. 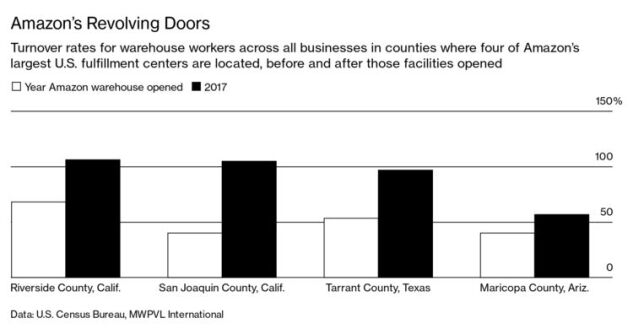 The company was on track to account for about 39% of online purchases in the U.S. this year, according to , before the outbreak of the coronavirus led to a surge in online shopping. Executives weren’t planning for a pandemic, but they’d already created a corporate infrastructure designed to thrive in it. In the last decade, Amazon built hundreds of highly automated warehouses, sorting facilities, and smaller sites geared toward quick urban deliveries. It uses dozens of freighter aircraft; companies working on its behalf operate tens of thousands of delivery vans.

The company has to ensure that the people staffing all that show up to work as the . When the first rumblings of discontent appeared early last month, it tacked on a temporary raise to its $15 an hour starting wage and introduced two weeks of sick pay for infected or quarantined people. It later offered more lucrative overtime.

“Like every other business that’s open and trying to meet huge demand, they’re just trying to manage and keep as many people working as they can,” says , a partner with Saul, Ewing, Arnstein & Lehr, who’s represented companies in labor disputes. “It’s a question of managing the workforce and not letting a group—a highly vocal group—control what they do with 800,000 employees.”

Amazon gets high marks in surveys of corporate reputations, the fruits of years of sterling customer service and innovative products. But executives at its headquarters in Seattle are aware that its heavy-handed tactics with workers could deal lasting damage to that stature and potentially make customers less likely to shop on its sites. Some consumers are already showing an appreciation for the work that keeps essential goods moving during a crisis, as they tip grocery clerks or continue to write checks to the day care providers or dog walkers they’re unable to use during the pandemic. 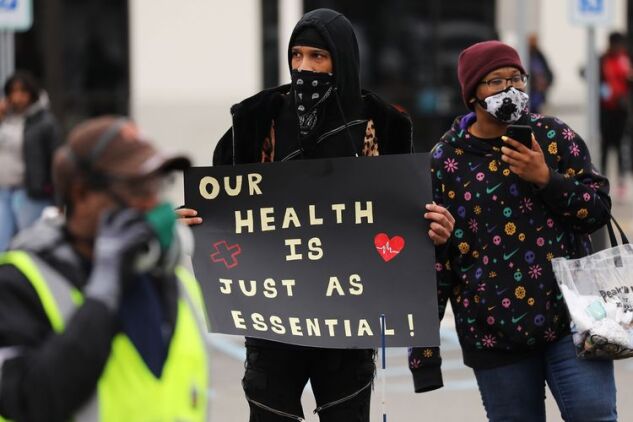 Amazon’s opposition to unions brings a risk of public-relations headaches, such as when it tried to build a massive corporate campus in Queens, N.Y. Its position on unions played a big role in turning local elected officials against the planned 25,000-person campus, which was scuttled in February 2019 in part because of the opposition.

Helping to lead that campaign against Amazon was the Retail, Wholesale and Department Store Union, which has offered aid to workers trying to organize at Whole Foods and has its sights on a massive Amazon warehouse in Staten Island.

, the union’s president, says he expects the pandemic to change how Americans view workers in critical jobs, opening up an opportunity to organize. “I think there’s greater consciousness of the importance of the work that’s done by low-wage workers in our society,” he says. “Workers are going to see how their employers handle this crisis, and they’re going to understand that they can no longer be passive, but they need to have a collective voice.”

Recently, that voice was embodied by Chris Smalls, a manager in the outbound department of Amazon’s Staten Island warehouse who was after he led a walkout on March 30 to demand better measures to keep workers safe. Amazon says he was fired because he returned to the warehouse after the company had ordered him into a quarantine following contact with someone diagnosed with Covid-19. As Smalls’s plight garnered wide media attention, Amazon executives sketched out a plan to portray him as immoral and a threat to his co-workers. “Make him the most interesting part of the story, and if possible make him the face of the entire union/organizing movement,” , Amazon’s general counsel, wrote in meeting notes first obtained by Vice News. (Zapolsky said his comments were “personal and emotional.”

Amazon called its employees “heroes” and said it’s taking measures to support each one. It’s said a small number of workers have participated in the walkouts and called their critiques unfounded.

, a professor of management at the Wharton School at the University of Pennsylvania, says the memo was evidence that Amazon sees the battle over public opinion as more important than communications with its front-line workers. That could be a mistake, he says.

Still, workers face steep odds should they pursue formal union recognition. Turnover at Amazon warehouses is high, leaving few workers with the expertise and institutional memory to seek concessions from management. And, eventually, the crisis will end. Meanwhile, the economic damage has added millions of people to the ranks of the unemployed, some of whom would likely be content with whatever labor conditions Amazon would demand, as long as it meant a paycheck. “The increase in unemployment will be so large, it’s going to change the dynamic of the job market from a worker’s market to an employer’s market,” says Julia Pollak, an economist with ZipRecruiter.

To contact the author of this story:
in Seattle at mday63@bloomberg.net

To contact the editor responsible for this story:
at hchuaeoan@bloomberg.net