A union supporter demonstrates outside the Amazon.com Inc. fulfillment center in Bessemer, Ala., on March 29.
Photographer: Patrick T. Fallon/AFP via Getty Images

The federal labor board’s decision to order a do-over union election at an warehouse in Alabama delivered a rebuke to the world’s largest e-commerce company, but it may make little difference to the final outcome.

The Retail, Warehouse and Department Store Union continues to face challenges in its effort to organize some 6,000 workers at an Amazon warehouse in Bessemer, Ala., after losing the first election last spring by a margin of more than 2 to 1. The union would need to make up more than 1,000 votes, and nationwide nearly half of all recent re-run elections have fallen short, according to a Bloomberg Law analysis.

While Amazon’s push to beat back the union drive for a second time will be closely watched by National Labor Relations Board officials, the company already has the upper hand after persuading the vast majority of employees at the Alabama facility to vote no the first time, labor lawyers say.

It is rare for the NLRB to order re-run elections, but unions have prevailed in Round 2 in 55% of all board-sanctioned contests since 2012, according to federal labor board data analyzed by Bloomberg Law. There were 234 re-do elections held during that time, with 128 resulting in a union victory and 106 ending in loss. Organized labor was less successful in do-over elections to remove a union from a workplace, winning 16 of 39 contests, a win rate of 41%. 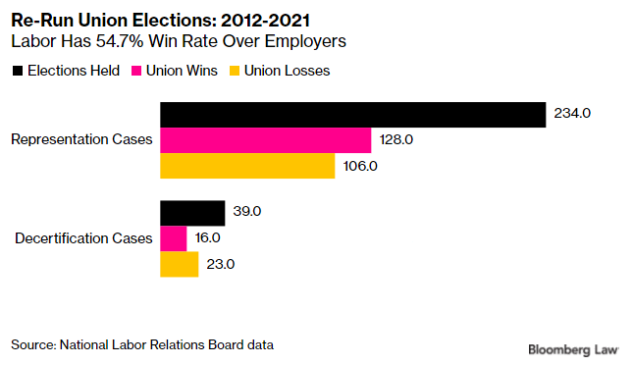 In granting a second election, the NLRB regional director substantiated allegations that Amazon had pressured workers to cast their ballots at a mailbox in view of warehouse security cameras, a setup that may have intimidated voters and suppressed turnout. Amazon’s “flagrant disregard” for the board’s typical mail-in ballot procedure “made a free and fair election impossible,” the regional director, Lisa Henderson, wrote in her Monday decision.

The first election was a landslide for Amazon, which won nearly 1,800 of the 3,000 votes cast. The union garnered 738 votes. Federal officials set aside about 500 contested ballots.

“When you look at that, it’s hard to think that ‘but for’ the shenanigans with the mailbox, the union would have won this,” said Jeffrey Hirsch, a former NLRB attorney and labor law professor at the University of North Carolina. “I would not bet there’s going to be a union in that plant.”

The NLRB typically orders re-run elections in cases where the employer is found to have illegally tampered with the first election, either by directly manipulating the ballots or, more often, by intimidating workers from voting.

But many of the union victories in second chances since 2012 have involved fewer workers and tighter margins than those in the Amazon case. In 2018, a proposed union of 5,000 Harvard University graduate students lost an election by fewer than 200 votes but won a re-run election later that year by 400.

Whatever the result, the re-run in Alabama is likely to produce more negative publicity for Amazon, which this week was also accused of providing “misleading or grossly incomplete” data on by the union-backed Strategic Organizing Center. The second contest also will give the union free publicity to highlight workplace safety, pay disparities, and other pandemic-related struggles.

The company—which has no unionized employees in the U.S.—also faces an organizing campaign from the International Brotherhood of Teamsters, whose newly elected president, Sean O’Brien, has pledged to take a more aggressive stance toward Amazon. It has also faced union pressures in New York, where 2,000 workers at a Staten Island warehouse filed for an election before withdrawing their petition earlier this month to gather more signatures.

RWDSU’s challenge is perhaps even greater in rural Alabama, where Amazon’s $15 an hour minimum pay outpaces other employers.

“Our employees have always had the choice of whether or not to join a union, and they overwhelmingly chose not to join the RWDSU earlier this year,” Amazon spokeswoman Kelly Nantel said in a statement Monday on the Alabama election. “It’s disappointing that the NLRB has now decided that those votes shouldn’t count.”

It may be difficult for RWDSU to change workers’ minds, labor lawyers said, given that Amazon will have had more time to harden opposition to the union.

A date for the second election hasn’t been set. The regional director’s order can be appealed to the full NLRB, which Democrats control 3-2.