The Amazon warehouse in Bessemer, Ala., on March 29, the day voting in the union election officially ended.
Photographer: Patrick T. Fallon/AFP via Getty Images

Following its blow-out defeat at the facility in Bessemer, Ala., the Retail, Wholesale and Department Store Union said Friday it will mount a two-pronged legal attack on the online retail giant.

First, the union will file objections to the election with the National Labor Relations Board regional office, attempting to get the results thrown out based on Amazon’s alleged disruption of the voting process.

Second, the union said it will lodge unfair labor practice charges against the company for allegedly violating federal labor law during its anti-union campaign. The matters may be consolidated.

1. What does the union allege?

Amazon “interfered with the right of its Bessemer, Alabama employees to vote in a free and fair election,” the union charged in a statement issued after its election loss.

While the RWDSU didn’t immediately provide a full list of supporting allegations, it said the installation of a mailbox on the warehouse property violated an NLRB order; potentially leading workers to believe—wrongly—that Amazon would play a role in collecting and counting votes.

Email obtained by the Washington Post showed that Amazon pressed the U.S. Postal Service to install the mailbox just as the election began.

The union also objected to the company holding mandatory anti-union meetings to dissuade voters, which are legal under federal law and remarkably effective for employers. It also accused Amazon of spreading misinformation about mandatory union dues. Alabama is a “right-to-work” state, meaning employees can opt out of dues payment. 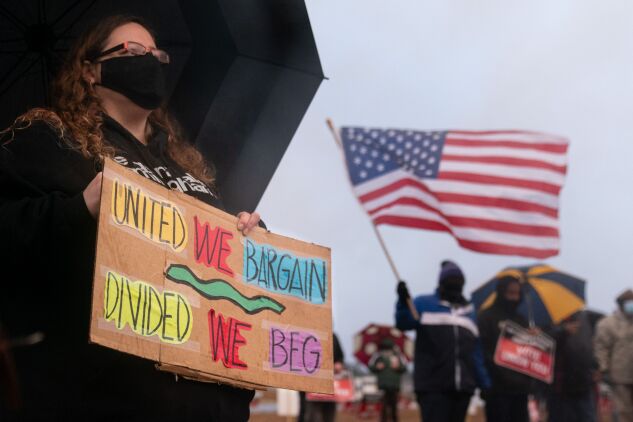 Supporters of the Retail, Wholesale and Department Store Union, which is trying to organize workers at an Amazon.com Inc. fulfillment center in Bessemer, Ala., take part in a rally near the facility on Feb. 6.
Photographer: Elijah Nouvelage/Bloomberg


RWDSU may formally pursue other allegations as well. In February, activists reported that Amazon changed the timing of a traffic light outside the warehouse to move workers off-site faster, marking it harder for union organizers to talk to individual employees. Labor board attorneys also have accused Amazon of punishing and firing pro-union workers at other warehouses, suggesting that similar allegations could pop up in Bessemer.

2. What will the NLRB do with the election objections?

An NLRB regional director may assign staffers to investigate the claims that Amazon’s conduct so tainted the election process that the agency should throw out the results. The regional director, which acts somewhat like a judge in representation cases, will likely schedule a hearing in the coming weeks to hear testimony on the union’s allegations.

The company’s conduct need not be illegal to ruin the election.

Amazon will probably push back aggressively on each of the union’s claims, disputing that the alleged conduct actually occurred or had the negative impact that the union asserts.

“We said from the beginning that we wanted all employees to vote and proposed many different options to try and make it easy,” Amazon spokeswoman Katelyn Richardson said by email. “The RWDSU fought those at every turn and pushed for a mail-only election, which the NLRB’s own data showed would reduce turnout. This mailbox—which only the USPS had access to—was a simple, secure, and completely optional way to make it easy for employees to vote, no more and no less.”

3. What will the NLRB do with the unfair labor practice charges?

The fate of the union’s unfair labor practice claims will be left up to an NLRB regional director, a deputy of the general counsel who acts as a prosecutor in those disputes. If the regional director finds merit to the union’s allegations, it could bring the case before an administrative law judge; the result would likely be appealed to the agency’s five-member board in Washington.

That’s where things become less certain. Peter Sung Ohr, the acting general counsel selected by President Joe Biden, would most likely side with the union, though it’s not a given.

But Republicans still hold the three-member majority on the currently four-member NLRB, at least until August, when the term of member William Emanuel expires. That means if the case comes to the board quickly, the majority would likely side with Amazon.

But if Biden appoints a Democrat to fill Emanuel’s seat, as well as another vacancy, the new majority could side with the union.

4. Could the union still win?

The union could get another shot in a re-run election if the NLRB sets aside the original vote results based on the election objections.

The unfair labor practice proceedings also give the union a potential route to a re-run election, depending on how the board rules.

The board could theoretically order Amazon to bargain with RWDSU for a union contract if it decided the unfair labor practices were so egregious that it’s impossible to hold a fair election at the Bessemer facility.

But the chances of it imposing that remedy appears to be very slim. Courts don’t look kindly on the NLRB recognizing a union that lost its election, let alone those that got blown out.

ANALYSIS: A Win at Amazon Would Be Labor’s Largest in 20 Years

(Updated with statement from Amazon in 12th paragraph. )

To contact the editor responsible for this story: at aharris@bloomberglaw.com; at jmeyer@bloombergindustry.com