A truck for Amazon.com Inc. exits a warehouse in the Staten Island borough of New York City in March 2020.
Photographer: Michael Nagle/Bloomberg

Amazon has bolstered its lobbying ranks with a series of hires steeped in advancing corporate interests on workplace issues, positioning the e-commerce giant to weather union organizing drives and potential regulatory changes.

She’s at least the fifth notable hire amid a systematic targeting of Beltway labor insiders that started at the end of 2019, when Kai Hirabayashi left to become Amazon’s senior manager of public policy, and has gained speed in recent months. All five lobbyists have a record of helping companies respond to union-backed policies in Washington, D.C.

Beall, who will focus on relations with Democratic members of Congress, joins Amazon on the same day that thousands of workers at four Amazon facilities in Staten Island, N.Y. were poised to submit signatures asking the National Labor Relations Board to hold a union representation election. Several employee actions during the pandemic have focused national attention on working conditions at the second-largest private employer in the U.S.

“A build-out will help a company like Amazon better understand what’s going on and what they need to be prepared for—whether it’s from Congress or regulatory agencies or third-party groups,” said Michael Eastman, a Washington attorney who spent a decade as executive director of labor policy at the U.S. Chamber of Commerce. “They’ll be better attuned because they have more people monitoring those things.”

In September 2020, Lizzy Simmons, a workplace lobbyist at the National Retail Federation, jumped ship to Amazon, followed in July of this year by Patrick Brady, formerly of Retail Industry Leaders Association, and in August by Drew Schneider, who had worked Capitol Hill connections for the National Association of Manufacturers. 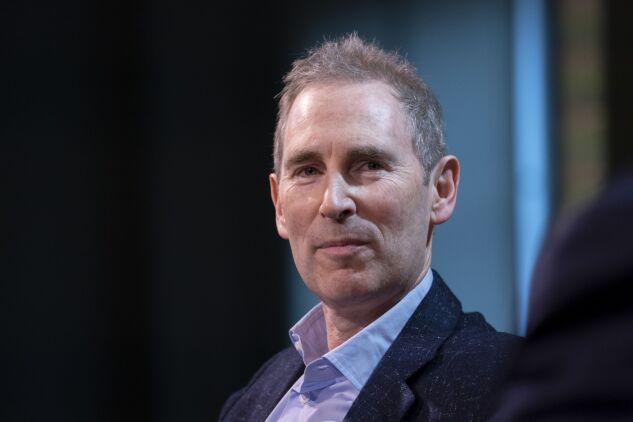 Andy Jassy, CEO of Amazon.com Inc., is shown during an event in Seattle on Oct. 5.
Photographer: David Ryder/Bloomberg

Amazon declined to address the personnel additions, aside from referencing the company’s support for a nationwide $15 minimum wage in a brief statement. Several outside lobbyists and union organizers have taken note, voicing a mix of resentment and awe that the online marketplace and tech powerhouse has rapidly amassed arguably the deepest labor advocacy bench of any individual lobbying organization or corporation.

But by recruiting lobbyists who skew heavily toward management perspectives on labor issues, Amazon will draw criticism that its work on Capitol Hill and elsewhere is at cross-purposes with the commitment then-CEO Jeff Bezos made in April for the company to become the “Earth’s best employer and Earth’s safest place to work.”

“Hiring this set of lobbyists who have very strong and clear records in fighting against workers’ rights—it just demonstrates the hollowness of the Bezos rhetoric around things like health and safety and racial justice,” said Rebecca Givan, an associate professor at Rutgers University’s School of Management and Labor Relations.

Employment policy observers who discussed Amazon’s hires with Bloomberg Law noted the company now has enough labor lobbying muscle to allow each member to specialize in subset policies, such as immigration or worker safety.

That appears to be the case with Hirabayashi, who earned a solid reputation in business circles during stints as a Republican aide for the Senate labor committee and as a labor law policy manager at the U.S. Chamber of Commerce. He was responsible for a wide-ranging labor portfolio at Amazon, but recently pivoted to focus on immigration as the labor team has expanded, several sources familiar with the arrangement said.

Amazon has also recently brought on at least three accomplished workplace experts from Big Law to staff its general counsel’s office and other units, as well as a conservative economist for its research division—each with jobs dedicated to labor.

The labor hires come as Amazon has been expanding its workforce across multiple business units, driven in part by increased customer demand during the pandemic. At the same time, it has marked out positions on federal labor policy that are more progressive than the business mainstream, including on a $15 minimum wage and its support for workplace equality legislation.

Yet its reputation for placing warehouse and trucking workers in grueling, closely monitored conditions has gained notoriety during Covid, as highlighted by a failed union organizing drive—now being appealed—at an Alabama warehouse. 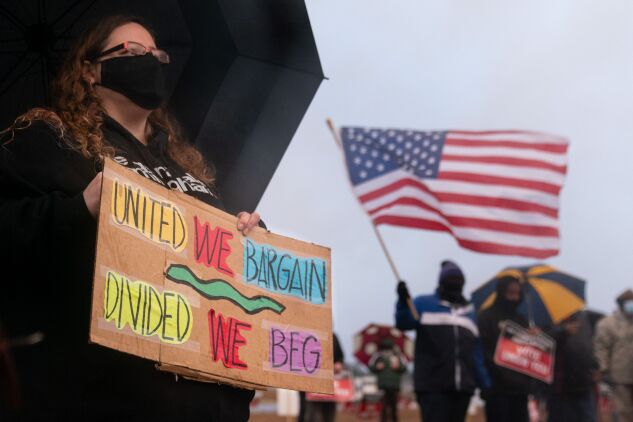 A union supporter takes part in a demonstration near the Amazon.com fulfillment center in Bessemer, Ala., that was subject to a union election earlier this year.
Photographer: Elijah Nouvelage/Bloomberg

While its lobbying hires will help it prepare for future organizing battles, they also give ammunition to unions hoping to become the first bargaining representative for Amazon workers in the nation.

“This just further shows that the company is willing to spend vast amounts of money and resources to deny its workers a true voice on the job and a pathway to improve their working conditions,” Randy Korgan, the International Brotherhood of Teamsters’ national director for Amazon, said in a prepared statement.

The Teamsters in June launched a national campaign to organize Amazon workers. The fate of that effort and organizing pushes by other unions—all of which the company has opposed—will hinge in part on how Biden appointees at the National Labor Relations Board shape the legal landscape.

New NLRB interpretations under President , who’s pledged to be the most pro-labor president in history, will be designed to ease union organizing, and Democrats are attempting to establish steep penalties for companies that retaliate against unions through the reconciliation package that’s moving closer to an agreement on legislative text.