The Amazon logo is projected on a screen at a press conference in New York on September 28, 2011.
Photographer: Emmanuel Dunand/AFP/Getty Images

A union organizer and two workers were arrested Wednesday outside an warehouse in New York, the latest sign of escalating tension between the e-commerce giant and labor groups.

Christian Smalls, president of the fledgling Amazon Labor Union, was charged with trespassing, resisting arrest and obstructing governmental administration, a New York Police Department official said in an interview. The Amazon employees arrested by police were Brett Daniels and Jason Anthony, two members of the Amazon Labor Union. Smalls tweeted around 9:30 p.m. Wednesday that he had been released: “I’m free !! and I’m not stopping.”

Earlier this month, the ALU and Amazon reached an agreement to hold a union election at the JFK8 fulfillment center, where the arrests occurred. The in-person vote will be held from March 25 to March 30. 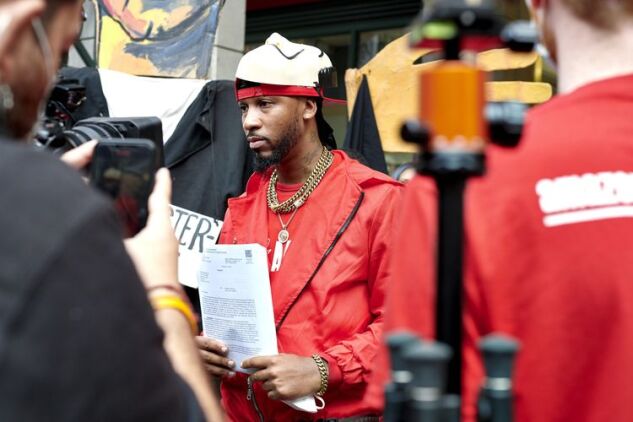 Smalls had driven into the parking lot to deliver food and union literature for employees to share with co-workers, according to Connor Spence, a union vice president who said he witnessed the incident.

“I think it started off as a scare tactic that completely went off the rails,” said Spence, who accused the company of calling the police in an effort to intimidate employees in the lead-up to the election.

Amazon said that it called the police on Smalls, but “did not call the police on employees.” Spokesperson Kelly Nantel said that “Smalls -- who is not employed by Amazon -- has repeatedly trespassed despite multiple warnings. Today, when police officers asked Mr. Smalls to leave, he instead chose to escalate the situation and the police made their own decision on how to respond.”

The union’s attorney, Seth Goldstein, said that by bringing in police the company had violated the terms of a settlement reached with the National Labor Relations Board restricting anti-union tactics. Smalls didn’t respond to requests for comment.

An Amazon spokesperson said that the settlement involves the rights of current employees to solicit co-workers on the property, not non-employees.

Smalls worked at Amazon for more than four years before being fired in 2020 for what the company said was a violation of safety guidelines. Smalls said he was protesting Amazon’s inadequate Covid-19 policies.