In an agreement with the federal labor board, Amazon.com Inc. pledged to give workers more room to conduct union activity inside warehouses, such as this one in Robbinsville, N.J.
Photographer: Michael Nagle/Bloomberg

A sweeping settlement between and the federal labor board could give unions their best chance yet to establish a beachhead in efforts to organize workers at the nation’s largest e-commerce company.

In the agreement, made public Dec. 23, Amazon promised to give workers more leeway to conduct union activity inside warehouses, and it pledged to inform current and former employees of their labor rights through a direct email—an extraordinary step that could reach more than 1 million workers.

The settlement shows how Democratic leaders at the National Labor Relations Board hope to wield federal power to give unions a greater ability to organize Jeff Bezos’ business empire. The company has expanded at a remarkable pace in recent years and drawn criticism for both its ubiquity and what opponents describe as anti-labor and monopolistic practices.

The pact could embolden Amazon workers upset over the company’s response to the coronavirus pandemic, who have watched workers in adjacent industries walk off the job in recent months, taking advantage of a labor shortage that gives workers increased leverage. At the very least, it may show workers that Amazon isn’t untouchable.

“You sort of have this David and Goliath story going on,” said Anne Lofaso, a former board attorney and labor law professor at West Virginia University. “Maybe the giant isn’t down, but David just got a hit.”

The settlement arose from six complaints, three in Chicago and three in New York, from workers who alleged Amazon was trying to unlawfully blunt their organizing efforts. It was first reported by The New York Times. In the settlement document, Amazon acknowledged that workers weren’t allowed to enter break areas and other common spaces other than during 15-minute periods at either end of their shifts, preventing them from talking to one another about organizing and other matters. The company pledged to rescind that policy. 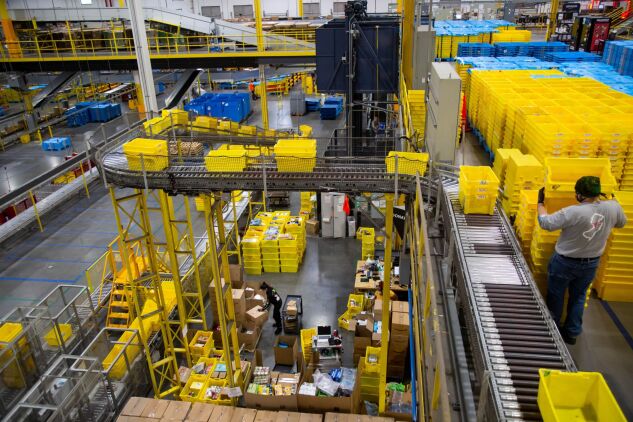 A worker loads bins onto a conveyor at an Amazon fulfillment center in Robbinsville, N.J., on Nov. 29.
Photographer: Michael Nagle/Bloomberg

“WE WILL NOT tell you that you cannot be on our property, or that you need to leave our property 15-minutes after the end of your shift, or threaten you with discipline or that we will call the police, when you are exercising your right to engage in union or protected concerted activities by talking to your co-workers in exterior non-work areas during non-work time,” the company said in the notice to employees, which was included in the settlement.

The agreement comes as the Retail, Wholesale and Department Store Union prepares for a re-run election at an Amazon warehouse in Bessemer, Ala.

An NLRB regional director in November ordered a new representation election after finding the company may have intimidated workers by pressuring them to cast their ballots in a newly installed mailbox that was in view of warehouse security cameras. A group of workers on New York’s Staten Island also re-filed a petition for a union election on Dec. 22 after failing to meet the NLRB’s signature threshold the first time around.

The agreement also arrives as the International Brotherhood of Teamsters prepares a broader campaign to organize Amazon warehouses nationwide. The changes under the settlement will give union advocates more direct access to workers and could tamp down fears of retaliation among the rank-and-file.

Brian Rainville, a spokesman for Teamsters President-elect Sean O’Brien, who takes office in March, welcomed the settlement but said it shouldn’t detract from fundamental weaknesses in federal labor law that unions have been trying to correct.

“It’s a good step forward, but labor law should be enforceable everywhere and all the time,” Rainville said. “It shouldn’t take this extraordinary effort.”

A far-reaching bill to rework federal labor law has passed the U.S. House multiple times in recent years, but languished in the Senate—prompting the Biden administration to seek administrative actions federal agencies can take to help unions organize workers.

The agreement is a major step for NLRB General Counsel Jennifer Abruzzo, who in her first five months on the job has taken steps to classify college athletes as employees, seek larger settlements for unlawfully fired workers, and aggressively seek court orders to stop unfair labor practices, among other pro-worker actions.

While the agreement was hashed out at the regional level, Abruzzo’s office undoubtedly played a major role, Lofaso said.

The settlement applies only to certain charges in the six cases and doesn’t prevent the NLRB general counsel from prosecuting additional complaints against Amazon, “regardless of whether the general counsel knew of those matters or could have easily found them out.”

“This settlement agreement provides a crucial commitment from Amazon to millions of its workers across the United States that it will not interfere with their right to act collectively to improve their workplace by forming a union or taking other collective action,” Abruzzo said in a statement.