In the last years of his life, the late AFL-CIO President Richard Trumka often included a warning in his public speeches: Labor leaders once thought that technology would create more economic equality by increasing workers’ efficiency and raising standards of living; but that assumption, he’d say, was proven to be false by the rise of Big Tech, automation, and e-commerce.

Trumka’s remarks were a tacit acknowledgment that the labor movement was still losing ground in what he saw as a second industrial revolution. The exploitation of workers would continue, he predicted, if unions didn’t fight back.

That task will now be left to Trumka’s successor as head of the nation’s largest labor federation following his death earlier this month. The federation faces its first major test of the post-Trumka era Friday, when the AFL-CIO executive council will select a leader to serve out the last 10 months of Trumka’s term.

The executive council’s choice will inherit a steady decline in union membership, a workforce battered by the pandemic, and a restless left in the 12 million-member federation that has a starkly different vision than the politically focused mission Trumka espoused.

“Over the last couple of decades, there’s been an ongoing debate about whether the AFL-CIO should put whatever resources it has into helping unions and workers organize, or perhaps put more of its resources into politics and political action,” said Paul Clark, a professor of labor and employment relations at Pennsylvania State University. “They are organizing, but there are people in the labor movement who think they should be doing more of that.”

Trumka, who served as president since 2009, was a union leader from another era, with a lexicon, mustache, and love of deer hunting that echoed the Pennsylvania coal mines from his youth. Yet by the end of his life, Trumka had come to believe that federal labor law needed fundamental change to tackle worker misclassification in the gig economy and other tech-assisted jobs.

Early endorsements by AFL-CIO member unions suggest that Liz Shuler, the federation’s sharp-witted secretary-treasurer, has the inside track to carry on Trumka’s vision. Shuler, who was one of Trumka’s closest advisers and now serves as acting president, has already locked in support of several major member-unions ahead of the vote.

But she could have a formidable challenger in Association of Flight Attendants President Sara Nelson, a leftist firebrand known for her soaring speeches on worker power.

Shuler has taken a commanding lead in recent days, earning pledged votes from AFSCME, the American Federation of Teachers, and the International Association of Machinists. Insiders expect her to win over most, if not all, of the building trades unions, having cut her teeth at the International Brotherhood of Electrical Workers. If that scenario comes to pass, it could give Shuler an insurmountable lead. 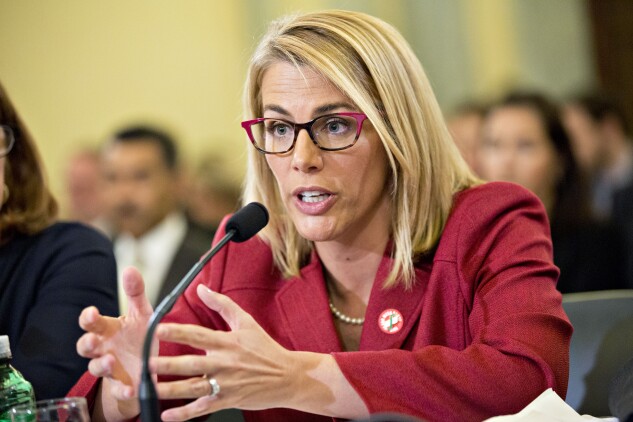 Sara Nelson, international president of the Association of Flight Attendants-CWA, testifies during a Senate Commerce hearing in May 2017.
Photographer: Andrew Harrer/Bloomberg via Getty Images

Nelson hasn’t said whether she’ll make a bid for the presidency Friday, or run for a full four-year term at the AFL-CIO’s convention in Philadelphia next year. A spokesman for Nelson suggested Thursday she’s leaning toward the latter option.

“The sudden, tragic death of Richard Trumka triggered an AFL-CIO constitutional provision to put in place a new president within a matter of days,” spokesman Andrew Feldman said in an email. “Working people deserve the time to be a part of this conversation. There is no doubt this next year leading up to an open convention provides a basis for lively discussion and debate about how to make unions and the rights that come with them accessible to all working people.”

An AFL-CIO spokesperson declined a request to make Shuler available for an interview.

Although the AFL-CIO president is considered the leader of the labor movement, rank-and-file members have little say in selecting the position.

There’s no general election; the AFL-CIO executive council, consisting of about 60 union leaders and state-level officials, will hold a majority vote Friday to pick someone to finish Trumka’s term, a process reserved for the rare instance when a sitting president dies or quits.

Then, at the convention in June 2022, there will be an election to select a candidate for a four-year term. Under that process, member unions are awarded a number of delegates roughly proportional to the size of their membership, meaning that larger unions carry more weight.

In that context, Shuler’s endorsements from big players in the AFL-CIO fold make her the clear front-runner.

As second in command to Trumka for more than a decade, Shuler headed the federation’s efforts on adapting to technology, green energy, and appealing to a younger and more diverse population. If chosen, she’d be the first woman to lead the AFL-CIO.

“There are certain things where she has been much more forward-looking,” said Andy Stern, former president of the Service Employees International Union, which split from the AFL-CIO in 2005. “She’ll reinforce what she thinks is important and pick a number of issues where she thinks, particularly going into the future, that the AFL-CIO needs to figure out what it’s going to do.”

Nelson, who rose to prominence on the same brand of working-class fury as Sen. (I-Vt.), has been discussed as a candidate to lead the AFL-CIO since she called for a general strike in 2019 during the 35-day government shutdown.

Nelson, a flight attendant since 1996, says she was inspired to get more involved with her union after 9/11. She became communications director for AFA’s United Airlines chapter in 2002, then vice president in 2011, and president in 2014.

The two have vastly different leadership styles. Nelson has some of the same gifts as the late Trumka—both gifted orators capable of inspiring a room of union members into action at a moment’s notice.

While Shuler’s speeches aren’t as fiery as Nelson’s, she’s respected among AFL-CIO and member-union staff for her affability and sharp managerial skills. Those qualities could help her corral the diverse and sometimes conflicting personalities on the executive council—perhaps better than Trumka could.

“That sort of up-front, in-your-face style is one approach, but it isn’t always the most effective one,” said Marick Masters, a business professor at Wayne State University who studies unions, referring to Trumka. “She has a lot of wealth and experience, she’s articulate, and I think she can make the case effectively.”

Shuler is seen as more moderate than Nelson and her supporters, who believe the AFL-CIO should invest more in new organizing. Shuler is said to favor the idea—as Trumka did—that new organizing should be left to individual unions, and that the federation’s leadership should focus on labor’s political priorities and wielding influence in Washington.

Chief among those priorities is the Protecting the Right to Organize Act, a sprawling package of pro-union legislation that passed the House in March but has stalled in the divided Senate. Trumka’s death galvanized labor to carry the legislation across the finish line, though it faces steep odds of securing the 60 votes needed to advance in the Senate.

“As long as that doesn’t change, it’s going to be very difficult for a new leader to make a significant difference,” said Penn State’s Clark, adding, “Unless the playing field is leveled, labor is going to continually be fighting an uphill battle.”

(Updated with comments from Sara Nelson's spokesman in 10th and 11th paragraphs. )