A worker in San Francisco needs an annual household income of $322,480 to qualify for a median-priced home. Some companies have taken to working with governments to establish affordable housing for employees.
Photographer: Scott Olson/Getty Images

Employees might not be around much to use the perks, though—not when they’re commuting hours a day between downtown and where they can afford to live. Atlassian offers reimbursement for those travel costs, but it doesn’t give employees housing assistance benefits, a company spokeswoman said.

Soaring housing costs are the elephant in the room for tech companies trying to recruit and keep top workers. In San Francisco, an annual household income of $322,480 was required to qualify for a median-priced home in the first quarter of the year. And by raising salaries to try to help workers keep up, companies based in the Bay Area and around Seattle, home of and , can help inflate housing prices even more and push workers still farther away, given the limited supply of properties. 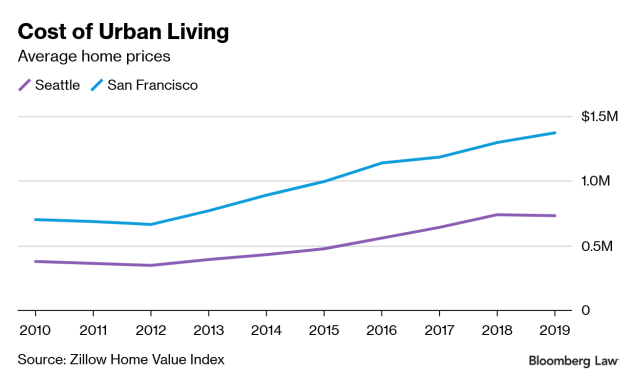 The cost in lost productivity has companies—including , , and Microsoft—looking to work with local governments and affordable housing advocates to invest in housing initiatives across the region.

“It’s a heavy lift to move policy and target bureaucratic systems, but the reality is that is really the root of the problem,” Skyler Olsen, director of economic research at , told Bloomberg Law.

The Rise of the Super Commuter

The Bay Area is home to the most super commuters, with more than 120,000 people commuting at least three hours a day, according to data compiled by Apartment List. Nationwide the number of super commuters increased by 31.7 percent since 2005.

The share of full-time workers who are super commuters, those who spend more than 90 minutes commuting each way, more than doubled for workers in the San Francisco-Oakland-Hayward area, rising from 2.2 percent of workers in 2005 to 4.8 percent in 2017.

In San Jose-Sunnyvale-Santa Clara, the Silicon Valley super commuters rose from 1.2 percent to 3 percent over the same time.

“Construction trades employees who work in the Bay Area, I suspect, were among the first of the middle-income occupations to ‘drive until you qualify,’” said Scott Littlehale, Northern California Carpenters Regional Council senior research analyst. “The rest of the Bay Area workforce is catching up to where construction workers have been at for some time.”

Employers increasingly are concerned about this pattern because the lengthened commute times are “a huge issue that affects your well being to drive that much,” Olsen said. Negative consequences of long commutes can impact stress levels, productivity, and mental well being.

And the commutes are likely to get longer for workers hoping to afford real estate near San Francisco, Los Angeles, and Denver, where suburban cities are on the list of the top rising housing markets in the country. 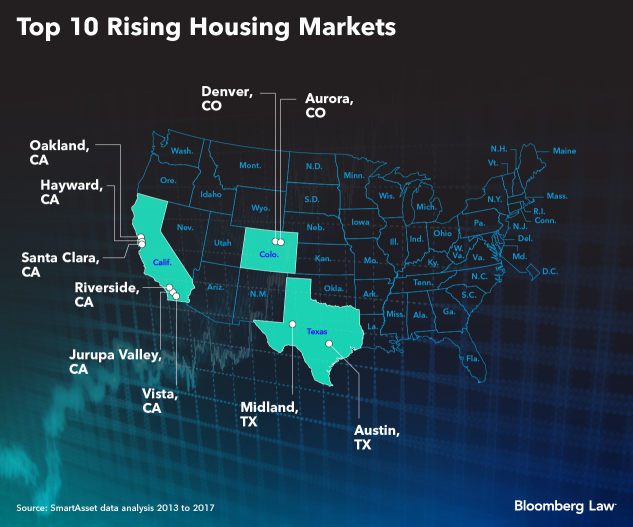 Rather than offer housing benefits or subsidies to workers, Facebook, Google, and Microsoft have decided to influence changes in local policy to create more affordable housing.

Google in December 2017 was approved along with other developers to build 10,000 new homes, apartments, and retail near its campus in Mountain View, Calif. Developers still are in a holding pattern as the city decides how to move forward with a master plan for the area. The company is making moves to do the same in Sunnyvale, Calif., by building housing and retail mixed use communities.

Microsoft announced in January it would invest $225 million at lower than market rate returns to subsidize the preservation and construction of middle-income housing. These investments initially will be made in six cities east of Seattle and Lake Washington: Bellevue, Kirkland, Redmond, Issaquah, Renton, and Sammamish.

Facebook is working with Partnership for the Bay Area’s Future—a collaborative regional advocacy effort to address affordable housing and income inequality—to create an investment fund to preserve existing affordable homes, build more housing for people who are struggling to keep up with high housing costs, and help middle-income workers with housing costs.

“I think it’s a positive sign that the business community writ-large is thinking more about the policy implications in their backyard,” Jenny Schuetz, a fellow in the Metropolitan Policy Program at the Brookings Institution who specializes in housing policy, told Bloomberg Law. “For a long time they just threw more money at employees, and best case that only means the highly paid employees do better, but not the region overall.”

Local advocates for affordable housing say tech companies are a main cause of soaring housing prices.

Between 2009 and 2015, inflation-adjusted average rent for an apartment in San Jose, the heart of Silicon Valley, jumped by 32.2% while adjusted median incomes for renters declined 2.8%, Silicon Valley Rising, a pro-worker campaign, said in a report. “This has forced families to cram together in small apartments, move away to cheaper places, make unhealthy trade-offs between rent and other essentials like food and prescriptions, or sleep on the streets.”

Donald S. Falk, CEO of the Tenderloin Neighborhood Development Corp., which builds housing communities for low-income people in San Francisco, said companies have an obligation to share the wealth they generate.

“Employment, tax revenues, an increased standard of living—increased investment can bring all those things. But if it’s not equitably distributed then it’s morally and economically problematic,” he said. “Income inequality is not only the defining issue of our era, it’s destructive.”

The policy influencing strategy that has emerged in the Bay Area and Seattle may not work in other cities facing similar challenges, Schuetz said. The tech sector in the Pacific Northwest have the ability to coordinate because leaders are connected. In New York City or Washington, D.C., where housing cost pressures are expected to mount with the arrival of Amazon.com’s second headquarters, there aren’t similar prevailing sectors or giant companies to take this on in a similar fashion, she said.

If there are some positive results in Seattle and the Bay Area, however, Schuetz expects other cities and companies would follow suit.

—With contributions from Paul Shukovsky in Seattle