The clock is ticking for workers at a coal-fired power plant in southern Ohio as two facilities that employ hundreds will close at the end of May.

The plants, run by AES Generation Ohio, employ almost 400 workers and fuel much of Adams County, Ohio’s tax base. The Utility Workers Union of America and the community are hoping someone will buy the facility, but that’s unlikely, sources said.

What’s happening in Adams County is not an anomaly. Shutdowns are occurring across the country in the coal and nuclear sectors as operating costs rise and revenue is reduced, companies said.

Starting in 2019, the UWUA is expecting the first of three nuclear plants owned by Entergy and one by First Energy to begin shutting down. Combined with the two coal plants in Ohio, more than 2,000 Utility Workers members will lose their jobs.

The effect of these closings spreads beyond the union, as other small towns—in New York, Pennsylvania, Michigan, and Massachusetts—will go without a major employer and tax-base contributor.

“What’s always underestimated every time is the social and cultural ties that bind these people not only to these workplaces, but the communities where these workplaces are,” Lee Anderson, government affairs director for the UWUA, said. “They work at the power plant because that’s where they’ve lived their whole lives, they’re the best jobs in town, and their families worked there.”

The two nearly 3,000-megawatt coal-fired plants in Ohio are the J.M. Stuart Station in Aberdeen and the Killen Station in Wrightsville. AES announced last year that it would close the facilities by May 31, 2018.

“Without significant changes in market conditions, it was determined both the J.M. Stuart Station and Killen Station wouldn’t be economically viable beyond mid-2018,” an AES spokeswoman said.

The economic impact of these closings cannot be stressed enough, community leaders and union officials said. Some of the revenue losses are expected to be anywhere from 30 percent to 50 percent for those towns.

The expected loss of the 370 jobs in Adams County will have a domino effect, said Gilbert Michaud, an Ohio University assistant professor who researches energy policy. Michaud and colleague Jason Jolley, an associate professor of rural economic development, are working on a report that maps out the shutdown’s impact.

Adams County and surrounding areas could see an economic loss of more than $500 million. That same impact is likely to happen in other areas when the nuclear plants close, Michaud said. Local businesses will lose 20 to 40 jobs each in industries like coal extraction, restaurants, technical services, maintenance and repair, construction, transportation, real estate, and hospitals.

“It leaves a thermal nuclear crater in the local economy,” John Melia, a spokesman for UWUA Local 1-2 in New York, said. The loss of local tax revenue hurts schools, police departments, and other emergency responders, he said.

The UWUA is also expecting its member rolls to take a hit over the next 15 years.

“Organizing other union members into the union as hundreds of thousands of people exit because of facilities closing means we’re running in place,” Anderson said. “It’s much harder to grow the union. We have great organizers and they’re the hardest workers. To think all of that effort is going to be staying in place, is disheartening.”

Job opportunities exist in the fast-growing sector of renewable energy, like solar and wind farms, as environmentalists point out whenever coal and nuclear plants close. But the UWUA says these jobs, while an opportunity for some members, don’t offer the same scale of employment or the same rate of pay to which workers are accustomed.

Entergy-run nuclear plants in Plymouth, Mass., Buchanan, N.Y., and Covert Township, Mich., are set for staggered closures from 2019-2022. Plymouth, home to the Pilgrim plant, is the largest of the three towns. It has a population of more than 56,400, according to Census data. Buchanan, with the Indian Point plant, and Covert Township, which has the Palisades plant, each have fewer than 3,000 residents. 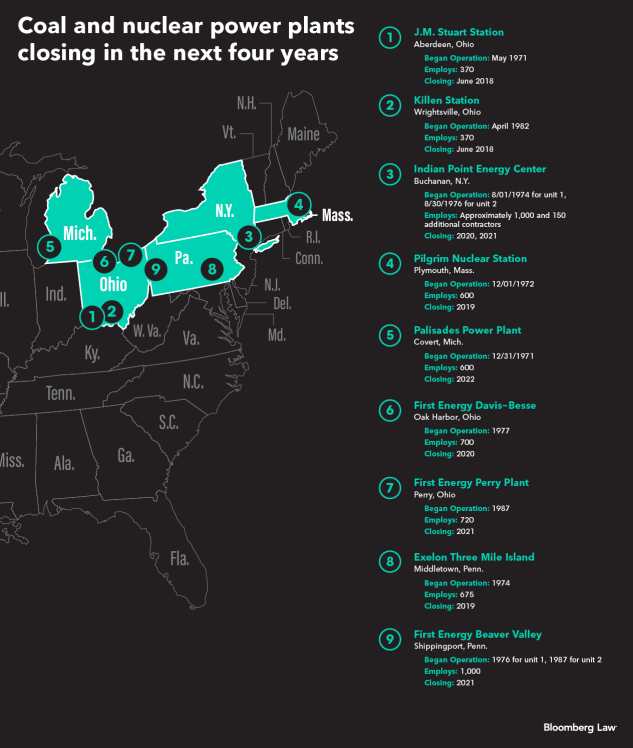 Those are not the only plants closing in the next few years. First Energy will close three plants by 2021: the Perry Nuclear Power Plant in Perry, Ohio, the Davis-Besse plant in Oak Harbor, Ohio, and the Beaver Valley plant in Shippingport, Pa. Exelon plans to close its Three Mile Island plant by 2019. All of the companies blame financial difficulty in the market.

The Nuclear Energy Institute points to the cheaper costs of natural gas as the reason for nuclear power’s struggle, Matt Crozat, the institute’s senior director for policy development, said. When natural gas was more expensive years ago, nuclear power was the more attractive option, he said. Renewable options, like wind and solar, have also taken a bigger piece of the market, adding more competition to the energy industry.

Not Leaving High and Dry

AES said it “recognizes the extent of the impact” of retiring the Ohio coal plants, so it’s managing transitions and contributing $2 million for the purpose of workforce development and job retraining in Adams County.

Entergy said it will provide assistance for workers who want to relocate to a new plant.

“We will be transparent and realistic with our employees about the process we are going through and give them as much clarity as we can about how it will impact them,” a spokeswoman said.

The Ohio plants continue to be profitable and are in compliance with Environmental Protection Agency regulations, so the union is looking for a buyer, Anderson said.

“But we hadn’t found hard-and-fast takers,” he said.

AES said that parties have inquired about the space since the shutdown was announced. “All options will be considered,” a spokeswoman said but wouldn’t elaborate.

What’s Next for Nuclear Plants?

When a power company decides to close a nuclear plant permanently, it must begin the decommissioning process within 60 years, according to the U.S. Nuclear Regulatory Commission.

Options for closing the plants include a process called SAFSTOR, which involves maintaining and monitoring the facility while the radioactivity decays. Years later, the plant is dismantled and the property decontaminated. New workers generally handle the dismantling process.

Under another option, called DECON, the plant is dismantled immediately after it stops operating. The union could have its members rehired to run that process. The UWUA and its locals are holding out hope that Entergy chooses the DECON option.

Entergy is in the preliminary stages of decommission planning for its three plants, and it’s “too early in the process to speculate on staffing levels for decommissioning,” a spokeswoman said. “It is also premature to address the question about what will happen to the sites after decommissioning.”

To contact the reporter on this story: Jaclyn Diaz in Washington at jdiaz@bloomberglaw.com