begins reopening its Florida theme parks on Saturday, ending a four-month shutdown at one of the world’s most-popular tourist attractions.

Guests will be able to ride to parks on the new Disney Skyliner -- though just one family per gondola, please. At Epcot, they can check out the recently installed Remy topiary, while enjoying the International Food & Wine festival at tables socially distanced throughout the park. Masks are required, and there’s glass separating people in line at the Seven Dwarfs Mine Train. If anyone has a fever over 100.4 degrees, their whole party will be turned away. 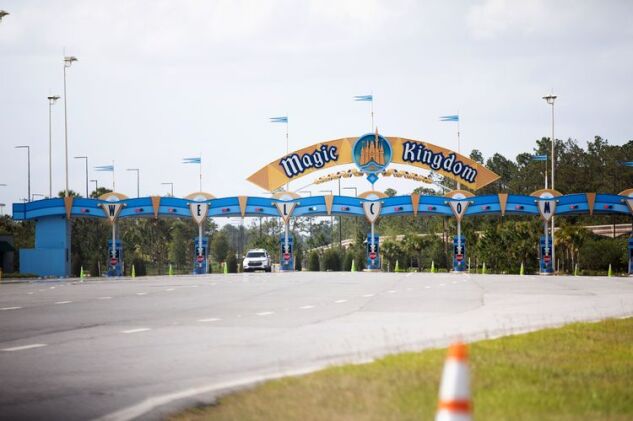 Closed gates at the Magic Kingdom theme park in Orlando, Florida, on May 15.
Photographer: Charlotte Kesl/Bloomberg

Yet across the country at Disneyland in Anaheim, California, no guests are coming through the gates. Although the Downtown Disney shopping and dining area there reopened Thursday, the world’s largest entertainment company has postponed the planned return of its two California theme parks indefinitely, citing issues with its unions and the time required to get approvals from the government.

The tale of the two Disneys highlights the differing strategies of the states, both of which have seen a surge in new coronavirus cases since reopening their economies. “This truly is a story of contrasts,” said Jessica Levinson, director of the Public Service Institute at ’s law school in Los Angeles.

In Florida, Governor , a first-term Republican, said he’s less concerned about outbreaks in theme parks than he is at private parties, where safety standards aren’t enforced. ’s Universal Studios, he said at a July 6 press conference, has taken precautions. It’s been open a month already, along with ’s parks and Legoland. DeSantis said he’s reviewed Disney’s reopening plan and found it “very, very thorough.”

In California, Governor , a Democrat also in his first term, applauded Disney’s delay when the company announced it last month. Through a spokesman, the governor said he “appreciates Disney’s responsiveness to his concerns.” At a press conference later, he added: “That’s an example of data-informed decision making.”

Newsom’s approval ratings, when last surveyed in May by the Public Policy Institute of California, were the highest they have been since his election. DeSantis’s ratings have slid over the past two months, according to a June Fox News poll, which found more residents critical of his performance. 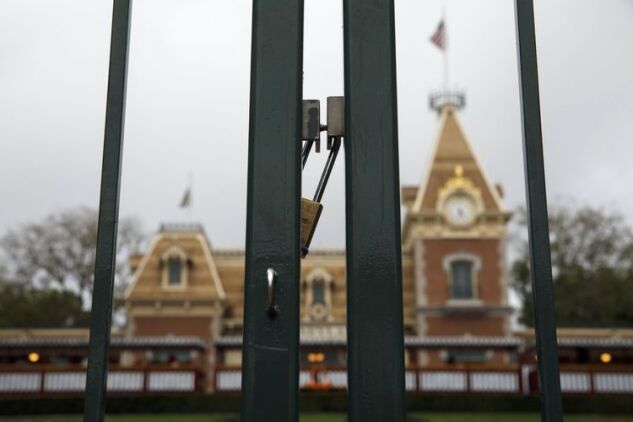 A locked gate at the main entrance of Disneyland in Anaheim, California, on March 13.
Photographer: Patrick T. Fallon/Bloomberg

“You could argue Disney is more economically important in Florida,” said , executive director of the Pat Brown Institute for Public Affairs at California State University, Los Angeles. “It’s this major economic force that the state wants to keep open.”

In another twist, Disney unions in Florida have largely accepted reopening after winning some concessions from the company, such as pay for employees who become ill or need to be quarantined, according to Paul Cox, president of the International Alliance of Theatrical Stage Employees, Local 631. Mask wearing is being enforced in the parks, he said, a sharp contrast to other parts of the state.

“I feel safer here than I do going to the grocery store right now,” Cox said in a call from Disney World.

One exception: Disney World’s actors, who say close contact on stage makes them particularly vulnerable. They’re asking the company to perform Covid-19 tests on workers, something Disney has resisted, citing the inaccuracy of results. The union Thursday said it filed a grievance against the company, saying Disney is retaliating against the actors by not letting them work.

It’s a different story in Anaheim, where one of Disney’s largest unions, Unite Here, which represents hotel workers, continues to call for stricter safety standards before reopening. Unite Here is among eight unions that wrote a letter to Newsom in mid-June saying they didn’t think the parks should reopen yet. The decision to delay came soon after.

Only time will tell which approach is the best. In a statement this week, Disney, which has already reopened its theme parks in Shanghai and Hong Kong, outlined the many precautions it is taking in Florida.

Guests coming to Orlando and the Magic Kingdom park -- which alone drew 20 million visitors in 2018 -- will have a very different experience, according to Banks Lee, a reporter for Attractions Magazine who got an early peek at the park this week as a guest of a Disney employee.

Lee loved the three relaxation zones that Disney set up in the park, allowing guest to remove their masks and cool off at a social distance. “In Florida, you do find yourself sweating more under the masks,” he said.

In another nod to Covid-19 caution, Disney canceled parades, where people gather, as well as meet-and-greets with characters, since fans get too close to employees.

Instead, the company came up with what it’s calling cavalcades, unscheduled appearances by Disney characters, riding in floats and waving at guests.

“It’s a nice way Disney can get the characters out there, but not gather a crowd,” Lee said.