The U.S. aviation industry is inching closer to a massive strike of the workers that keep planes stocked with food and water.

UNITE HERE—which solely represents 11,000 airline catering workers at LSG Sky Chefs—asked a government agency July 26 for formal approval to be released from mediation. If approved, the union would be allowed to strike.

More than 25,000 catering employees may eventually go on strike. UNITE HERE also represents employees at caterer Gate Gourmet as part of a joint national contract with the Teamsters and the Retail, Wholesale and Department Store Union. No filing for request of release from mediation has yet been filed for that contract.

The catering workers supply , , , and a handful of other carriers with onboard food and drinks. A strike could lead to flight delays or routes that lack meal and beverage service.

The National Mediation Board—the federal agency that oversees labor relations in the aviation sector—now must determine whether negotiations between UNITE HERE and LSG Sky Chefs are at an impasse. If not, negotiations must continue.

Labor leaders want to put pressure on airlines to allocate more money in their catering contracts that would go toward better pay and benefits for catering workers, some of whom make less than $10 an hour and pay hundreds of dollars a month for health insurance.

The unions have promised a coordinated strike campaign if they get government approval. Thousands of catering employees overwhelmingly voted to give their union strike authority in a series of nationwide votes that began in June.

“This is a crisis—a crisis of poverty wages and absolutely unaffordable health care,” UNITE HERE Local 23 President Marlene Patrick-Cooper said at a worker rally at Washington’s Reagan National Airport July 23. “And it’s absolutely unacceptable that an industry like the airlines making billions of dollars in profit would turn their backs on this group of workers.” 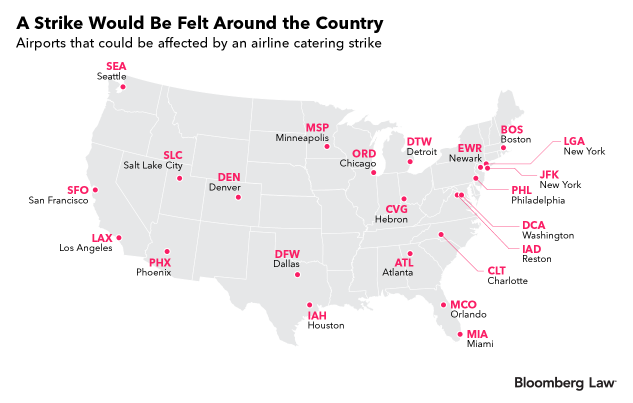 A spokesperson for LSG Sky Chefs said the company has been engaged in good faith negotiations with UNITE HERE since October 2018 but that the union’s demands are unobtainable.

“The stumbling block to success is the union’s demands for added wages and benefits that more than double our total cost of labor,” the spokesperson said. “While we have proposed increases in wages as well as other benefits, our company could not possibly meet the union’s demands and remain in business.”

The company said that it would continue to negotiate in good faith and hopes to reach an agreement.

A federal mediator was brought in to aid negotiations in May and continues to work with both parties.

Approval Could Be Tough

It’s uncertain how the NMB will rule on UNITE HERE’s request. One of the most important factors in the decision will be whether the mediator assigned to negotiations believes that the unions and catering companies have reached an impasse.

If there’s still hope that negotiations can be productive, the union is unlikely to be released from its contract.

Airline workers are prohibited from engaging in strikes and other work actions unless approved by the government. That differs from other industries where it’s up to the union when to call a strike.

Strikes are rare and hard to get to in the airline industry, Memphis-based attorney of Ogletree Deakins told Bloomberg Law in June.

“The traditional strike—those things are very hard to get to and few and far between,” he said.

If the NMB does release the parties from their collective bargaining agreements, the decision would be followed by a 30-day cooling-off period. If no agreement was reached by then, the union could strike and the company could alter the terms of its contract.

It’s unclear how long the NMB will take to make a determination on the unions’ request for release. The agency didn’t immediately respond to a request for comment.

Gate Gourmet and LSG Sky Chefs might be the companies employing the majority of airline catering workers, but the unions are focusing on the airlines that subcontract with those companies.

Workers, politicians, and labor leaders focused their anger specifically on American Airlines at a recent rally July 23. Hundreds of workers picketed and yelled chants as they held signs addressing the company. “American: One Job Should Be Enough,” many of the signs said.

“American respects the right to free association and collective bargaining,” the company said in a statement.

But it also distanced itself from the dispute, saying that the “negotiations in question are between our vendor, their employees, and the union.” American said it anticipates no effect on its catering operations at this point but will continue to monitor the situation.

UNITE HERE said it plans to hold a massive rally against American Airlines in Dallas in mid-August. The company is headquartered in the Dallas-Fort Worth area.