said his responsible-investing firm, one of the industry’s oldest, will make a greater push to press companies to publicly disclose data on racial diversity and expects to see transparency within the next 12 to 18 months.

Just 4% of U.S. companies in the Russell 1000 Index disclose information that’s part of the Equal Employment Opportunity Commission’s annual survey where employees are categorized by race, ethnicity and gender, said Streur, chief executive officer of $21.3 billion Calvert Research and Management. The issue will be catapulted to the top of the list of shareholder resolutions in the 2021 proxy-voting season, he said. 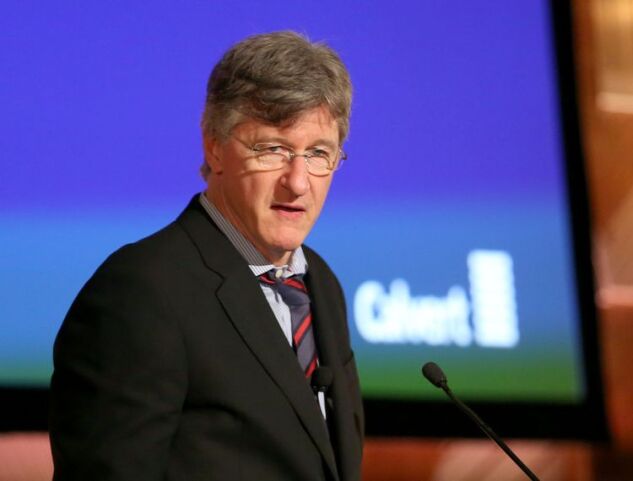 “We don’t have time to wait,” Streur said in a telephone interview. “All it takes is a few large companies to take the lead, and if managed well, there will be tremendous upside. Some companies are afraid because they know they won’t look great in disclosing the data. But the benefits will outweigh the costs.”

Major corporations have moved with to position their brands and messaging for America’s latest crisis over racism and police brutality. Since May 25, when the death of a black man, George Floyd, at the hands of a white police officer ignited protests across the U.S., all but a handful of the country’s 50 largest companies have responded publicly to the events.

Streur, who wrote in a blog post earlier this week that ending racism in America is a responsibility of corporations, said he has been struck by the comments from corporate chiefs in the wake of Floyd’s death.

“They used words that are not usually part of highly-vetted statements,” he said. “This is different. They went beyond the usual ‘we condone violence.”’

Streur said virtually every U.S. corporation is a laggard in providing information on race and that they should use their voice to effect change much like how they did on gun control, citing , Kroger Co. and Dick’s Sporting Goods Inc.

The technology industry, which has gone through a reckoning of its own, could be an early mover, he said, adding that the finance industry is behind. He declined to identify companies.

The EEOC, which enforces federal workplace anti-discrimination laws, aggregates workforce diversity data through an annual survey known as the EEO-1 that corporations are legally required to complete.

Since 2015, Trillium has filed 36 shareholder proposals asking companies to disclose their EEO-1 reports and provide details of any diversity and inclusion policies and practices, according to , director of shareholder advocacy at the Boston-based firm. He said its 2017 recommendation at received 50.9% of the votes.

“This was the first majority vote ever for a proposal of this kind and marked a significant increase in shareholder support for workforce diversity data,” Kron said in an email, adding that insurer Travelers Cos. started disclosing EEO-1 data after a majority vote and nearly four years of engagement.

Investors such as , director of ESG shareowner engagement at Boston Trust Walden, which manages more than $9 billion, say they will strive to ensure that corporate disclosures on racial disparity extend beyond a mere box-checking exercise. There needs to be leadership at the CEO level, goals and objectives set, and compensation plans linked to progress on these issues, he said.

“Corporations have a significant role to play in addressing systemic racism,” Smith said. “They need to show concrete efforts in this public debate.”

In his blog post, Calvert’s Streur conceded that his firm and other environmental, social and governance investors haven’t done enough to take action in addressing human rights violations and drive change.

“It will be hard for companies to say they can’t do this.” Streur said. “The environment today is different from three months ago. Things need to change. It will be hard to turn back.”

Calvert was started in the mid-1970s and became known in the 1980s for its work opposing South Africa’s apartheid regime. It was bought by Boston-based four years ago.

(Adds comments from other investors starting in 10th paragraph.)

To contact Bloomberg News staff for this story:
in New York at skishan@bloomberg.net

To contact the editor responsible for this story:
at tquinson@bloomberg.net