What started as the worst-case scenario for U.S. unemployment is quickly becoming reality. Some economists now see the surging to 20% as soon as this month -- and there’s no guarantee it would stop there.

About 5.5 million people are to have filed for unemployment last week, in data due out Thursday. That would push the four-week total above 22 million, roughly one-in-eight of the workforce -- essentially wiping out all the job gains since the last recession. 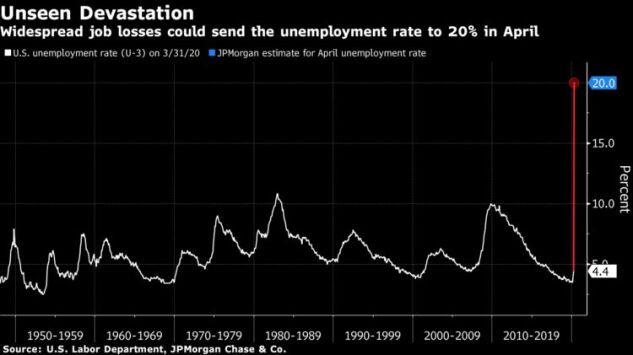 And jobless claims are expected to stay in the millions for several more weeks, as the impact of the coronavirus cascades through the economy. It all adds up to a worse recession than initially thought, and probably a more difficult recovery once the pandemic subsides.

Many people have been struggling for weeks to file for unemployment benefits via overwhelmed and websites. And while the government has rushed to help by authorizing trillions in stimulus, delays in getting the money to households and businesses -- as well as a possible shortage of -- could push the jobless rate higher or keep it elevated for longer.

“We don’t have the administrative systems to get $2.2 trillion into the economy in three weeks,” said , director of macroeconomic policy at the Washington Center for Equitable Growth. “What we have right now is a race between the virus wreaking havoc on the economy, and the relief trying to get out.”

If initial jobless claims don’t begin leveling off, a moves from “the realm of possibility” to “the most likely forecast,” said Sahm, a former Federal Reserve economist.

That would be triple the 10% seen in the wake of the global financial crisis and even above the roughly 25% seen during the Great Depression, though the methodology for that figure was different. The median estimate of economists in a earlier this month was for a second-quarter jobless rate of 12.6%.

The official unemployment rate only includes those actively looking for a job. That means that the 1.76 million in Americans outside the labor force in March -- the largest jump in seven decades of data covering people not actively looking for work -- isn’t reflected in the jobless rate. And those figures cover early March, before the vast majority of coronavirus-related layoffs. 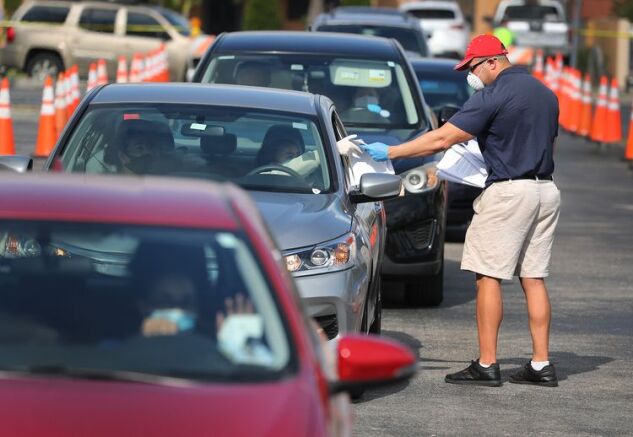 Historically, jobless claims also understate the number of people out of work. In 2018, only 26% of unemployed people who had worked in the last 12 months actually applied for benefit payments, according to the Bureau of Labor Statistics.

Uptake is likely to be higher now, however, given the unique circumstances of Covid-19.

“Oftentimes people didn’t take the unemployment insurance because there was an opportunity to find another job. That is not the case right now,” said , chief economist at Grant Thornton LLP. “People who never took unemployment before would take it in this environment because they have no choice.”

One possible bright spot in the data: Pennsylvania, which initially saw compared with other states, has begun to show a slower pace of claims, offering hope that other states may follow.

, chief U.S. economist at JPMorgan Chase & Co., said most of the layoffs in the U.S. have likely already occurred, noting how most of the stay-at-home orders went into place more than a week ago.

Initial jobless claims may stay elevated given the backlog, Feroli said. He forecasts an unemployment rate of 20% in April and holding around there in May, before sliding back down when people head back to work.

The figures may fluctuate, though. Swonk said government stimulus could pull workers back onto payrolls in May or June, but if financing from the program runs out, unemployment may jump again later in the year.

Also, the claims figures so far also likely don’t account for all of the gig workers and self-employed Americans who have suddenly lost their main source of income. While those workers aren’t reflected in the Labor Department’s payrolls figure -- which is derived from a survey of employers -- they play a role in the calculation of the unemployment rate, which comes from a separate survey of households.

Some states are just beginning to open applications for pandemic unemployment assistance, or the aid made available to the self-employed and those not typically eligible for unemployment benefits by the stimulus bill passed last month. Others may take weeks.

And it’s possible millions more job losses are in the pipeline for the coming months.

“There are people, there are businesses who are still hanging on that are going to lose their grip,” Sahm said.