The Trump administration is using coronavirus testing data from a volunteer tracking project led by journalists, according to a released by the White House, as one key government health agency significantly lags in counting how many people have been tested.

A widespread national testing program will be essential to lifting restrictions and reopening the country, experts say. But accurate figures on how many tests have been completed in the U.S. have been difficult to come by, making it hard to judge how prepared the nation is to get back to work.

The White House has been relying at least in part on data from the Covid Tracking Project, a volunteer effort to independently collect and track U.S. testing data led by Alexis Madrigal, a journalist at The Atlantic. The data is collected from public-health authorities via official reports as well as news conferences, Twitter and other sources.

The White House didn’t respond to questions about where they obtain data on testing.

The Centers for Disease Control and Prevention, which has a mandate to lead the on-the-ground response to outbreaks of disease in the U.S., pointed to its own website when asked about how closely it tracked testing and what data it has. The CDC website indicates that since March 1, the U.S. has completed nearly 3.2 million tests, and says the data “does not capture all tests performed in the United States.”

While the CDC website hasn’t been updated with tests data since April 24, the Covid Tracking Project shows 4.93 million tests up to that point, higher than the CDC’s tally by more than a million tests. As of Thursday, the project had counted more than 6 million tests.

While the White House has insisted for months that the U.S. has excelled at testing, it has often been difficult to gain a complete picture of national efforts. A document released Monday by the administration outlining a nationwide testing strategy contains a footnote crediting data on the number of tests performed to the journalist-led enterprise, without crediting any other sources of information on testing.

Use of the data is something of a surprise, given Trump’s frequent criticism of the news media, its coverage of the outbreak and of the U.S.’s testing capacity in particular. On Tuesday, Trump said on Twitter that they do “nothing but complain” about the U.S.’s testing performance.

The Covid Tracking Project documents in stark numeric detail the government’s failure to test for the disease, inhibiting efforts to contain it. The U.S. didn’t exceed 100,000 Americans tested for the disease until March 19, more than eight weeks after the first domestic case was reported.

The president frequently cites numbers of tests at press briefings, without giving a source. It’s possible the White House could be compiling its own counts from state, local and other sources, and relying in part on the Covid Tracking Project’s figures as one of several inputs.

While the White House didn’t respond to requests for comment on where the administration’s data are coming from, it roughly matches up with what the Covid Tracking Project has reported.

The Health and Human Services Department, of which the CDC is a part, said that it pulled testing data from various state, local and health-care sources. “There are of course additional data sets being collected. As it relates to the data reporting on the presentation you reference, we would refer you to the White House,” said a spokeswoman for the department. 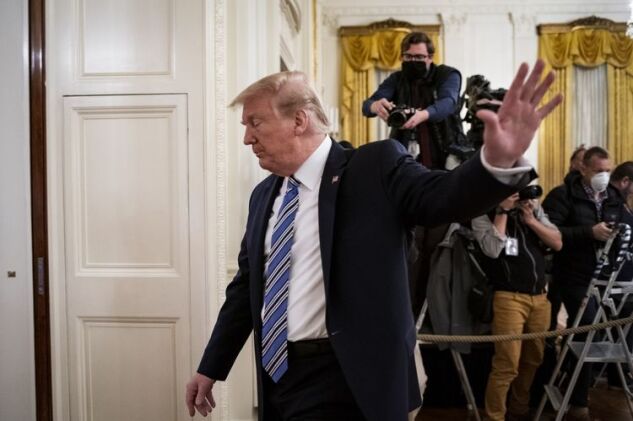 Donald Trump after speaking in the White House on April 28.
Photographer: Al Drago/Bloomberg

Madrigal declined to comment on whether the government was using the project’s data.

“I hope all levels of government are using every available data source to try to get their hands around the problem, both internal to government and outside of it,” he said Tuesday.

The CDC said that it was working on getting more data of its own to add.

“We’re working on consolidating the different data streams for testing numbers and hope to have that data on the website soon,” said a CDC spokesperson. The agency declined to comment on where the White House was getting its testing information.

Many nations, including those praised for their response to the pandemic such as South Korea and Iceland, publish comprehensive testing data. So do some U.S. states.

“I would pray that in any future pandemic one of the first things a federal government would do is develop an information flow that goes from cities to states to the federal government over an 18 hour window so you have consistent information,” said Howard Forman, director of the health-care management program in the Yale School of Public Health, in an interview earlier this month.

Forman said other countries have done a better job than the U.S. of making testing data available. Other nations have also made public figures such as their numbers on hospitalizations and ICU bed usage.

In the U.S., much of that data is left to the states to disclose. Even states that frequently publish such data collect the testing data from myriad sources, and those sources do not all record or report data with the same level of standardization or diligence. A massive backlog of “pending” test results in , for example, turned out to be due in large part to many labs simply not reporting negative results to the state. Once those labs changed their reporting, a backlog of 59,000 pending tests shrank to 15,000 overnight.

Although testing has ramped up significantly in recent days, the U.S. is still short of the minimum 500,000 daily tests experts feel the country will need to process daily in order to consider reopening. The data cited by the White House shows that on the most active day, the country was processing just over 300,000 tests. Most days, the number was far below that.

(Updates with HHS response in the 12th paragraph)

To contact the authors of this story:
in San Francisco at kbrown340@bloomberg.net