, a highly transmissible variant of the coronavirus that causes Covid-19, has spread around the world in a matter of weeks since it was first identified in southern Africa. With its large number of mutations, the strain has scientists racing to determine its transmissibility, how likely it is to cause severe illness and whether it can evade vaccines.

1. What’s different about this variant?

The omicron variant is characterized by some 30 or more changesin the spike protein, half of which are in the area that binds to the enzyme that the virus targets to enter cells and cause an infection. Mutations there can make the pathogen less recognizable to the antibodies made in response to vaccination or a case of Covid, increasing the risk of either a breakthrough infection or reinfection. At least three mutations are associated with helping the virus escape detection from antibodies and another appears to increase its ability to gain entry to human cells, making it more transmissible. 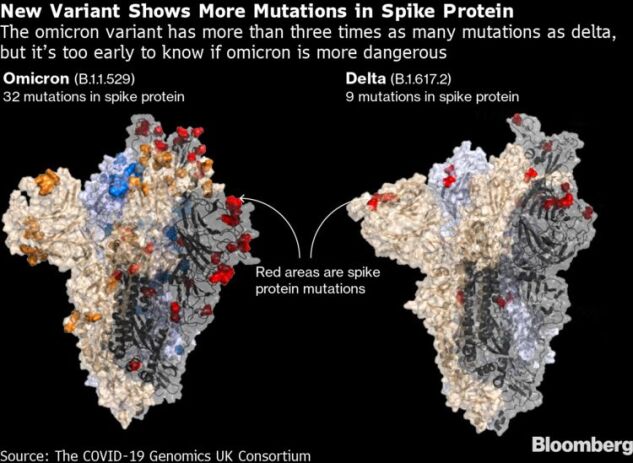 Scientists have focused on Africa as a potential source, but it’s not yet certain exactly where or how the variant originated. It was first identified from testing done Nov. 9 in Botswana on travelers from West Africa, according to authorities in Nigeria. It was reported to the World Health Organization on Nov. 24 after cases were identified among young, unvaccinated people in South Africa. Researchers in the Netherlands detected the variant in patient specimens collected Nov. 19 to 23, but it wasn’t immediately clear whether those people had visited southern Africa. A scientist at the UCL Genetics Institute in London said omicron likely evolved during a chronic infection of an immuno-compromised person, possibly in an untreated HIV/AIDS patient. The beta variant, a mutation identified last year in South Africa, also may have come from an HIV-infected person.

3. How infectious is it?

U.K. data show an increased probability that someone with an omicron infection will spread it, with faster growth rates than what is seen with delta, the variant that became the dominant strain worldwide in mid-2021. Omicron infects up to faster than earlier strains, according to researchers at the University of Hong Kong. In the U.S., it made up 73% of all sequenced coronavirus cases the week ending Dec. 18, rising from less than 1% just two weeks earlier. The WHO has said that omicron is likely to out-compete delta in places where it spreads in the community. It was confirmedin 106 countries as of Dec. 21, according to the WHO.

The jury is still out. The WHO said in its Dec. 21 report that the data on that point remained limited. Preliminary results from two studies in the U.K. suggested a of hospitalization from omicron when compared with earlier strains, echoing findings from another study by the National Institute for Communicable Diseases in South Africa. Some physicians there earlier had described cases as with relatively few requiring . Yet public health experts say those reports need to be interpreted with caution because many occurred in young people with no significant risk factors, and many had been vaccinated or previously infected. Both hospitalizations and deaths increased significantly in South Africa in the weeks after omicron took hold, even as new . Omicron’s high transmissibility means that, even if a smaller fraction of those infected become severely ill, it will still cause a lot more people to become very sick. 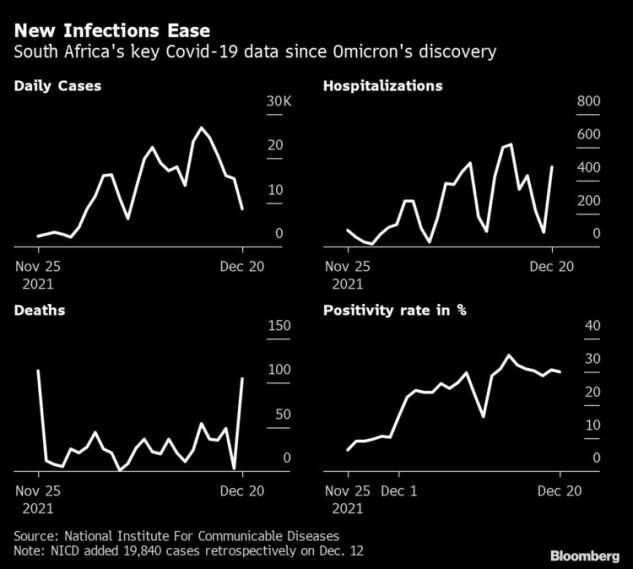 5. Do vaccines work against it?

Lab experiments indicate omicron can evade immunity from natural infection and vaccines more than other variants, and results in a substantial reduction in the production of neutralizing antibodies in the blood -- a key indicator of protection against illness. Still, the findings suggest protection conferred by existing Covid vaccines won’t be totally wiped out. and said initial lab tests showed a of their vaccine may be needed to neutralize the omicron variant. said a third dose of its vaccine against omicron, results the company described as reassuring. The Imperial College London team estimated that having two doses of the Pfizer-BioNTech vaccine or the one from reduces the odds of getting a symptomatic omicron infection by about 20% -- about the same (19%) as having previously had Covid. Adding a booster dose helped dramatically, improving the efficacy of the vaccines against omicron to 55% to 80%. Immune protection against omicron isn’t just tied to antibodies. capable of destroying virus-infected cells are linked to preventing severe disease, hospitalizations and deaths. So far, SARS-CoV-2 variants have had only minimal influence on the T cell response.

6. What treatments will work?

Steroids and medications known as IL6 receptor blockers, which can suppress a harmful overreaction of the immune system, will still be effective for managing patients with severe Covid, according to the WHO. Other treatments are being to see how they perform against omicron. and Pfizer, makers of new antiviral pills to combat Covid, have said they expect their products to stand up to the new variant. said the same of its antiviral infusion remdesivir. Of greater concern are treatments based on antibodies because they target the spike protein that is so mutated in the omicron variant. The U.S. Centers for Disease Control and Prevention said some antibody therapies may not be as effective against infection with omicron. said Dec. 16 that its antibody treatment, REGEN-COV, has “diminished potency” versus omicron.

(Updates with new studies in section 4)

To contact the reporters on this story:
in Melbourne at j.gale@bloomberg.net;
in Hong Kong at mcortez@bloomberg.net