The cost of Covid-19 tests vary widely, from roughly $50 to more than $500 in many cases, causing some Americans to avoid getting tested out of fear they’ll face a high bill in a time of economic pain.

Covid-19 tests are supposed to be free for anyone who has insurance, but unexpected bills from doctors’ offices and hospitals remain a big concern, researchers say. Employers who want to prevent outbreaks among their employees are increasingly paying for tests, and some say those expenses are only growing.

How much the test costs depends on who offers it, as hospitals, laboratories, and doctors’ offices all set their own prices. The same test one clinic charges $50 to perform could cost $5,000 at a hospital, researchers who study billing practices say.

“It seems to us to be totally and completely random what they charge,” said Gerard Anderson, a professor of health policy at Johns Hopkins University who is studying hundreds of hospital charges for Covid-19 tests.

Increasing the number of Covid-19 tests is key to containing the spread of the coronavirus and keeping businesses open until a vaccine for virus is developed and distributed widely, public health officials have said. Almost 1.2 Americans applied for unemployment benefits last week as a large portion of the U.S. economy still struggles with the virus.

For one of the most common Covid-19-related tests, the swab-in-the-nose that can take days to see results, health-care providers charge on average $63 and facilities collect on average $372, insurance claims data from the nonprofit FAIR Health show. Hospitals and health systems are generally charging more than doctors’ offices, Anderson said.

Large hospitals charge between $20 to $850 for a single test, an analysis by the Kaiser Family Foundation found. Anderson said he saw a single charge from a Texas hospital for $5,000 for a Covid-19 test. 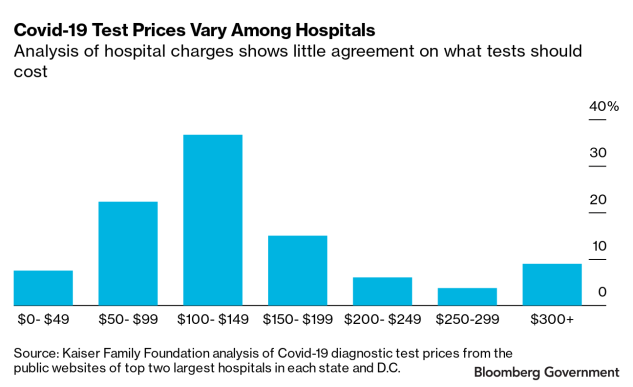 There’s been as many as 900,000 new Covid-19 tests performed in a single day in the U.S., although in recent weeks that figure has dipped below 800,000 new tests per day, according to Bloomberg News data. Some public health experts have suggested the U.S. needs to perform as many as 3 million tests per day in order to contain the virus.

Public and private insurers are required by the Families First Coronavirus Response Act () to cover Covid-19 tests with no cost to the patient. The federal government also has been giving health-care providers funds for providing free tests to the uninsured, although there’s no requirement that the uninsured get free tests.

This guaranteed “first dollar coverage” means most people have no reason to compare prices, because the cost doesn’t directly affect them, Shawn Gremminger, health policy director for the Pacific Business Group on Health, said. It also means those offering the tests can charge any price, he said.

The varying price in health care generally and for Covid tests creates concern that seeking care could come with unexpected costs, Anderson said. Researchers are concerned that Black and Latino communities, which have been disproportionately hit by the virus, may be particularly wary of the costs associated with Covid-19 care and will avoid getting tested, he said.

Covid-19 testing and care costs are a concern for 40% of adults, according to a Gallup poll of more than 1,000 people. Nonwhite Americans and those earning less than $40,000 per year were much more likely to say they’re concerned about the costs.

Employers and insurers bearing the cost of testing warn the bills are mounting as Covid-19 cases climb in the U.S.

Nursing homes that must regularly test their employees to ensure the virus doesn’t spread to their residents face increasingly unmanageable costs, the groups warn. To test all 2.9 million residents and staff at the more than 15,000 nursing homes as well as the more than 1.4 million people living and working in assisted living facilities in the U.S. just one time would cost $672 million, according to an analysis by the industry that assumed the tests cost on average $150.

Some industries say they’re covering their employees’ tests but worry about how the costs are adding up as the virus spreads through the summer.

In California, builders and contractors were deemed essential businesses and allowed to continue operating even as Covid-19 cases were growing rapidly earlier in the year. Some companies tested their employees whenever one of them was potentially exposed to the virus and occasionally wound up paying add-on fees for on-site testing or high prices for the tests, Michele Daugherty , president and CEO, Associated Builders and Contractors Northern California, said.

An outbreak among workers can cripple a contracting company, which employs skilled workers who aren’t easily replaced, and the industry is worried that if they can’t keep the virus at bay the state will stop allowing them to work, Daugherty said. The cost of the tests so far is easier to take on than losing weeks or months of work, she said.

“We look at it as our responsibility,” she said. “That right to work as an essential business could be taken away if there’s an abundance of outbreaks in our industry.”

Daugherty said her organization started setting up testing for construction companies in northern California to help them navigate this uncertain landscape. The group works with PMH Laboratory Inc. to set up tests that cost $125 each, she said.

However, the costs add up, Daugherty said, especially for employers who don’t offer health insurance and would have to shoulder that cost directly. There’s also a concern insurers are going to raise premiums on employer plans next year to offset the testing costs, she said.

The cost per-worker for weekly Covid-19 tests, if employers paid the same rate as Medicare, which pays less than average, is about $5,200 a year, according to an analysisby researchers at Georgetown University. That’s almost the same cost employers pay to give an employee health insurance: the average employer-based insurance premium for single coverage was $7,188 in 2019.