The Trump administration has highlighted an apparent disconnect between rising cases and declining mortality as proof the Covid-19 pandemic is under control.

“Fatalities are declining all across the country,” Vice President said at a coronavirus task-force briefing in Washington on Friday. He called the rise in new cases in people under 35 “very encouraging news,” saying they aren’t as likely to die from Covid-19.

However, the mismatch appears to be more an anomaly caused by quirks in how deaths data is collected and reported, along with a greater number of younger people catching the contagion, than a sign the coronavirus is becoming less lethal or easier to treat.

Nationally, the death toll is rising by around 600 to 700 a day, even as record numbers of new cases were diagnosed this week. That’s far below the height of the pandemic when more than 2,500 deaths were reported some days. Medical experts say it’s too soon to know for sure that deaths are still declining.

That disparity has health experts and the public asking questions: Is it because those getting sick now are younger than those who fell ill in March and April? Are we getting smarter about the use of ventilators? Are new drugs like Gilead Sciences Inc.'s remdesivir helping? Are cases milder because of warm weather?

“The uncertainty right now is as high as it has ever been since the very scary early days in mid-March,” said James Scott, a professor of data science at the University of Texas in Austin. He’s part of a University of Texas modeling team that predicts that deaths will tick up in July.

Complicating matters, there can be a weeks-long lag in many states between when someone dies and when that’s included in the daily reports. That means deaths could be on the rise days before states say they are.

It’s not just the fatality statistics that can’t be relied on completely: Basic information such as daily new Covid-19 related hospitalizations isn’t reported by many states, among other key data points that could help scientists predict which direction the death tolls are heading. 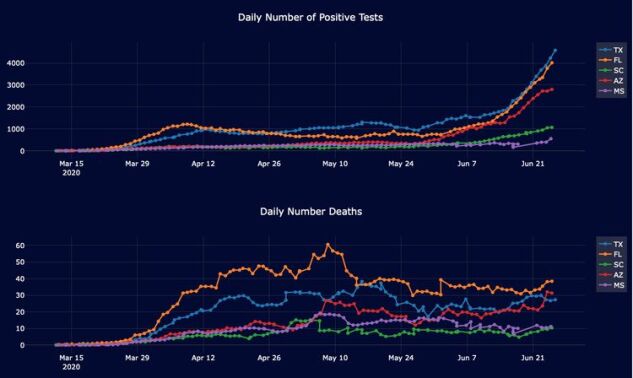 “We have a very heterogeneous pandemic experience right now -- different parts of the country and different states are experiencing very different things,” said Jeffrey Morris, director of the division of biostatistics at the University of Pennsylvania’s Perelman School of Medicine. “It is kind of a paradox.”

So while it’s too early to see what the recent surge’s death toll will be, if the exponential growth in cases continues unabated, increased deaths are all but inevitable.

“This particular part of the epidemic is just taking off, and we’re still on the runway,” said Thomas Giordano, chief of infectious diseases at Baylor College of Medicine in Houston. “The last thing to happen is the death. We just aren’t that far along with this one yet.”

Deaths are the ultimate lagging indicator, especially with Covid-19. It takes several weeks after a diagnosis for a patient to die. Then it takes more time, sometimes weeks, for doctors to fill out death certificates and health officials to adjudicate the deaths. Only then are they finally added to the official state tally.

“You can’t look at deaths as an indicator of where the outbreak is at this particular period of time,” said Amesh Adalja, a senior scholar at the Johns Hopkins Center for Health Security.

Waiting for data to roll in requires “patience that is hard to muster during a crisis,” said Joe Gerald, an associate professor of public health policy and management at the University of Arizona. But “if you want reliable, complete data, you have to wait for it, especially on deaths.”

In Arizona, the time between diagnosis and death from Covid-19 now is about 14 or 15 days, up from four or five days early in the pandemic. Then the state health department must verify the death, so there can be a three-plus week lag between a new case and a fatality being reported, Gerald said.

Half of the deaths reported for the week ending June 14 were more than a week old, so he expects it to take at least another week before he can reach any conclusions about the mortality rate for this surge. A modest bump could be expected with younger patients being hospitalized at a higher rate of hospitalization, Gerald said.

Roughly 80% of deaths have been people 65 and older, according to data from the U.S. Centers for Disease Control and Prevention. Less than 10% have been under 45. That’s led people like Pence to predict there won’t be many deaths as the virus is now infecting more younger adults.

In Florida, where reported cases shot up 7.8% Friday while deaths rose 1.2%, the median age of patients dropped to 37 in mid-June from over 60 in mid-March. Deaths have plateaued due to a “drastic shift in the age of people being infected,” said Jill Roberts, an associate professor at the University of South Florida College of Public Health who specializes in emerging diseases. “The healthy people who are less likely to suffer severe consequences are accounting for the majority of cases.”

She blamed it in part on the crowds at reopened bars. “Inside, where nobody is wearing masks, where people are maybe yelling or screaming over music, all those things create the perfect scenario” for viral spread.

On Friday, the state banned drinking alcohol in bars.

But if elderly people being more cautious and younger people less so drove down the average age of patients, it would generate fewer hospitalizations. So far, they’re rising in Florida, suggesting this isn’t the only thing going on.

The big danger is that as more younger people get infected, it will spread to the elderly. That’s especially true in Florida, where one in five residents are over 65. Did younger Floridians, with asymptomatic or pre-symptomatic cases, visit their parents or grandparents on Father’s Day and infect them?

“My biggest concern is what happens two weeks from now,” Roberts said. “Individuals who are seeing spiking cases right now, they could infect other people. And if they infect other people, we’re going to see hospitalizations and deaths follow.”

Better treatments could also explain the gap. Remdesivir, approved on an emergency basis in May, helps hospitalized patients recover about four days faster. One study suggests it may also lower the death rate. It’s now used in hospitals alongside convalescent plasma, a type of blood that’s collected from survivors that may contain virus-fighting antibodies. And just this month, the steroid dexamethasone was shown to keep those on ventilators alive in a trial led by the University of Oxford.

As doctors have learned more about the disease, they’ve discovered better strategies. Severely ill patients have been found to benefit from being prone on their side or stomach.

“We have learned best practices from around the world, and there’s been a real global sharing around areas that have faced this epidemic in large portions and what they’ve learned,” said Bill McKeon, president and chief executive officer of Houston-based Texas Medical Center, which has seen its intensive-care unit beds fill up as cases rise.

There’s also the possibility that cases may be getting milder, either due to changes in transmissibility in warmer weather, or changes in the virus itself. The warm weather theory holds that hot, humid temperatures cause viral particles to drop to the ground faster.

Most of the attention has focused on whether the heat will reduce the total number of cases. But a subtler effect of weather may be that many patients are initially infected with a lower dose of the virus, leading to less severe symptoms, says David Rubin, director of PolicyLab at the Children’s Hospital of Philadelphia.

Some researchers also think Covid-19 may be getting less potent as it replicates. The hypothesis has gained wide attention since it was put forth by Italian doctors a few weeks ago, but the claims are highly controversial.

The World Health Organization has disputed that the virus has mutated in any significant way.

To contact the authors of this story:
in New York at rlangreth@bloomberg.net

in New York at mcortez@bloomberg.net