High school senior Emma Burkey received her “one and done” coronavirus vaccine on March 20, and within two weeks was in an induced coma following seizures and clotting in her brain.

She’s making a slow recovery, having recently been transfered from the hospital to a rehabilitation center, and the first round of bills totaled $513,000. The 18-year-old’s family friends in the Las Vegas area started a GoFundMe account to help with medical expenses from the very rare vaccine reaction.

“We don’t know what’s going to happen with Emma, how long it will it take for her to return to a normal life,” said Bret Johnson, the family’s minister, who’s acting as spokesman for the Burkeys. He said the family believes her condition is linked to the vaccine but hasn’t yet been contacted by the company or U.S. health regulators, and that a connection hasn’t been independently confirmed.

Burkey’s family can’t look to J&J to cover the medical costs not picked up by her insurance because a 2005 law -- extended last year to include the Covid-19 pandemic -- shields manufacturers and health-care providers from state and federal liability in instances of public health and bioterrorism emergencies. In exchange for immunity for vaccine makers, the federal government pledged for adverse reactions to coronavirus treatments and vaccines, but it’s a program with a history of rejecting claims and a relatively high bar for recovering costs.

The Countermeasures Injury Compensation Program, run by an obscure office within the U.S. Health and Human Services Department, covers medical costs and lost wages not paid by insurance. Some 445 claims had been filed as of April 26 for adverse reactions to either vaccines or treatments, according to the Health Resources and Services Administration, which runs the program.

The Centers for Disease Control and Prevention said in a statement that the vaccines were “rigorously studied” before approval, and are “rigorously monitored now that they are being used by the public.” Of more than 240 million vaccines from three manufacturers that have been administered in the U.S., the CDC said there are currently no confirmed vaccine-related deaths, and that reports of allergic reactions are in line with those from vaccines for other conditions.

More than 8.1 million people have received the J&J shot and so far 17 -- including Burkey, her pastor said -- reported a rare type of blood clotting. Burkey’s case was one considered by health officials during a pause in distribution of the J&J shot, Johnson said. U.S. regulators said the vaccine is , and continue to investigate whether there’s a link between the shot and the rare blood-clot syndrome. 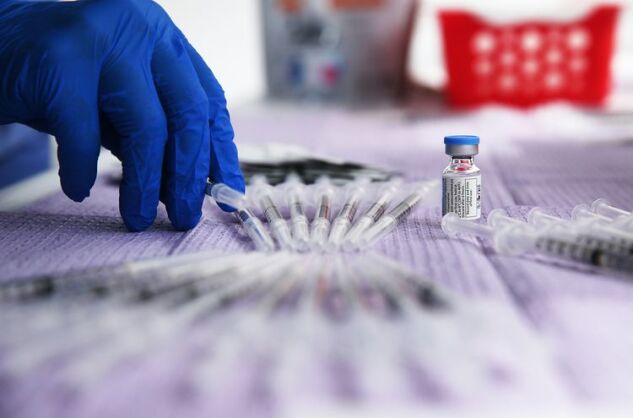 One-shot doses of the Johnson & Johnson Covid-19 vaccine are prepared at a clinic in Los Angeles on March 25.
Photographer: Mario Tama/Getty Images

J&J said it will “carefully review reports of adverse events in individuals receiving our medicines or vaccines,” but will not discuss individual cases out of privacy concerns. Adverse reactions are reported to the Food and Drug Administration and “we encourage patients to share their experiences as this information is critical in maintaining a high standard of product safety,” the company said.

Only about a quarter of the 445 Covid-related reactions reported to the countermeasure program so far are from vaccines, while more than half were from various treatments, according to HRSA. Those treatments include ventilators, convalescent plasma, and hydroxychloroquine -- the anti-malarial drug touted by former President that was found to have greater risks than benefits in treating coronavirus.

There were 50 deaths from alleged failure to provide sufficient care, according to the claims. Those types of claims would normally result in civil lawsuits, but under the law shielding vaccine makers and health-care workers, suits can only proceed if there’s “willful negligence,” a high bar in U.S. courts.

The compensation applications also include reports of death following ventilator use and other treatments, and a wide range of health issues after vaccination, including chest pain, facial spasms, paralysis, and even injuries like broken ankles. It will take time for researchers to determine if there’s “compelling” scientific evidence to link those injuries to the vaccines or treatments.

There have been no payouts so far in Covid cases, which the HRSA says is because it hasn’t received all the information needed. Required medical records still haven’t been received from the applicant in the first claim, which was filed in September over an adverse reaction to convalescent plasma, the agency said.

Critics say the countermeasures program isn’t the best way to handle the vaccine claims. The program has existed for a decade and, as of April 1, only found 39 of almost 500 claims eligible for compensation -- mostly for reactions to the H1N1 vaccine -- and paid out only about $6 million in 29 cases.

Instead, they say, compensation requests should go through a decades-old program within the same agency called the Vaccine Injury Compensation Program, also known as the “vaccine court.” It has a dedicated source of funding -- an excise tax on every vaccine administered in the U.S. -- but is limited to those shots routinely recommended for children and pregnant women, and those for the seasonal flu.

Anne Carrión Toale of Maglio Christopher & Toale in Sarasota, Florida, former president of the Vaccine Injured Petitioner’s Bar Association, said her office is “overwhelmed” with calls from people trying to figure out if various medical conditions are caused by the vaccines and if there’s any recourse.

“With the Covid vaccine in particular, a higher percentage of calls are reassurance-seeking and ‘I have questions’ than with a normal vaccine,” Toale said. She’s hoping Congress will move the Covid vaccine cases to the vaccine court, where there’s a greater chance of a payout and it also pays for “pain and suffering” and covers legal fees and expert witnesses.

An HRSA spokesman said that in order for Covid vaccine injuries to be covered by the vaccine court, they’d have to be CDC recommended for routine administration to children or pregnant women. “No Covid-19 vaccine currently meets these criteria,” the spokesman said in an email.

The U.S. government’s vaccine compensation program has its roots in the rise in lawsuits. Vaccines are designed to trigger the immune system into fighting off diseases. In rare instances, they can cause the system to go into hyperdrive, resulting in severe allergic reactions and even paralysis.

In the 1980s some manufacturers were threatening to pull out of the market because of lawsuits, so Congress decided that the social benefit to promote vaccination also meant an obligation to cover adverse reactions, and created the vaccine court.

A Trump-era regulation to exclude compensation for severe shoulder injuries and fainting -- which make up the bulk of claims -- was by the Biden administration, and Congress is considering doubling the number of special masters who hear cases.

If that happens, all of the countermeasures cases should be moved to the vaccine court, including ones not involving vaccines, said Peter Meyers, former director of George Washington University Law School’s Vaccine Injury Clinic.

“It can be a difficult scientific question,” Meyers said, referring to whether there’s a link between an adverse reaction and a treatment. “We’re never going to have, like the standard in criminal court, proof beyond a reasonable doubt. It can be a complicated question but it’s a doable question.”

The vaccine court has a list of adverse reactions known to sometimes be caused by a vaccine, making it easier for an application to get compensation without proving a direct link. It also has a lower burden of proof, requiring only that the vaccine was more likely than not to be the cause.

Emma Burkey, who works with children and has a part-time gig at a construction company, decided to get the coronavirus vaccine even though she wasn’t in a high-risk group.

About a week later she started to feel unwell, and 10 days after having the shot went to bed with a headache, and vomited. Her parents, Russ and Kathy Burkey, helped her to the bathroom, where “her face locked up, and head twisted,” Johnson, the family minister, said. “They could see in her eyes that something was very, very wrong.”

An ambulance took Burkey to the local southern Nevada hospital, where doctors realized her reactions were similar to others reported from the J&J shot. Emma was airlifted to a neural treatment unit at Loma Linda Hospital in San Bernardino, California.

The family is counting on most costs to be covered by insurance. They learned of the compensation program during a call from U.S. Senator ’s office. The Nevada Democrat’s staff have also contacted HHS and will monitor Burkey’s case “to ensure the family gets the support they deserve.”

If the first bill to the Burkeys is any indication, the cost of Emma’s medical care may run into the millions of dollars. Her insurance provider has already agreed to cover the long-term rehab she’ll need, Johnson said in an update on the GoFundMe page, which has raised about $48,000 so far.

“Right now it feels like the national debt,” Johnson said. “It’s so big you can’t get your head around it.”