Many U.S. states and cities have a growing surplus of Covid-19 vaccines, a sign that in some places demand is slowing before a large percentage of the population has been inoculated, according to an analysis by Bloomberg News.

The data indicate as many as one in three doses are unused in some states. Appointments for shots often go untaken, with few people signing up.

Bloomberg analyzed state and U.S. data from Monday, providing a snapshot of vaccine use before Johnson & Johnson shelved millions of shots pending federal health officials’ investigation into rare cases of blood clots. That pause will likely cause the number of unused shots to fluctuate, but will little change the comparisons of states.

Overall, demand remains strong. In the U.S., 37% of people have gotten at least one dose, and the country is one of the world leaders in vaccinations. But even some states that are doing well are struggling with stubborn pockets where uptake is low.

In Virginia, for instance, 83% of vaccines supplied to the state have been used — but the number of people getting shots differs sharply from city to city. That difference is especially stark in Charlottesville and Lynchburg, separated by a mere hour’s drive on U.S. 29 past vineyards and open farmland.

“Virginia is sort of a microcosm of the country,” said Costi Sifri, director of epidemiology at UVA Health in Charlottesville. “We’re going to have this same type of challenge played out in every state in the country. How do we close the vaccine gaps that are going to occur geographically?” 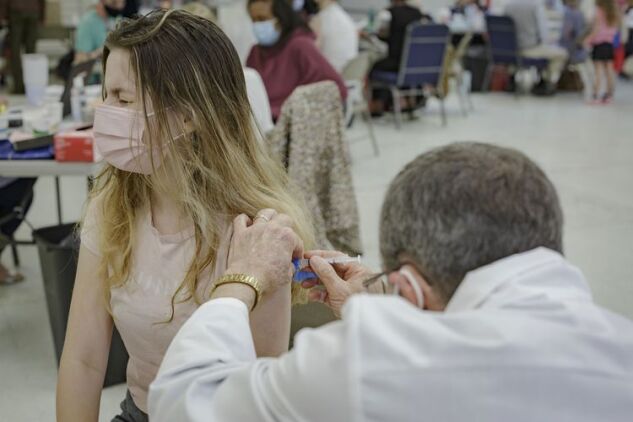 A healthcare worker administers a dose of a Covid-19 vaccine at the Lynchburg regional vaccine center.
Photographer: Carlos Bernate/Bloomberg

In Charlottesville, a mostly Democratic area that is home to the University of Virginia, vaccine appointments are tough to snag even with two mass clinics right in town. In Lynchburg, 70 miles south and dominated by conservative Liberty University, open appointments at an old TJ Maxx are easy to find. The disparity has led to in-state vaccine tourism where residents in northern Virginia flock south to snap up shots that would otherwise go unused. The wide availability of vaccines also signals that areas like Lynchburg may be running out of residents willing to get vaccinated.

The Bloomberg Vaccine Tracker shows the percentage of delivered doses that have been used in a state, based on Centers for Disease Control and Prevention data. In late February, with demand for vaccines high, only 19% of doses in the U.S. were unused, a sign that almost every dose delivered was being quickly injected into somebody’s arm. Bloomberg calculated rates of unused doses for this analysis using one-week averages, which are less volatile than day-over-day numbers. 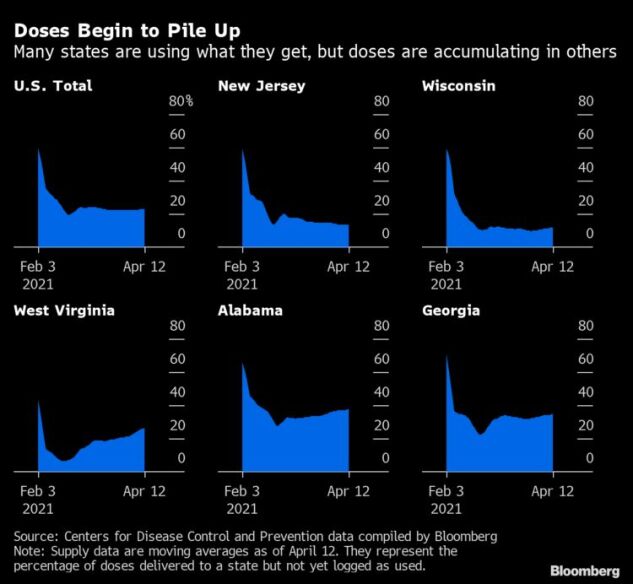 Now there are warning signs that vaccines are going unused. That’s a concern for epidemiologists who maintain that at least 75% of the nation’s population must be protected before the virus can be truly contained.

Federal officials are in the early stages of rethinking distribution. Vaccines have so far been doled out based on population.

“We’re going to go through stages, as we vaccinate higher and higher portions of populations, where it will make sense for us to continue to watch where vaccines are needed, how vaccines are distributed, the best way to reach more people,” Andy Slavitt, senior adviser for the White House’s Covid Response team, said at the end of March.

Meanwhile, doses pile up. West Virginia — lauded for its rollout of shots early on — has gone from using all but a tiny percentage of its supply in mid-February to 26% of doses unused, a daily average of 352,000 unused doses over the last week. Some states have never gotten their vaccination strategy in gear. Alabama, Georgia and Mississippi represent a band of southern states that have struggled to work through their supplies.

States don’t control all of the distribution inside their own borders. Mississippi says it has used 77% of the doses it has requested. But when the doses sent directly by the federal government to pharmacies and other locations are counted, only 65% of doses in the state have been used, according to Bloomberg’s analysis.

Early in the vaccine drive, West Virginia focused on its older population and has now shifted to those in their teens to mid-30s, where most new Covid-19 cases are turning up, said Clay Marsh, the state’s Covid-19 czar.

“We’re seeing more incidents of more people needing more convincing or needing more time to make their decision,” he said. “We’re right on that interface of having more vaccine than arms to put them in.” 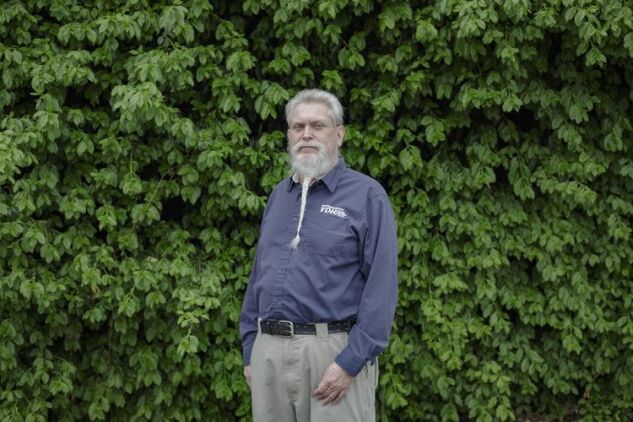 Statewide data can obscure what’s going on at a local level.

About 45% of Charlottesville’s 47,200 residents have received at least one dose, according to Virginia Department of Health data. Demand has remained high enough that the Blue Ridge Health District, which includes Charlottesville, restricted access. Not until Monday did the district open eligibility to people 16 and older, in line with Governor Ralph Northam’s goal of allowing everyone in the state to get a shot by the beginning of next week.

In Lynchburg, eligibility officially opened to everyone 16 and older April 5. Even before that, restrictions weren’t much enforced. Still, only about 29% of the city’s 82,000 residents have received at least one dose, according to health department data. If it were a state, Lynchburg’s vaccine rate would rank near the bottom, just above Alabama and Mississippi.

“At first we didn’t have enough vaccine, and now that we have a pretty good supply, the demand isn’t there,” said Kerry Gateley, health director for the Central Virginia Health District that Lynchburg falls under.

Unvaccinated pockets around the country give the virus room to spread and, perhaps worse, the ability to evolve. Experts worry that’s a perfect recipe for virus variants.

“They have the opportunity to undo the gains that we’ve worked so hard to achieve,” Sifri said. 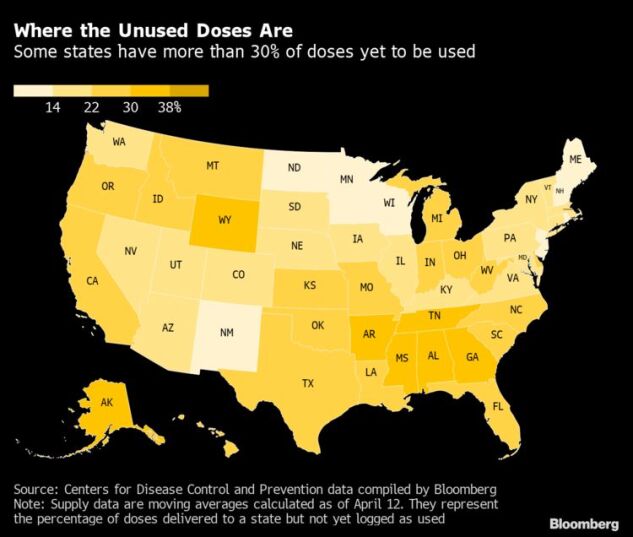 For Gateley, this will be especially critical given Lynchburg’s large evangelical community. Liberty University, the city’s largest employer, was founded by Southern Baptist pastor and televangelist Jerry Falwell Sr. Liberty clashed with health officials early in the pandemic when it quickly brought students back to in-person classes. But the university also owns and is leasing to the city a shuttered TJ Maxx store for a mass vaccination clinic, Gateley said. Liberty declined multiple requests for comment.

In Charlottesville, UVA Health has loaned the Blue Ridge Health District an array of resources, including running one of the city’s mass clinics and helping lead 28 outreach events in February and March. That, and the region advocating for more doses, should help boost vaccinations, according to Ryan McKay, Covid-19 incident commander for the Blue Ridge Health District.

“We anticipate we’re going to see a pretty big increase in the number of doses we administer,” McKay said.

To contact the authors of this story:
in Washington at aedney@bloomberg.net

in New York at darmstrong17@bloomberg.net

To contact the editor responsible for this story:
at eschine@bloomberg.net