More U.S. companies have sought bankruptcy protection during the last two days than in the prior two weeks combined, data compiled by Bloomberg show. The seven filings since Sunday exceeds the month’s five through June 13, which was relatively light for companies seeking shelter from creditors.

The Chapter 11 spree was a mix of consumer names like and , plus energy, health care and two new software filings.

’s Chapter 11 makes this a record year for software bankruptcies, with four cases so far. Technology overall is having its busiest year since 2009. 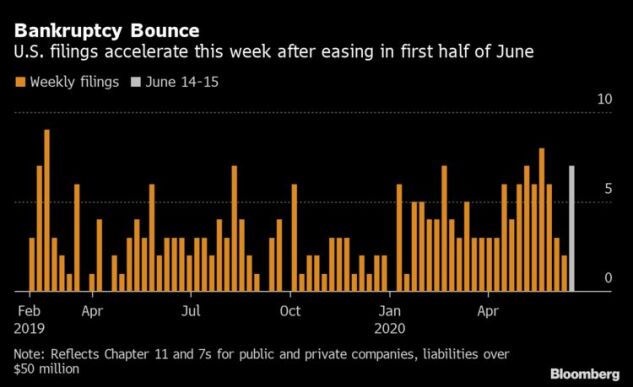 This week’s filings pushed the year’s bankruptcy total to 111, the most since 2009 for the first six months of a year, data compiled by Bloomberg show.

Filings from the consumer cyclical sector total 32 year-to-date, the most for any comparable period since 2009, when there were 41. Consumer non-cyclical filings total 26 -- also highest since 2009 -- and the sector remains under pressure from lockdowns that have crushed demand. 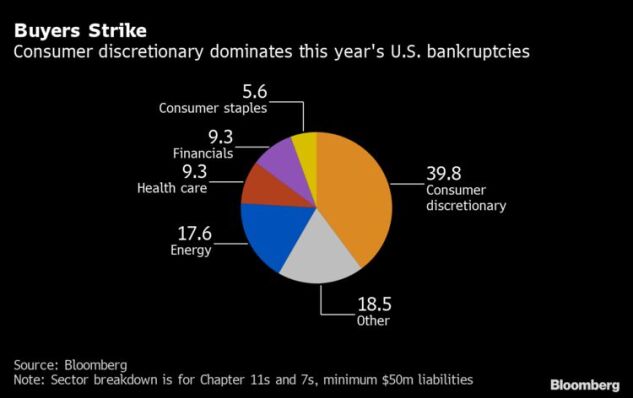 The energy sector is the second biggest contributor to this year’s bankruptcy surge. is preparing a filing that could hand control to senior lenders, according to people with knowledge of the matter. Meanwhile, got an until June 30 to make interest payments originally due May 29.

and Chesapeake were among the 10 issuers with the most debt trading at distressed levels that hadn’t filed for bankruptcy as of June 15, data compiled by Bloomberg show.

The amount of distressed bonds and loans outstanding fell to $350 billion as of Monday’s open, a 10% decline since June 5. It’s down from $544 billion on May 15, data compiled by Bloomberg show, and the distressed bond universe is shrinking faster than that of leveraged loans.

There were 708 from 387 issuers as of June 12, up slightly from the previous week but down significantly from the 1,896 issues from 892 companies at the March 23 peak. 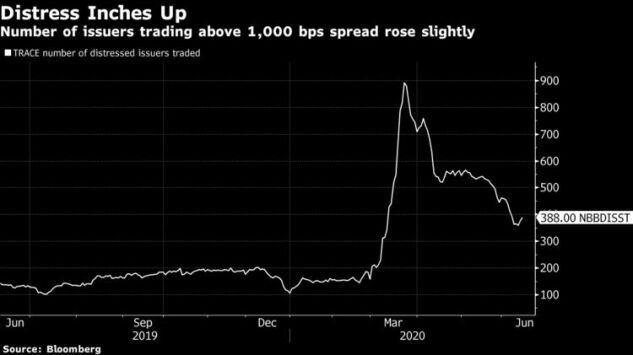 Intervention by the Federal Reserve injected liquidity that lifted credit across the board. But Bloomberg Intelligence analyst says corrections are common in highly-volatile distressed cycles and points to an easing in April 2008, which didn’t last.

“Unprecedented cash burn and unemployment will drive distressed supply to new highs,” in a June 2 analysis.

To contact the reporter on this story:
in New York at jcrombie8@bloomberg.net

To contact the editors responsible for this story:
at sharrington6@bloomberg.net