The first doses of a Covid-19 vaccine should go to front-line health-care workers and first responders, followed by people at higher medical risk from the virus, said a group of scientists and academics advising the U.S. government.

The draft guidelines released Tuesday were developed by the National Academies of Sciences, Engineering and Medicine. Their recommendations will help U.S. health officials come up with a final plan to distribute a vaccine, once one is available.

“The primary goal of the committee’s allocation framework has a dual focus: maximization of benefit through prevention of morbidity and mortality and through reduction in transmission,” the panel said in the report.

The recommendations break the population into four groups, with the goal of targeting people both at high risk from the virus, and at risk of spreading it to others.

Group one includes front-line health workers and first responders, followed by people with health conditions that put them at risk as well as older adults in dense living settings. The group includes about 15% of the U.S. population, according to the report.

“Front-line health care workers are particularly important in stemming the pandemic and preventing death and severe illness,” according to the report. “Vaccinating these individuals not only enables them to provide these services, but also reduces the risk that they will spread the infection as they work in hospitals, nursing homes, assisted living facilities, home care, and group homes, or return to their own homes.” 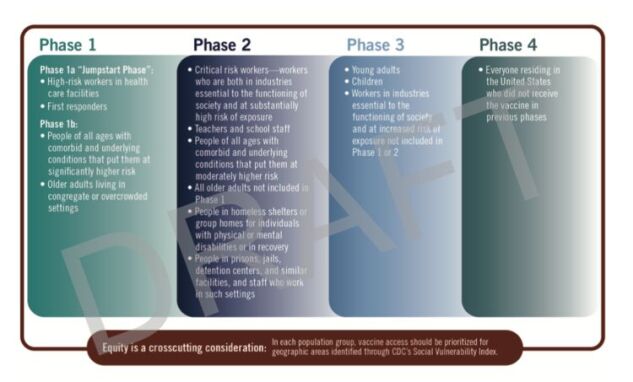 A table from the draft report on which groups of people will be prioritized for access to a potential Covid-19 vaccine.
Source: The National Academies of Science, Engineering and Medicine

Group two includes essential workers, teachers and school staff, people in jails, prisons or homeless shelters, and people with moderate-risk conditions as well as older people not in group one. Along with the first group, this second phase would cover as much as 50% of the U.S. population, according to the document.

Doses of any vaccine are expected to be limited in the months after one first becomes available, making it important to prioritize who gets them. For example, if two vaccines are cleared for use in October, the Centers for Disease Control and Prevention expects that at most 10 million to 20 million doses will be available in November, Kathleen Dooling, an epidemiologist with the agency, said at an Aug. 26 meeting of CDC advisers.

There are about 20 million health-care workers in hospitals, long-term care facilities, pharmacies and other settings around the country, Dooling said. In addition, there are about 60 million to 80 million people in “essential worker” roles such as food and agriculture, education and law enforcement, according to Dooling.

States have been asked to get a plan for distributing vaccines to the federal government by the start of October, according to health officials with the states of California and North Carolina.

Most Americans likely won’t be able to get a vaccine until , according to Anthony Fauci of the White House Coronavirus Task Force and others. How widely a shot is given will also depend on how clinical trials are faring. The FDA could first authorize use of a vaccine in a narrow, high-risk group while more data are collected, only allowing it to be given to the general public after wider trials are complete.

“Full approval for the general population, where people can go to CVS and get a shot, that’s really a 2021 event,” former Food and Drug Administration Commissioner said on CBS’s “Face the Nation” on Sunday. CVS Health Corp. is one of the U.S.’s biggest drugstore chains, and pharmacies are often used for administration of vaccines like the flu shot.

The non-profit National Academies was charged by the National Institutes of Health and the CDC with creating a framework for how to fairly and equitably distribute a vaccine. The group advises the U.S. government on matters of science.

The National Academies panel will meet Wednesday to listen to public comments on the draft.

Changes could happen. It’s possible that a vaccine will work better in one population versus another, or have storage and transport requirements that limit its use.

Final-stage trials of the leading vaccines are underway. AstraZeneca Plc, the U.K. drugmaker developing a shot invented by researchers at the University of Oxford, said Monday it had . Pfizer Inc. and Moderna Inc. also have final-stage tests of their experimental vaccines ongoing.

Pfizer has said it could have preliminary results by October, and President Donald Trump has said that he expects there will be a vaccine by election day on Nov. 3. Few other officials have echoed Trump’s timeline, which has raised questions about his on the FDA to help his reelection chances.