Getting screened at the airport by the is not a socially distant experience. Your electronics and shoes go right into a plastic bin that ferried someone else’s through the X-ray machine just minutes before. You hand your ID to an officer sitting much closer than 6 feet away. And if something doesn’t look right, there’s the ultimate close contact with a stranger: the pat-down.

With airlines and more people navigating checkpoints, the federal agency responsible for the safety of the traveling public says it’s going to great lengths to make its screening process safer during the . It’s spacing flyers apart in queues, reducing the number of “touch points” at the start of screening, putting up plastic barriers at bag-drop points, wiping down bins, and requiring screeners to wear masks.

But TSA is at heart a security agency, and there’s no substitute in its screenings for some person-to-person contact—even though that’s how the novel coronavirus spreads. The TSA’s roughly 50,000 agents, working in more than 400 airports, now have to balance security concerns with infection risks in the on mask-wearing or social distancing. The agency is also under pressure to screen passengers for symptoms of Covid-19, something in which it lacks expertise. 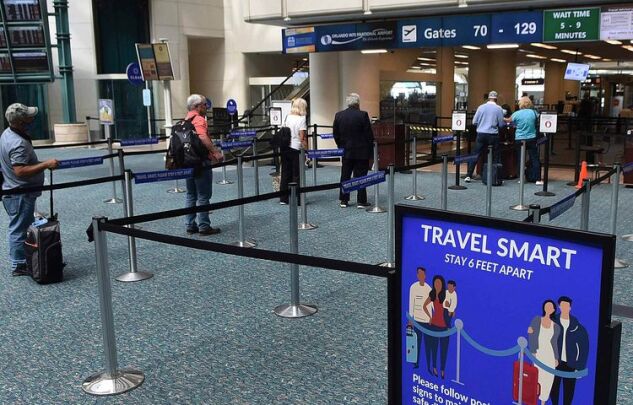 Earlier this month, Jay Brainard, the top TSA official in Kansas, turned whistleblower and accused the agency of not doing enough to protect employees or passengers. He said the TSA was slow to require employees to wear masks (it in early May) and implement stronger sanitizing protocols.

Already, roughly 700 TSA employees have tested positive for Covid-19, and five had died as of mid-June, according to the agency’s website.

Among other things, Brainard criticized the agency, which is part of the , for requiring screeners to change gloves only every half hour, or when passengers ask. “Oftentimes, passengers will stick their boarding pass and ID in their mouth as they’re getting ready to hand documents to our people,” Brainard said in an interview. “If we don’t change those gloves, if we don’t sanitize those gloves, then we’re going to potentially infect the next people in line.”

The agency said in a statement that personnel change nitrile gloves “after each pat-down,” and noted that it “developed plastic barriers for use at several locations within the checkpoint area” as a safety measure.

The coronavirus is more often transmitted between people in close physical proximity via respiratory droplets than through shared surfaces, according to the Centers for Disease Control and Prevention, although both can lead to infection. “Physical distancing is incredibly important for this specific virus,” says Surili Sutaria Patel of the American Public Health Association.

Members of Congress and the , a group that represents about 300 U.S. and Canadian airports, have called on the federal government to mandate face coverings in airports. But so far, there’s no federal standard, either from the or the TSA. (Airlines and an increasing number of airports are requiring masks, however.)

TSA officials wouldn’t directly answer whether the agency has the authority to require passengers to wear masks, or whether that should be required. The FAA said in an emailed statement that it won’t force people to wear masks, nor will it require airports to enforce social distancing.

The result is different rules from airport to airport—even within airports—and confusion over who is setting and enforcing them. “It’s like an amoeba; you can’t grab it and figure out who has what responsibility for doing what,” says , president of the and chair of the TSA’s aviation security advisory committee. At Seattle-Tacoma International Airport, for example, the Port of Seattle’s policy explicitly says face coverings must be worn in public areas but says travelers “should” wear them during the TSA screening process.

As more travelers return to airports, social distancing will be a challenge during TSA screenings, for which there is also no federal standard. The space designated for security within airports is finite. At Seattle-Tacoma, officials have roped off every other lane so passengers can spread out in the screening line. But that won’t necessarily work with larger numbers of people: The airport has a relatively small physical footprint for the number of passengers it serves, says Perry Cooper, airport media relations manager.

Meanwhile, major airlines want the TSA to expand its screenings to check for symptoms of Covid-19. , which represents carriers such as , , and , is pressuring the TSA to . The agency hasn’t publicly said it will do that, and a number of former TSA officials and members of Congress say it’s ill-equipped to add health screenings to its mandate.

“TSA, as its name implies, is a security agency, designed to keep bad guys—bad people—off planes,” former agency Administrator says. Burdening agents with unfamiliar new duties could detract from that focus. “The consequences, if there was a successful terrorist attack and the first one in the U.S. on a plane since [Sept. 11]—what that would do? It would probably put some small carriers out of business, and just wreak havoc with the economy,” says Pistole.

Representative (D-Miss.), chairman of the Homeland Security Committee in the House of Representatives, asked Acting DHS Secretary to provide his committee with a legal justification for any proposed airport-based federal temperature check program in a June 16 letter. He also questioned the effectiveness of temperature checks, citing CDC guidance, and called on the agency to perform the checks in a way that protects workers, maintains passenger privacy, and prevents discrimination.

“Given that COVID-19 disproportionately affects certain demographics, any such protocols must be designed to guard against passengers from certain racial or ethnic minorities being targeted for screening in a discriminatory fashion,” Thompson wrote.

The potential for discrimination also complicates an additional strategy that could reduce overall physical interaction with passengers: risk-based screening, which focuses on high-risk passengers. , associate director-counsel at the , points to studies that show that Black women are more often pulled aside for additional screening because scanners cannot properly read their hair.

Likewise, what counts as suspicious behavior is based on an individual officer’s perception and could be affected by virus-related anxiety. “People might be nervous because it’s the first time they’ve flown since the pandemic struck, and that’s a typical ‘tell’ of a suspicious activity previously. And that, I think, is not dispositive now in this new normal,” says Pistole.

The TSA was making changes to screening procedures before the onset of the coronavirus. It had started using scanners to validate IDs and verify passenger boarding information. In some airports, passengers now hand only their ID—not their boarding pass—to an officer at the front of the checkpoint. That eliminates one touch point between passengers and workers, the agency said in a statement. As of mid-June, the agency had set up about 550 scanners, roughly 35% of the total number they’d need to use the technology at airports nationwide.

Jorhena Thomas, a national security professor at American University, says “Band Aid-type of changes” won’t be sufficient in the long term. “What they need to do is anticipate how terrorists and other people that may be a threat are going to take advantage of this current situation,” with the virus and changing procedures, “and then come up with a sustainable strategy that meets public health needs and also meets security needs,” she says.

The TSA received $100 million under the coronavirus relief package signed into law in March. It had spent less than $1 million of that as of early June, according to a senior congressional Republican aide. It hasn’t asked congressional appropriators for more resources to handle the virus.

“One of the things that we are responsible for, and that’s our primary mission, is security,” Brainard, the TSA supervisor-turned-whistleblower, says. “But now, an equal part of our responsibility is to make sure that we’re giving attention to safety.”

To contact the authors of this story:
in Arlington at crozen4@bloomberg.net