The first round of coronavirus aid to small businesses was a boon to rural states that backed President but haven’t been hit as hard by the pandemic as Democratic strongholds on the coasts, contributing to rising political tensions over a multi-trillion-dollar relief effort.

The skewed distribution doesn’t necessarily point to regional or political bias in the Paycheck Protection Program’s administration or design, which is first-come, first-served. In many cases, smaller lenders who have close relationships with small-town business owners played a outsized role in issuing loans by moving quickly to tap the program.

Yet the disparity adds to a litany of complaints about the Small Business Administration program, which is already on a second round of funding, and to the partisan rancor as Congress begins considering still more pandemic relief.

“It is incongruous that these rural states are benefiting most as they have been for the most part least hurt by the virus,” said , chief economist for Moody’s Analytics. The loan program “has fallen well short of helping small businesses in the states that have been hardest hit by the virus.”

Of the 10 states that had the largest shares of approved loans as a portion of eligible payrolls in the aid program, eight of them backed President in the last election.

Firms in Nebraska, for example, -- a solidly Republican state Trump won by 20 points in 2016 -- got enough money to cover 81% of the state’s eligible payrolls. That’s more than double the share in two big Democratic-dominated states, New York, where approved loans covered 40%, and California at 38%, according to an analysis of government data by , an economist with Evercore ISI. 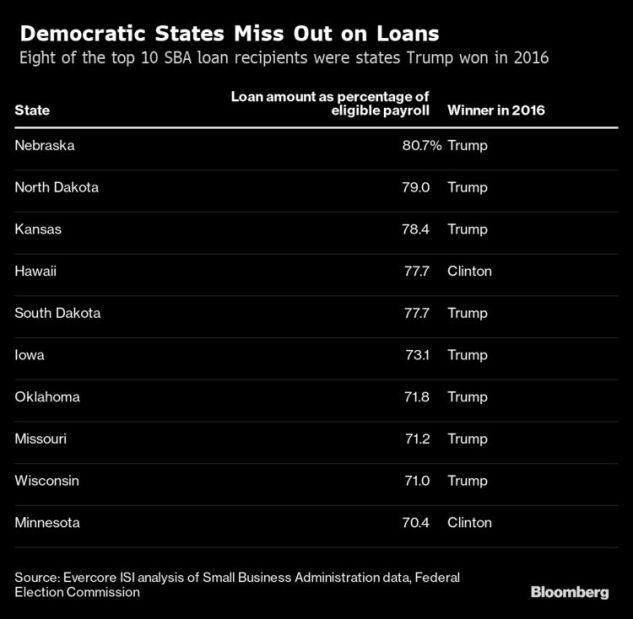 conducted by researchers at the University of Chicago’s Booth School, the Massachusetts Institute of Technology’s Sloan School and the National Bureau of Economic Research, found that only 15% of firms in congressional districts hardest hit by the coronavirus and job losses received loans in the first tranche versus 30% of firms in the districts least affected by the pandemic.

Congress provided a $320 billion infusion of funds for the small business aid that began flowing on Monday, after an initial $349 billion was exhausted in just 13 days on April 16, and scrutiny of the program has intensified. Treasury Secretary said Tuesday that all loans of more than $2 million would be audited to ensure they were justified.

Democrats as well as some Republicans have complained that the clunky, confusing rollout of the small-business loan program caused frustration and let some big banks move favored customers to the head of the line.

“My patience has run out with the mismanagement of the PPP. Heard from numerous small business owners yesterday that they AGAIN cannot access @SBAgov loan portal,” Missouri Republican Senator tweeted Tuesday. His state was among the top 10 in proportion of approved loans to eligible payrolls in the first round of loans.

A dozen Democratic House members from California led by Representative sent a letter last week to the Trump administration saying they were “concerned” by loan distributions that didn’t “adequately reflect” California’s proper share. Speier was harsher in a tweet, calling the state’s portion of approved loans “pathetic” and declaring, “I’m hard pressed not to think that this is political.” 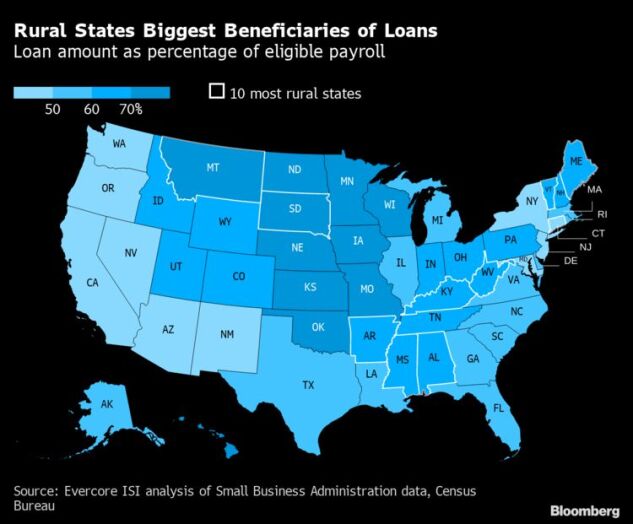 A disproportionate share of the first batch of loans from the Paycheck Protection Program originated through community banks and smaller chains: About 60% of the loans were made by banks with no more than $10 billion in assets, according to a statement by the Treasury Department and Small Business Administration. Overall, such banks account for less than 20% of commercial and industrial lending, according to the Federal Reserve.

The nation’s four largest lenders (, , , and ) disbursed less than 3% of PPP loans in the first tranche; they usually account for more than one-third of all small business loans, according to the MIT-University of Chicago study.

A second wave of loans from the new funding could flow differently. More of the new money may go to metropolitan areas because of greater pent-up demand as banks stockpile applications, Tedeschi said. Still, it also may be that lenders in more rural states have an advantage that will again allow them to capture a disproportionate share, he said.

The loans’ initial impact in Red America is one more reason for Republican lawmakers’ eagerness to throw their support behind another half trillion dollars in spending in order to keep the program going. 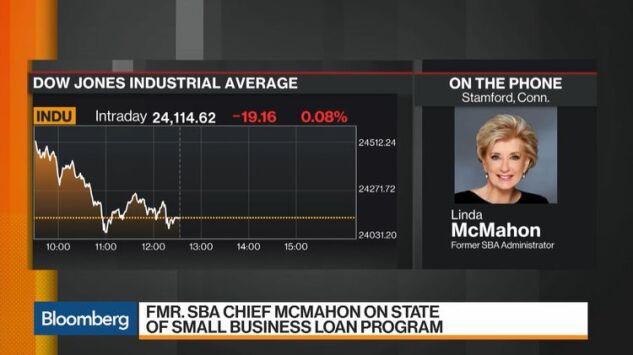 It’s why 11 employees at the Driesen Eye Center in Sioux Center, Iowa, went back to work on Monday, deep cleaning the office and preparing for reopening when a state order closing optometrists’ offices ends Friday. The business received a $95,200 loan, disbursed last week.

Scott Driesen is used to poking his head in bank president Eric Walhof’s office to talk sports and the weather when he does business at Northwest Bank of Sioux Center, a farm town of 5,900 where the grain elevator towers over Main Street and the scent of manure is in the wind. So when he read about the loan program on a professional message board, he sent Walhof an email and got a response within hours.

“He walked me through every step, and we basically had our application ready even before it was time to send it in,” Driesen said.

The Sioux Center bank and affiliates with , a holding company with $1.8 billion in assets that owns banks in northwest Iowa and Nebraska, had teams of loan officers and credit analysts working into the night and through the weekends to get as many loans as possible approved before the funding ran out, Walhof said. They issued more than 1,200 loans worth more than $180 million before the SBA halted approvals.

There was “a lot of confusion and lots of pivots and conversations, but it was to be expected,” Walhof said. “Just put your head down and go.”

Rural borrowers still ran into plenty of problems.The government waited until just days before funds ran out to clarify that farmers could use their income tax Schedule F, the form to report farm income, for documentation rather than Schedule C, a form for small business income that farmers typically don’t file. Many banks also had trouble connecting with the SBA’s electronic transaction system and call centers for technical help were overwhelmed.

Even banks that were already approved SBA lenders, in many cases found their log-in credentials were locked because of disuse or couldn’t locate their passwords, said , president and chief executive officer of the Indiana Bankers Association.

Fifteen Indiana banks hadn’t been able to access the transaction system as of April 10, Van Til added.