President ’s new chief of staff, , has escalated tensions in the White House with a swift series of staff changes that have drawn complaints from some in the West Wing about his management style, according to people familiar with the matter.

Trump changed his top aide last month just as the U.S. coronavirus outbreak began to accelerate. After a slow start -- Meadows didn’t resign his North Carolina House seat until the end of March -- the new chief of staff kicked off his tenure by ousting a top legislative liaison last week and then, on Monday, replacing the White House press secretary, . 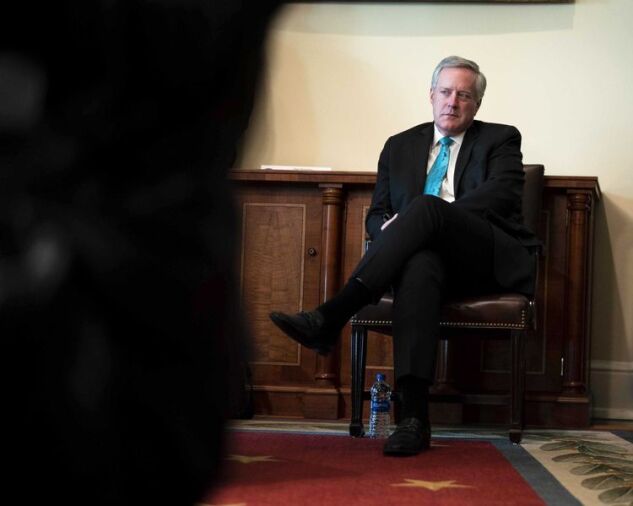 Other aides may depart in the near future, including the chief of domestic policy, , according to two people familiar with the matter.

Meadows has also gotten involved in the administration’s coronavirus response, calling Republican governors who have held out against issuing stay-at-home orders in their states to ask them to implement the policies immediately, according to two people familiar with the calls. The president has said such decisions are up to state leaders and has not publicly criticized those who decline, who are all Republicans.

It is typical for chiefs of staff to make changes and hire familiar faces upon entering the White House, but the turnover has been more frequent under Trump because he is on his fourth chief in less than four full years as president.

Meadows has demonstrated a firm grip on the issues and is working to ensure that everyone at the White House is carrying out the president’s agenda, according to one senior administration official. Meadows didn’t respond to a request for comment.

The White House was already on its heels as Trump confronts the coronavirus outbreak, which has collapsed the U.S. economy and swiftly become both the greatest crisis of his presidency and a severe threat to his re-election in November.

Meadows’s moves -- especially Grisham’s replacement, which she and her staff learned was under consideration in a report last week by Axios -- have suddenly dialed up tension in a building that has long been riven by infighting, according to multiple people familiar with the situation.

Meadows told Grisham over the weekend he wanted her to give up the press secretary position and serve only as the White House communications director. She declined, according to two people familiar with the matter.

Grisham has a powerful advocate in the White House: first lady , who promptly brought the ousted press secretary back to the East Wing as her personal chief of staff. The only formal announcement about the staff changes on Tuesday came from the first lady’s office, which some of the people suggested was a sign of her displeasure.

All of the people asked not to be identified discussing internal White House tension. The White House formally announced the new communications hires Wednesday in a brief, 84-word statement.

Top aides still have confidence in Meadows and are trying to work with him. But there is concern that he hasn’t spent time getting to know how the West Wing works before making aggressive changes, the people said.

Meadows pushed out other aides ahead of Grisham. He told people he believed Jessica Ditto, who had worked for Trump since the 2016 campaign, wasn’t a team player and she later decided to resign, according to two people familiar with the situation. Mike McKenna, a deputy to legislative director , also resigned last week, and it is unclear how long Ueland will remain in the White House under Meadows.

Ditto had been the primary White House spokeswoman for , who called her “talented, smart, driven and a joy to know” in a statement after she resigned.

The moves have damaged morale inside the West Wing, as staff have begun to fear the possibility of a broader shakeup. Some aides have come to Meadows with recommendations about which staffers he should oust, further raising anxiety, according to one person familiar with the interactions.

Meadows’s immediate predecessor, , had lost Trump’s confidence and was barely involved in the coronavirus response effort before he was last month. But while Mulvaney had internal foes, he was regarded as promoting a more collegial atmosphere inside a West Wing known for its knife-fighting.

The new chief of staff, by comparison, has jumped into some of the touchiest debates in the coronavirus crisis.

In a White House meeting on Monday, Meadows sided with Health and Human Services Secretary against Centers for Medicare and Medicaid Services Administrator , according to people familiar with the situation. Azar wanted to provide $30 billion in grants to health-care systems; Verma wanted to provide $34 billion in loans. Verma announced both the grants and loans at a White House news conference on Tuesday.

Azar and Verma have had a contentious relationship with multiple policy disagreements, to the point that Vice President instructed them in a December meeting to get along. HHS declined to comment on the Meadows meeting and CMS didn’t respond to a request for comment.

Meadows has also tried to persuade a group of holdout Republican governors that they should issue shelter-in-place orders to help curb the coronavirus outbreak. It isn’t clear if the new chief of staff has Trump’s blessing for the calls. The president has publicly said it is up to governors and local leaders to decide whether stay-at-home orders are appropriate and has declined to criticize the holdouts, all of whom are his political allies.

The governor of one of the holdout states, of South Dakota, tweeted Wednesday that she’d spoken with , the director of the National Institute of Allergy and Infectious Diseases, who is a top medical adviser to the president. “Thankfully, he AGREES that a one-size-fits-all approach isn’t the answer in our state,” Noem wrote.

The tweet, according to one person familiar with the matter, was read by some as a signal to Meadows.