Mobile-phone location data from people who attended President ’s rally in Oklahoma show that most came from outside Tulsa, hailing from at least 44 counties spread across 12 states. Covid-19 is on the rise in 33 of them. 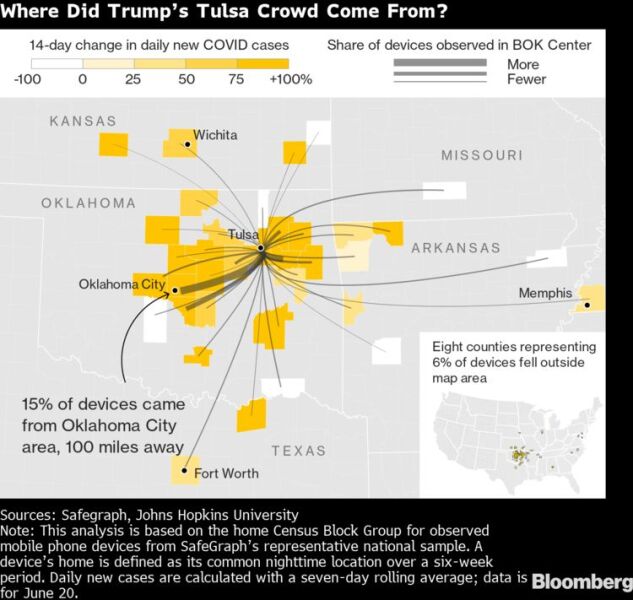 Trump supporters traveled from across the Oklahoma region for the June 20 event, according to a Bloomberg analysis of data from SafeGraph. They didn’t fill the arena though and public health experts say the extra space may have lessened the risks of transmission.

Even so, it was far from a small gathering. Tulsa’s fire department estimated the crowd at the BOK Center numbered 6,200, making it the largest indoor event in the U.S. since March. 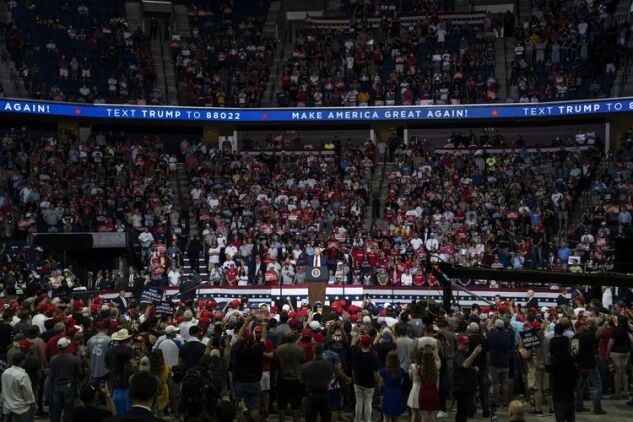 The event in downtown Tulsa, Oklahoma, on Saturday attracted far fewer supporters than Trump and his advisers had promised.
Photographer: Go Nakamura/Bloomberg

People came from places including Tarrant County, Texas — home to Fort Worth — where new cases were up more than 50% in the two weeks before the rally. There’s also Shelby County, Tennessee, where Memphis is located, which put plans to loosen restrictions on hold last week after new infections spiked, and Wake County in North Carolina, where the state capital of Raleigh is and the virus is spreading faster than anywhere else in the state.

All three states and Oklahoma are seeing rising case numbers. The virus has spiked in Texas, with record new numbers reported in each of the past three days, prompting Governor to halt the state’s reopening. On Friday, he ordered all bars to close by noon after the state’s positive-test rate topped 11%. Oklahoma also reported a record number of new infections.

Trump supporters expressed varying levels of concern about the virus. Some donned masks when they went inside and acknowledged some anxiety, while others scoffed.

Steve Jimenez drove 300 miles from Fort Worth to attend the rally. He said the virus is a hoax.

“It’s about control,” Jimenez, 61, said while camped outside the arena on the eve of the rally. “The numbers are fabricated. They’re not real.”

Just hours before the event, it was announced that in Tulsa had tested positive. On Monday, two more staffers who attended the rally were diagnosed with Covid-19, making it likely that the virus was circulating within the arena on Saturday, given where people were coming from and the dearth of masks. How widely infections may spread after attendees head home won’t be known for weeks as it can take two to 14 days for symptoms to show.

“The one thing that might help save having a major event was the fact that the BOK Center was not full,” said Dale Bratzler, a doctor and professor at Oklahoma University’s Hudson College of Public Health in Oklahoma City. The arena, with a capacity for 19,000, had empty seats throughout its upper levels. 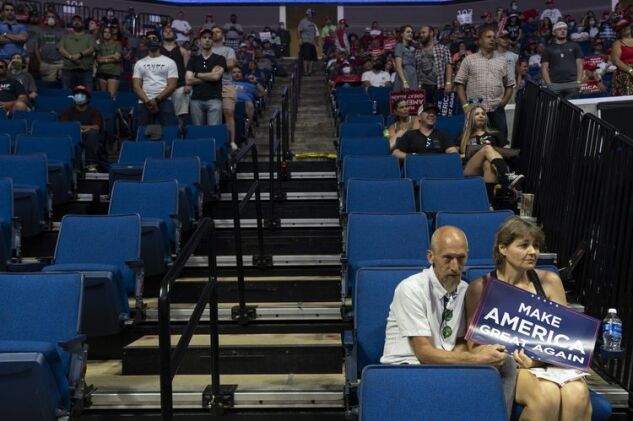 Attendance was far smaller than the overflow crowd that the president and campaign officials had promised.
Photographer: Go Nakamura/Bloomberg

Even so, “people were still congregating together,” said Catherine Troisi, an infectious disease epidemiologist at the UTHealth School of Public Health in Houston. “There was still a lot of opportunity for spread, particularly because there wasn’t a lot of masking.”

Most rally-goers from the sample analyzed were in-state, including 40% from Tulsa itself. The county accounts for the biggest share of infections in the state, with 2,949 of Oklahoma’s 11,948 total cases. Oklahoma City, where average new cases were up more than 75% in the two weeks before the rally, was also well-represented: 15% came from four counties in the region.

“I pretty much resumed my normal life, but I’m not in contact with a lot of people anyway,” he said by phone Tuesday. “I feel completely fine.”

Others are being more cautious. Gabrielle Gilliam, 62, is back to social distancing after returning to Muskogee, Oklahoma. She booked a doctor’s appointment for Thursday and planned to get tested, even though she didn’t have any symptoms.

“I’m very glad that I went,” she said. “I’m usually more of a cautious person, but this for me personally was important.”

Counties with relatively few cases could be at risk if attendees brought the virus home. Douglas County, Missouri, outside Branson, had the largest share of out-of-state devices observed at the BOK Center. Its first coronavirus case was reported on May 30. It had three confirmed cases as of June 20.

On Wednesday, Tulsa County officials said the impact of the rally, and other events including a Juneteenth celebration on June 19, on local case numbers isn’t yet clear.

“There were a number of events and large gatherings in our community last weekend — it’s still too soon to know the outcome from these events,” Tulsa Health Department Director Bruce Dart said at a press conference Wednesday.

At the Juneteenth event, speakers including addressed a crowd of hundreds in the city’s Greenwood District.

More of the Juneteenth attendees wore masks than those at the Trump rally, and the celebration was entirely outside. The Trump rally drew protesters to the streets around the BOK Center. 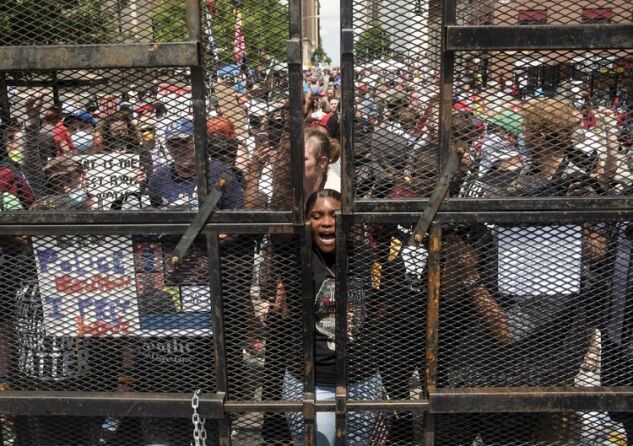 “We do know that being outside is safer,” said Troisi, the UTHealth epidemiologist. “The best ways to spread infection are close contact, inside, and not wearing a mask and not keeping physical distancing.”

The Tulsa Health Department is encouraging anyone who attended the events to get tested within five to seven days, spokeswoman Leanne Stephens said in an email.

The anonymized data from SafeGraph includes a representative sample of millions of mobile phones nationwide and isn’t definitive. Some Trump supporters who spoke with Bloomberg came from places that aren’t captured in the data sample — such as Rudy Hernandez, who said he drove with his wife from Tucson, Arizona, to attend the rally.

Hernandez was interviewed before the couple entered the rally and again on Wednesday after they returned home. They stayed on the edge of the crowd while waiting to be let into the arena, he said, and wore a mask once it was time to go inside.

Hernandez turns 54 on Saturday. He said he plans to get tested soon for the virus, in part because he’s applying for an oilfield job overseas and knows it will be easier to travel if he’s tested negative.

“Everything is well,” he said. “We’re still wearing our masks.”

Methodology note: The Safegraph data analyzed for this story includes all devices observed in the BOK Center during the week of June 15 through June 21. While nearly all of the visits were detected on the day of the rally, the data does include a relatively small number of people, likely local maintenance and security staff, along with campaign advance teams, who were on the premises the other days of the week.

(Updates with Texas closures in fifth paragraph. An earlier version corrected the day of briefing in 19th paragraph)